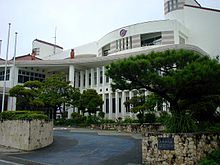 It was formed on January 1, 2006, from the merger of the town of Sashiki, and the villages of Chinen, Ōzato and Tamagusuku, all from Shimajiri District.

Translated literally, the name Nanjō means something like "the city of the southern castle". Many castle ruins, called gusuku in the Okinawan language, can be found throughout the city.

Of the eleven cities in Okinawa Prefecture, Nanjō has the smallest population. It does not have a separate police station nor a high school. For those services, citizens have to refer to the neighbouring towns of Yonabaru and Yaese. The city hosts a fire station responsible for Chinen, Ōzato and Tamagusuku and parts of Yaese, while Sashiki is served by a separate station.

The city's main economical activities are agriculture and tourism. Important crops include sugarcane, for sugar and vinegar production, and turmeric, a popular medicinal herb in Okinawa. Several turmeric processing plants are based in the city, producing semi-processed goods to be used by industries on the mainland or consumer products like tea and dietary supplements.

Nanjō is a city located in the southern region (南部 - Nanbu) of Okinawa's main island. The isle of Kudaka, off the coast of Chinen, also belongs to the city. 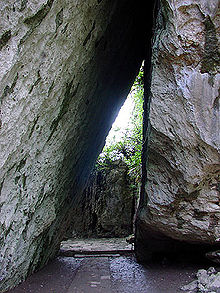 Located in Chinen, the seifa-utaki (斎場御嶽) shrine is listed by UNESCO as part of the Gusuku Sites and Related Properties of the Kingdom of Ryukyu World Heritage Site. It was believed to be a sacred place, from where one could see the "Isle of the Gods". In the shrine, noro priestesses from Shuri Castle would pray for the well-being of the king and the kingdom.

In Tamagusuku, the Gyokusendō cave with a total length of five kilometers is known for its beautiful stalagmites and stalactites. 850 metres of these caves are open to tourists. The cave is located inside a theme park, named Okinawa World. Other attractions of the theme park are native dances such as Eisa, a traditional Ryūkyū-style village and a Habu snake zoo.

Also located in Tamagusku, the Itokazu-Abuchiragama cave was used in World War II as a bomb shelter by soldiers and civilians alike. It is also open to tourists. Himeyuri Students were used as nurses in this location among others.

The isle of Kudaka, also called Isle of the Gods, can be accessed from Azama Port, located in Chinen.

From the isle of Ōjima, in Tamagusuku, one can board a "Glass boat", a boat with a transparent floor used in marine-life observations.

Shō Hashi was the leader of Sashiki-gusuku before uniting the Ryūkyū Kingdom.

In kanji, Tamaki has the same spelling as Tamagusuku (玉城). Neither name follows the standard readings for the kanji in Japanese.

Several lines serve the city of Nanjo, departing from the bus terminals at Naha and Itoman.