Santarém (Portuguese pronunciation: [sɐ̃tɐˈɾɐ̃j]) is a city in the Santarém Municipality in Portugal. The city itself has a population of 28,760[1] and the entire municipality has 64,124 inhabitants. It is the capital of Santarém District.

The present Mayor is Francisco Moita Flores, a former police detective and a television screenwriter, elected by the Social Democratic Party.

The municipal holiday is March 19.

The city of Santarém stands on a plateau, on the right bank of the Tagus river, 65 km northeast from Lisbon.

The region of Santarém has been inhabited since pre-historic times, first by the Lusitani people, and then by the Phoenicians, Greeks, Romans, Visigoths, Moors and Portuguese Christians. Of the various legends related to the foundation of Santarém, the most famous tells of the Visigoth Saint Iria (or Irene), who was supposedly martyred in Tomar (Nabantia) and whose uncorrupted body reached Santarém. In her honour, the name of the town (then known by its Latin name Scalabis) would later be changed to Sancta Irene, from which Santarém would eventually be derived. 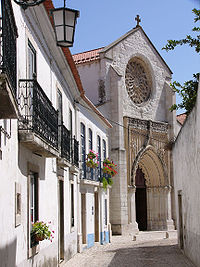 The foundation of the city is attributed to the Romans, who occupied the region in the 2nd century BC and named the city Scalabis. During the Roman period, Scalabis was an important commercial post in the mid-Tagus region, and was the administrative capital of one of the regions (Conventus Escalabitanus) of Lusitania.

After the period of Visigoth domination, Santarém was taken in the 8th century by the Arabs, under whose rule the city became an important cultural centre. Important Arab personalities born in Santarém (or Shantarin, in Arabic) are the poet and historian Ibn Bassam (died 1147) and the poet Ibn Sara (1043–1123).

The period of Muslim domination was finished in 1147 by the first King of Portugal, Afonso Henriques. According to the chronicles, the King and a small army managed to take the city after some men climbed the walls during the night and opened the gates. The story of the conquest of Santarém is told in a heroic tone in the mediaeval chronicle De expugnatione Scalabis, which celebrates and justifies the power of the first Portuguese King. From the military point of view, the conquest of Santarém and, in that same year, of Lisbon were crucial steps in the Reconquista of Portugal.

After the reconquest of the Santarém, the city was frequently visited by the Kings, and many feudal parliaments (Cortes) were held in Santarém. King Fernando I, in particular, was very fond of the city and chose to be buried in the Convent of Saint Francis (his tomb is now in the Carmo Museum in Lisbon). The city was indeed one of the most important in mediaeval Portugal, as attested by its large number of monasteries and its royal palace (now lost where the Cathedral stands). There are still enough examples of Gothic buildings in the city for it to be known as the "Capital of the Portuguese Gothic".

In the 15th century, during the period of Portuguese maritime explorations, expeditions like the conquest of Ceuta (1415) were planned in the royal palace of Santarém. Many important personalities related to this historical time are buried in the churches of Santarém. Pedro de Meneses, first governor of Ceuta (1415–1437) after the Portuguese conquest, is buried in a magnificent Gothic tomb in the Church of the Grace (Igreja da Graça). In the same church is buried Pedro Alvares Cabral, the navigator that discovered Brazil in 1500.

The following centuries represented periods of decadence for Santarém. The big earthquake of 1755 hit the city hard, and many historical monuments were lost. During the Napoleonic invasions (early 19th century) the city was invaded and pillaged.

In the second half of the 19th century many improvements reached Santarém, like canalised water, gas light, the building of a bridge over the Tagus and the railway (1861). In the 20th century the infrastructure of the city (education, housing, commerce) continued to improve, and the economy of the city remained mainly dedicated to the production of agricultural goods.

Santarém has a picturesque city centre with several monuments, including the largest and most varied ensemble of gothic churches in Portugal. These include fine examples of transitional Romanesque–Gothic, mendicant (plain style derived from the mendicant orders) and late (flamboyant) Gothic. In addition, the city has nice examples of Manueline, Renaissance, Mannerist and Baroque architecture. 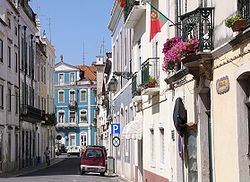 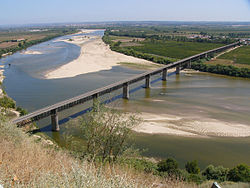 Tagus river seen from the Portas do Sol park, where Santarém Castle was located.