The Liberation Front of Mozambique, (FRELIMO) (Portuguese pronunciation: [fɾeˈlimu]), from the Portuguese Frente de Libertação de Moçambique, was a liberation movement which was founded in 1962 to fight for the independence of the Portuguese Overseas Province of Mozambique. At its 3rd Congress, in February 1977, it became a Marxist-Leninist political party and its official name became the Frelimo Party (Partido Frelimo).[1] Independence was achieved in 1975 after the Carnation Revolution in Lisbon and the movement/party has ruled Mozambique from then until the present, first as a single party, and later as the majority party in a multi-party parliament.

After World War II, while many European nations were granting independence to their colonies, Portugal, under the Estado Novo regime, maintained that Mozambique and other Portuguese possessions were overseas territories of the metropole (mother country), and emigration to the colonies soared. Calls for Mozambican independence developed apace, and in 1962 several anti-colonial political groups formed the Front for the Liberation of Mozambique (FRELIMO), which initiated an armed campaign against Portuguese colonial rule in September 1964. However, Portugal had ruled Mozambique for more than four hundred years; not all Mozambicans desired independence, and fewer still sought change through armed revolution.

FRELIMO was founded in Dar es Salaam, Tanzania on 25 June 1962, when three regionally based nationalist organizations – the Mozambican African National Union (MANU), National Democratic Union of Mozambique (UDENAMO), and the National African Union of Independent Mozambique (UNAMI) merged into one broad based guerrilla movement. Under the leadership of Eduardo Mondlane, elected president of the newly formed Mozambican Liberation Front, FRELIMO settled its headquarters in 1963 in Dar-es-Salaam. The Rev. Uria Simango was its first vice-president. Headquartering the movement in Mozambique would not have been practicable because of the intolerance of the Portuguese for nationalist movements and the strength of the police. (The three founding groups had also operated as exiles.) Tanzania and its president, Julius Nyerere, were sympathetic to the Mozambican nationalist groups. Convinced by recent events, such as the Mueda massacre, that peaceful agitation would not bring about independence, FRELIMO contemplated the possibility of armed struggle from the outset, although it did not launch its first attack until September 1964.

During the ensuing war of independence, FRELIMO received support from China, the USSR, the Scandinavian countries, and some non-governmental organisations in the West. Its initial military operations were in the North of the country; by the late 1960s it had established "liberated zones" in Northern Mozambique in which it rather than the Portuguese constituted the civil authority. In administering these zones it was necessary for FRELIMO to tangibly improve the lot of the peasantry in order to receive their support. It freed them from subjegation to landlords and Portuguese-appointed "chiefs", and established cooperative forms of agriculture. It also greatly increased peasant access to education and health-care—the latter often administered by FRELIMO soldiers assigned to medical assistance projects. Its practical experience in the liberated zones lead FRELIMO increasingly toward a Marxist policy. FRELIMO came to regard economic exploitation by Western capital as the principal enemy of the common Mozambican people, not the Portuguese as such, and not Whites. Thus, although an African nationalist party, it adopted a non-racial stance, and in fact included a number of Whites and mulattoes among its members.

The early years of the party, during which its Marxist direction evolved, were the occasion of some internal turmoil. The line described above: that is, to fight not merely for independence but also for a change to a socialist society, was championed by Mondlane, along with dos Santos, Machel, Chissano and a majority of the Party's Central Committee. The socialist position was approved by the Second Party Congress, held in July 1968. Mondlane was reelected party President and Uria Simango was re-elected vice-president.

After Mondlane's assassination, Uria Simango took over the leadership, but his presidency was disputed. In April 1969, leadership was assumed by a triumvirate comprising Samora Machel, Marcelino dos Santos and Uria Simango. Simango was ousted in November 1969 and left FRELIMO to join another small liberation movement COREMO (Revolutionary Committee of Mozambique).

FRELIMO initially established some "liberated" zones (countryside zones with native rural populations controlled by FRELIMO guerrillas) in Northern Mozambique, and the strength of the movement gradually grew over the ensuing decade. As FRELIMO's political campaign gained coherence, its forces advanced militarily, controlling one-third of the area of Mozambique by 1969, mostly in the northern and central provinces. However, it was not able to take control of any urban centre, including none of those small cities and towns located inside a "liberated" zone. In 1970 the guerrilla suffered heavy damage due to Portugal's Gordian Knot Operation (Operação Nó Górdio), which was masterminded by Kaúlza de Arriaga. By the early 1970s, FRELIMO's 7,000-strong guerilla force had wrested control of some parts of central and northern Mozambique from the Portuguese authorities and was engaging a Portuguese force of approximately 60,000 soldiers. In 1975, after the April 1974 Carnation Revolution, and the overthrow of the Portuguese Estado Novo regime, Portugal and FRELIMO negotiated Mozambique's independence, which came into effect in June of that year. FRELIMO then established a one-party state based on Marxist principles with Samora Machel as President. The new government received diplomatic and some military support from Cuba and the Soviet Union. Marcelino dos Santos became his vice-president while Uria Simango, his wife Celina and other prominent Frelimo dissidents including Paulo Gumane and Adelino Gwambe (former leaders of UDENAMO), were arrested and extrajudicially executed in Mozambique.[2] 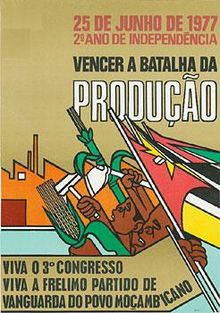 The new government was engaged in a civil war with an anti-Communist political faction known as RENAMO sponsored by the white minority governments of Rhodesia and South Africa. The Rome General Peace Accords that put an end to this civil war were not signed until 1992. In later years, reflecting its move towards social democratic views FRELIMO received active support from Margaret Thatcher's government in the UK and Mozambique became a member of the Commonwealth of Nations.

After Machel's death in 1986, in a suspicious airplane crash, Joaquim Chissano began to lead both the party and the state.

The end of Marxist ideology

Despite his inspiration in the Communist bloc countries, Chissano was not a hard-line Marxist and retreated from the traditional ideology with the collapse of the Soviet Union. After the Rome General Peace Accords that put an end to the Mozambican Civil War (1977–1992), the Mozambican ruling regime called for democratic, multi-party elections in 1994 that put an end to single-party rule. FRELIMO won the first elections with a large majority of the votes. In addition, the imperative of expunging all trace of socialist influence has compelled FRELIMO to rework official memories of the Mozambican War of Independence, a revision that has accelerated the slide of an already heavily mythologized official history.[3]

At the elections in late 1999, President Chissano was re-elected with 52.3% of the vote, and FRELIMO secured 133 of 250 parliamentary seats. Due to a mass of scams and several cases of corruption, Chissano's government has become the target of wide criticism.

The party thus selected Armando Guebuza as its candidate in the presidential election on December 1–2, 2004 where he won expectedly with about 60% of the vote. At the last legislative elections of the same date the party won 62.0 % of the popular vote and 160 out of 250 seats. RENAMO and some other opposition parties made claims of election fraud and denounced the result. These claims were supported by international observers (among others by the European Union Election Observation Mission to Mozambique and the Carter Center) to the elections who criticized the fact that the National Electoral Commission (CNE) did not conduct fair and transparent elections. They listed a whole range of shortcomings by the electoral authorities that benefited the ruling party FRELIMO. However, the elections shortcomings have probably not (also according to EU observers) affected the final result in the presidential election. The distribution of parliamentary seats among the parties will have been somewhat altered though, RENAMO probably losing some seats to FRELIMO. The Shangaan ethnic group is noted for its support for FRELIMO.

Bowen, Merle. The State Against the Peasantry: Rural Struggles in Colonial and Postcolonial Mozambique. University Press Of Virginia; Charlottesville, Virginia, 2000.