Lisgar Collegiate Institute, one of the country's best regarded public schools, is located in downtown Ottawa by the Rideau Canal and is only a few blocks from Canada's Parliament Hill. The school serves the neighbourhoods of Sandy Hill, New Edinburgh, Centretown, and Rockcliffe Park, and has many students transferring from other areas, attracted by the school's reputation and prestige. In previous years, parents and students have camped out overnight to secure a "coveted transfer spot" to Lisgar, causing some controversy in the news.[3] Lisgar is known for its gifted student program, and has been ranked number one for public schools in Ottawa and 12th in the province by the Fraser Institute in 2008.[2][4][5] Its Reach for the Top team won the Canadian national finals in the 2008 season.[6] Lisgar's Improv team is also well known for its continued excellence in the Canadian Improv Games, making it to the Canadian National tournament every year since 2004.[7] Lisgar is also home to the OCESS, a student-run Space Simulation program.[8] 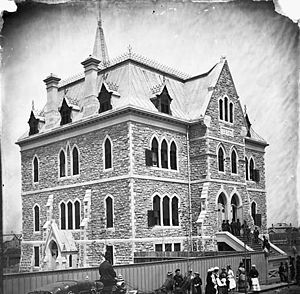 In 1843, a grammar school with 40 paying students was opened in the Sandy Hill area of Ottawa in a house at the corner of Waller Street and Daly Avenue. In 1859, the school became one of the first in Ontario to admit girls. The school changed locations several times in the first few years, and was renamed first Bytown Grammar School and later Ottawa Grammar School. In 1871 the school was raised to a high school and in 1873 to a collegiate institute, becoming Ottawa Collegiate Institute.

The school found a permanent home in 1873 when a lot at what was then the southern edge of the city was purchased. The school board acquired the land on Biddy Street for $3,200 and paid a squatter $100 to give up any claims on the land. Biddy Street was renamed Lisgar Street in 1880 after Lord Lisgar Canada's second Governor-General. A Gothic Revival style structure, designed by W.T. Thomas and W. Chesterton, was built at a cost of $26,000. Governor General Lord Dufferin laid the cornerstone and the school opened in 1874.

In 1892, the school became the first public secondary school in Ontario to hire a female teacher.[citation needed] Four new classrooms were added on the south side in 1892, but a fire in 1893 caused the school to be temporarily closed. In 1903, the east wing was built with eight new classrooms and a west wing with laboratories and an auditorium was added in 1908. A rifle range for the cadet corps, in the fourth-floor attic, was added in 1912, and a basement cafeteria in 1923. After the school was split in 1922 to form Glebe Collegiate Institute, OCI was renamed Ottawa Lisgar Street Collegiate Institute, which was soon shortened to Lisgar Collegiate Institute. Officially, the school remained OCI for several decades. Since the split, Glebe and Lisgar have been traditional rivals.[citation needed] 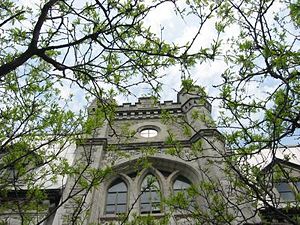 View of Lisgar from the Mall, the area between the North and South buildings

In 1951, a new gymnasium was built across the street with a tunnel connecting it to the main building. This building was enlarged in 1962. The old gym was turned into what is now the cafeteria. The two buildings are now referred to as the North and South buildings.

In 1957, Lisgar was the first school in Ontario to introduce a special program for gifted students.

In the 1970s, a cash-strapped Ottawa Board of Education decided to close the school and sell its valuable downtown real estate. This action was blocked by community members and alumni, and the school would be completely renovated instead.[citation needed]

In 1996, the third floor of the building was completely renovated and the science labs were modernized. In March 2003, parts of the first and second floors and the basement of the main building were damaged by a water main break that closed the school for a number of days. Some minor changes were made to the first floor in the reconstruction.

Lisgar has been the home of the Ottawa-Carleton Educational Space Simulation since 1990. The school is the only one in the region and one of the few in Canada to run such a program. Lisgar was also one of the original members of the now-defunct International Student Space Simulation.

It is rumoured that Lisgar has two ghosts, which is why the top floor is closed off.[citation needed] One girl was killed in the 1940s by a fall of ice from the roof, and a janitor died when he fell off the roof in an unrelated incident.[citation needed] Now Lisgar is a part of the Haunted Walk, a "ghost tour" of downtown Ottawa. The top floor of the North Building was originally closed due to changes to the fire code that prevented its use (there exists only one exit point), and is now unusable because the ceilings of the fourth floor were raised into it.[citation needed]

For a complete list of Lisgar's qualities and test results and other information visit the OCDSB's school profile.

In 2006 parents camped in the Lisgar sports field to enroll a limited number of students from outside Lisgar's catchment in the school.

Lisgar has a wide variety of clubs available to students. The school's best-known clubs throughout the city are Amnesty International [AI] Lisgar's Environmental Action Force (LEAF), Ottawa-Carleton Educational Space Simulation (Space Sim), and Kiwanis Educating Youth (KEY). Lisgar's Student Council consists of nine committees that oversee events throughout the school year, some of which include the well-known Annual United Way Pancake Breakfast and the Canned Food Drive for the Ottawa Centretown Food Bank.

In 2006, the school's Reach for the Top team became the first Canadian team to participate in the NAQT High School National Championships, placing 25th. In 2008, the Lisgar Reach team became the first team to qualify for both the Canadian Reach for the Top finals and the NAQT High School National Championships in Chicago, placing second in Ontario for Reach and first in their qualifying division (Ottawa) for NAQT. Electing to attend the Reach Nationals in Edmonton, Lisgar came from behind to beat two-time champion University of Toronto Schools 420-415 for the national title. In 2010, Lisgar was able to qualify two teams for the NAQT Chicago tournament.

Lisgar's Improv Team, affectionately known as 'Jimmy', has a reputation for being of the highest calibre. Regular attendees of the National Festival of the Canadian Improv Games, Jimmy has been a pillar of the Ottawa Improv community for years.[9]