Heat death of the universe

The heat death of the universe is a suggested ultimate fate of the universe, in which the universe has diminished to a state of no thermodynamic free energy and therefore can no longer sustain motion or life. Heat death does not imply any particular absolute temperature; it only requires that temperature differences or other process may no longer be exploited to perform work. In the language of physics, the universe has reached maximum entropy. The hypothesis of heat death stems from the 1850s ideas of William Thomson, 1st Baron Kelvin, who extrapolated the views of the theory of heat as mechanical energy loss in nature as embodied in the first two laws of thermodynamics to processes in the universe.

Origins of the idea

The idea of heat death stems from the second law of thermodynamics, which states that entropy tends to increase in an isolated system. If the universe lasts for a sufficient time, it will asymptotically approach a state where all energy is evenly distributed. In other words, in nature there is a tendency to the dissipation (energy loss) of mechanical energy (motion); hence, by extrapolation, there exists the view that the mechanical movement of the universe will run down, as work is converted to heat, in time due to the second law. The idea of heat death was first proposed in loose terms beginning in 1851 by William Thomson, 1st Baron Kelvin, who theorized further on the mechanical energy loss views of Sadi Carnot (1824), James Joule (1843), and Rudolf Clausius (1850). Thomson’s views were then elaborated on more definitively over the next decade by Hermann von Helmholtz and William Rankine.

The idea of heat death of the universe derives from discussion of the application of the first two laws of thermodynamics to universal processes. Specifically, in 1851 William Thomson outlined the view, as based on recent experiments on the dynamical theory of heat, that "heat is not a substance, but a dynamical form of mechanical effect, we perceive that there must be an equivalence between mechanical work and heat, as between cause and effect." [1] 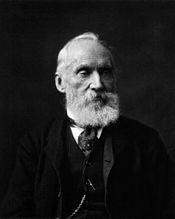 In 1852, Thomson published his "On a Universal Tendency in Nature to the Dissipation of Mechanical Energy" in which he outlined the rudiments of the second law of thermodynamics summarized by the view that mechanical motion and the energy used to create that motion will tend to dissipate or run down, naturally.[2] The ideas in this paper, in relation to their application to the age of the sun and the dynamics of the universal operation, attracted the likes of William Rankine and Hermann von Helmholtz. The three of them were said to have exchanged ideas on this subject.[3] In 1862, Thomson published "On the age of the sun’s heat", an article in which he reiterated his fundamental beliefs in the indestructibility of energy (the first law) and the universal dissipation of energy (the second law), leading to diffusion of heat, cessation of useful motion (work), and exhaustion of potential energy through the material universe while clarifying his view of the consequences for the universe as a whole. In a key paragraph, Thomson wrote:

The result would inevitably be a state of universal rest and death, if the universe were finite and left to obey existing laws. But it is impossible to conceive a limit to the extent of matter in the universe; and therefore science points rather to an endless progress, through an endless space, of action involving the transformation of potential energy into palpable motion and hence into heat, than to a single finite mechanism, running down like a clock, and stopping for ever.[4]

In the years to follow both Thomson’s 1852 and the 1865 papers, Helmholtz and Rankine both credited Thomson with the idea, but read further into his papers by publishing views stating that Thomson argued that the universe will end in a "heat death" (Helmholtz) which will be the "end of all physical phenomena" (Rankine).[3][5]

Inflationary cosmology suggests that in the early universe, before cosmic inflation, energy was uniformly distributed,[6] and the universe was thus in a state superficially similar to heat death. However, these two states are actually very different: in the early universe, gravity was a very important force, and in a gravitational system, if energy is uniformly distributed, entropy is quite low, compared to a state in which most matter has collapsed into black holes. Thus, such a state is not in thermodynamic equilibrium, as it is thermodynamically unstable.[7][8] However, in the heat death scenario, the energy density is so low that the system can be thought of as non-gravitational, such that a state in which energy is uniformly distributed is a thermal equilibrium state, i.e., the state of maximal entropy.

The final state of the universe depends on the assumptions made about its ultimate fate, and these assumptions have varied considerably over the late 20th century and early 21st century. In a "closed" universe that undergoes recollapse, a heat death is expected to occur, with the universe approaching arbitrarily high temperature and maximal entropy as the end of the collapse approaches.[citation needed] In an "open" or "flat" universe that continues expanding indefinitely, a heat death is also expected to occur[citation needed], with the universe cooling to approach absolute zero temperature and approaching a state of maximal entropy over a very long time period. There is dispute over whether or not an expanding universe can approach maximal entropy; it has been proposed that in an expanding universe, the value of maximum entropy increases faster than the universe gains entropy, causing the universe to move progressively further away from heat death.[citation needed] (See Ludwig Boltzmann#The Second Law as a law of disorder)

There is also some uncertainty remaining on the exact value of the current entropy of the universe. A recent analysis of entropy suggests that the visible universe has more entropy than previously thought. This is because the research concludes that supermassive black holes are the largest contributor.[9]

From the Big Bang through the present day and well into the future, matter and dark matter in the universe are thought to be concentrated in stars, galaxies, and galaxy clusters. Therefore, the universe is not in thermodynamic equilibrium and objects can do physical work.[10], §VID. The decay time for a supermassive black hole of roughly 1 galaxy-mass (1011 solar masses) due to Hawking radiation is in the order of 10100 years,[11] so entropy can be produced until at least that time. After that time, the universe enters the so-called dark era, and is expected to consist chiefly of a dilute gas of photons and leptons.[10], §VIA. With only very diffuse matter remaining, activity in the universe will have tailed off dramatically, with extremely low energy levels and extremely long time scales. Speculatively, it is possible that the universe may enter a second inflationary epoch, or, assuming that the current vacuum state is a false vacuum, the vacuum may decay into a lower-energy state.[10], §VE. It is also possible that entropy production will cease and the universe will achieve heat death.[10], §VID.