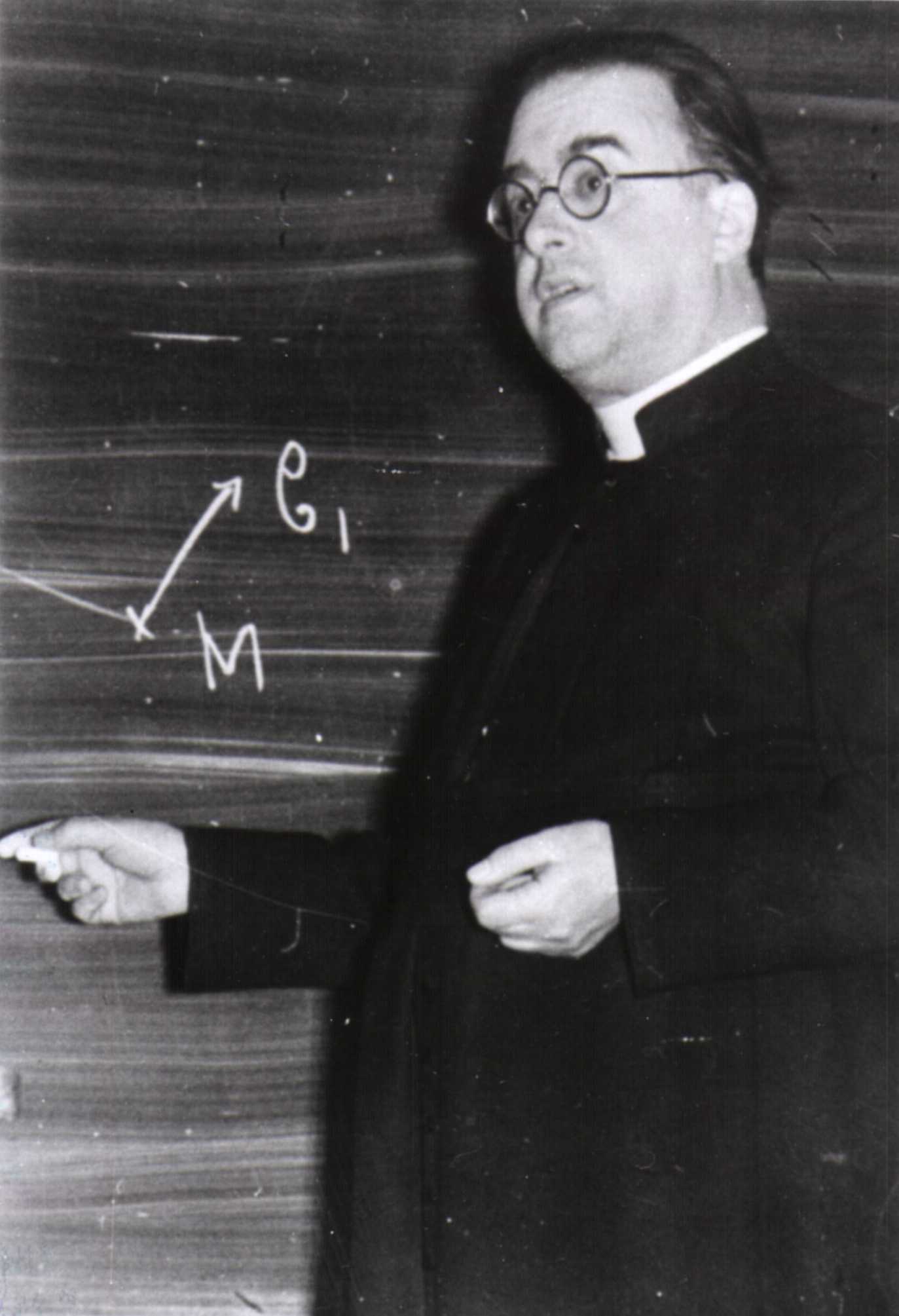 Georges Henri Joseph Édouard Lemaître (, &ndash; , ) was a Belgian , honorary prelate, professor of physics and astronomer at the . He sometimes used the title "" or "".

Lemaître proposed what became known as the theory of the origin of the , which he called his 'hypothesis of the primeval atom'. [ [http://www.catholiceducation.org/articles/science/sc0022.html 'A Day Without Yesterday': Georges Lemaitre & the Big Bang ] ] [ [http://www.pbs.org/wgbh/aso/databank/entries/dp27bi.html A Science Odyssey: People and Discoveries: Big bang theory is introduced ] ] [ [http://www.chemsoc.org/timeline/pages/1927.html Lemaître - Big Bang ] ]

Lemaitre was a pioneer in applying 's theory of to . He suggested a precursor of in 1927. In 1931, he published his primeval atom theory in "Nature". At the time, Einstein believed in a and had expressed skepticism about Lemaître's 1927 paper. A similar solution to Einstein's equations, implying a changing radius of the universe, had been proposed in 1922 by , as Einstein told Lemaître when he approached him with the theory at the 1927 . (Einstein had also criticized Friedman's theory.) But it is Lemaître's theory that changed the course of science, for the following reasons:
* Friedman was a mathematician who neither worked with astronomical data nor cared whether his theory was a description of physical reality.
* Friedman died in 1925, soon after first proposing his theory.
* Lemaître worked with astronomers and designed his theory to have testable implications, and to be in accord with observations of the time.
* made sure that Lemaître got a hearing in the scientific community.

Lemaître proposed his theory at an opportune time, since would soon publish his velocity-distance relation that strongly supported an expanding universe and, consequently, the Big Bang theory. In fact, Lemaître's 1927 paper derived what became known as , two years before Hubble did so. Because Lemaître spent his entire career in Europe, his contributions are not as well known in the (USA) as those of Hubble or Einstein, men well known in the USA by virtue of residing there.

Both Friedman and Lemaître concluded that the universe must be expanding. Lemaître further concluded that an initial "creation-like" event must have occurred. This is the as we know it today, and why he is credited with its discovery.

Einstein at first dismissed Friedman and then (privately) Lemaître out of hand, saying that not all mathematics leads to correct theories. After Hubble's discovery was published, Einstein quickly and publicly endorsed Lemaître's theory, helping both the theory and its proposer get fast recognition. [According to in his book "Big Bang".]

In 1933, Lemaître found an important inhomogeneous solution of describing a spherical dust cloud, the .

After a classical education at a Jesuit secondary school (Collège du Sacré-Coeur, ), Lemaître began studying at the at the age of 17. In 1914, he interrupted his studies to serve as an artillery officer in the Belgian army for the duration of . At the end of hostilities, he received the with palms.

After the war, he studied and , and began to prepare for hood. He obtained his doctorate in 1920 with a thesis entitled "l'Approximation des fonctions de plusieurs variables réelles" ("Approximation of functions of several real variables"), written under the direction of . He was ordained a priest in 1923.

In 1923, he became a graduate student in astronomy at the , spending a year at St Edmund's House (now ). He worked with who initiated him into modern , stellar astronomy, and . He spent the following year at in with , who had just gained a name for his work on e, and at the , where he registered for the doctorate in sciences.

At this time, Einstein, while not taking exception to the mathematics of Lemaître's theory, refused to accept the idea of an expanding universe; Lemaître recalled him commenting " _fr. Vos calculs sont corrects, mais votre physique est abominable" [cite conference | author = Deprit, A. | year = 1984 | title = Monsignor Georges Lemaître | booktitle = The Big Bang and Georges Lemaître | editor = A. Barger (ed) |publisher = Reidel | pages = 370 ] ("Your math is correct, but your physics is abominable.") The same year, Lemaître returned to MIT to present his doctoral thesis on "The gravitational field in a fluid sphere of uniform invariant density according to the theory of relativity". Upon obtaining the PhD, he was named ordinary Professor at the Catholic University of Leuven.

In 1930, Eddington published in the "" a long commentary on Lemaître's 1927 article, in which he described the latter as a "brilliant solution" to the outstanding problems of cosmology. [Eddington, A. S., " [http://adsabs.harvard.edu/abs/1930MNRAS..90..668E On the instability of Einstein's spherical world] ", "Monthly Notices of the Royal Astronomical Society", Vol. 90, p.668-688, 05/1930] The original paper was published in an abbreviated English translation in 1931, along with a sequel by Lemaître responding to Eddington's comments. [Lemaître, G., " [http://adsabs.harvard.edu/abs/1931MNRAS..91..490L Expansion of the universe, The expanding universe] ", "Monthly Notices of the Royal Astronomical Society", Vol. 91, p.490-501, 03/1931] Lemaître was then invited to in order to take part in a meeting of the British Association on the relation between the physical Universe and spirituality. There he proposed that the Universe expanded from an initial point, which he called the "Primeval Atom" and developed in a report published in " Nature" [G. Lemaître, "The Beginning of the World from the Point of View of Quantum Theory", Nature” 127 (1931), n. 3210, pp. 706] . Lemaître himself also described his theory as "the Cosmic Egg exploding at the moment of the creation"; it became better known as the "Big Bang theory," the term having originally been a sarcastic remark of 's.

This proposal met from his fellow scientists at the time. Eddington found Lemaître's notion unpleasant. Einstein found it suspect because too strongly reminiscent of the of creation. Moreover, he deemed it unjustifiable from a physical point of view. On the other hand, Einstein encouraged Lemaître to look into the possibility of models of non-isotropic expansion, so it's clear he was not altogether dismissive of the concept. He also appreciated Lemaître's argument that a static-Einstein model of the universe could not be sustained indefinitely into the past.

In January 1933, Lemaître and Einstein, who had met on several occasions - in 1927 in , at the time of a , in 1932 in Belgium, at the time of a cycle of conferences in Brussels and lastly in 1935 at Princeton - traveled together to California for a series of seminars. After the Belgian detailed his theory, Einstein stood up, applauded, and is supposed to have said, "This is the most beautiful and satisfactory explanation of creation to which I have ever listened." However there is disagreement over the reporting of this quote in the newspapers of the time, and it may be that Einstein was not actually referring to the theory as a whole but to Lemaître's proposal that s may in fact be the left over artifacts of the initial "explosion." Later research on cosmic rays by would undercut this proposal, however.

In 1933, when he resumed his theory of the expanding Universe and published a more detailed version in the "Annals of the Scientific Society of Brussels", Lemaître would achieve his greatest glory. Newspapers around the world called him a famous Belgian scientist and described him as the leader of the new cosmological physics.

On , , Lemaître received the , the highest Belgian scientific distinction, from King Léopold III. His proposers were Albert Einstein, Charles de la Vallée-Poussin and . The members of the international jury were Eddington, Langevin and . Another distinction that the Belgian government reserves for exceptional scientists was allotted to him in 1950: the decennial prize for applied sciences for the period 1933-1942.

In 1936, he was elected member of the .He took an active role there, became the president in March 1960 and remaining so until his death. At the outset of the , he was bemused to find himself appointed by the to sit on a commission investigating the subject of . However, as he could not travel to Rome because of his health (he had suffered a heart attack in December 1964), he demurred, expressing his surprise that he was even chosen, at the time telling a Dominican colleague, P. , that he thought it was dangerous for a mathematician to venture outside of his specialty. [Lambert, Dominique, 2000. "Un Atome d'Univers". Lessius, p. 302.] He was also named ("") in 1960 by .

In 1946, he published his book on "L'Hypothèse de l'Atome Primitif" ("The Primeval Atom Hypothesis"). It would be translated into Spanish in the same year and into English in 1950.

During the 1950s, he gradually gave up part of his teaching workload, ending it completely with his in 1964.

At the end of his life, he was devoted more and more to numerical calculation. He was in fact a remarkable algebraicist and arithmetical calculator. Since 1930, he used the most powerful calculating machines of the time like the Mercedes. In 1958, he introduced at the University a Burroughs E 101, the University's first electronic computer. Lemaître kept a strong interest in the development of computers and, even more, in the problems of and . This interest grew with age until it absorbed him almost completely.

He died on , shortly after having learned of the discovery of , which provided further evidence for his intuitions about the birth of the Universe.

*The Lemaître crater, a lunar impact crater
*The Friedmann-Lemaître-Robertson-Walker metric