Doctors' Trial
Not to be confused with Doctors' plot. 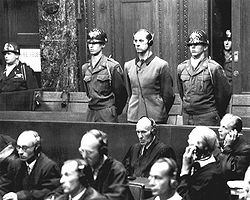 A sentence of death by hanging is pronounced by a U.S. War Crimes Tribunal upon Adolf Hitler's personal physician, 43-year old Karl Brandt. Brandt was also Reich Commissar for Health and Sanitation.

The Doctors' Trial (officially United States of America v. Karl Brandt, et al.) was the first of 12 trials for war crimes that the United States authorities held in their occupation zone in Nuremberg, Germany after the end of World War II. These trials were held before U.S. military courts, not before the International Military Tribunal, but took place in the same rooms at the Palace of Justice. The trials are collectively known as the "Subsequent Nuremberg Trials", formally the "Trials of War Criminals before the Nuremberg Military Tribunals" (NMT).

Twenty of the 23 defendants were medical doctors (Brack, Rudolf Brandt, and Sievers being Nazi officials instead) and were accused of having been involved in Nazi human experimentation and mass murder under the guise of euthanasia. Josef Mengele, one of the leading Nazi doctors, had evaded capture.

The judges in this case, heard before Military Tribunal I, were Walter B. Beals (presiding judge) from Washington, Harold L. Sebring from Florida, and Johnson T. Crawford from Oklahoma, with Victor C. Swearingen, a former special assistant to the Attorney General of the United States, as an alternate judge. The Chief of Counsel for the Prosecution was Telford Taylor and the chief prosecutor James M. McHaney. The indictment was filed on October 25, 1946; the trial lasted from December 9 that year until August 20, 1947. Of the 23 defendants, seven were acquitted and seven received death sentences; the remainder received prison sentences ranging from 10 years to life imprisonment.

The accused faced 4,000 charges, including:

The tribunal largely dropped count 1, stating that the charge was beyond its jurisdiction.

Those sentenced to death were hanged on June 2, 1948 in Landsberg prison, Bavaria.

For some, the difference between receiving a prison term and the death sentence was membership of "an organization declared criminal by the judgement of the International Military Tribunal", the SS. However, some SS medical personnel received prison sentences. The degree of personal involvement and/or presiding over groups involved was a factor in others.