Aggregate demand
This article is about a concept in macroeconomics. For microeconomic demand aggregated over consumers, see Demand curve.

In macroeconomics, aggregate demand (AD) is the total demand for final goods and services in the economy (Y) at a given time and price level.[1] It is the amount of goods and services in the economy that will be purchased at all possible price levels.[2] This is the demand for the gross domestic product of a country when inventory levels are static. It is often called effective demand, though at other times this term is distinguished.

It is often cited that the aggregate demand curve is downward sloping because at lower price levels a greater quantity is demanded. While this is correct at the microeconomic, single good level, at the aggregate level this is incorrect. The aggregate demand curve is in fact downward sloping as a result of three distinct effects; Pigou's wealth effect, the Keynes' interest rate effect and the Mundell-Fleming exchange-rate effect.

These four major parts, which can be stated in either 'nominal' or 'real' terms, are:

Understanding of the aggregate demand curve depends on whether it is examined based on changes in demand as income changes, or as price change.

Sometimes, especially in textbooks, "aggregate demand" refers to an entire demand curve that looks like that in a typical Marshallian supply and demand diagram. 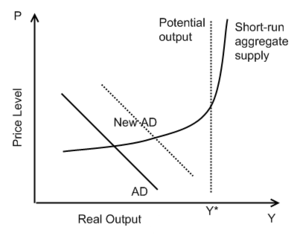 Thus, that we could refer to an "aggregate quantity demanded" (Yd = C + Ip + G + NX in real or inflation-corrected terms) at any given aggregate average price level (such as the GDP deflator), P.

In these diagrams, typically the Yd rises as the average price level (P) falls, as with the AD line in the diagram. The main theoretical reason for this is that if the nominal money supply (Ms) is constant, a falling P implies that the real money supply (Ms/P)rises, encouraging lower interest rates and higher spending. This is often called the "Keynes effect."

Carefully using ideas from the theory of supply and demand, aggregate supply can help determine the extent to which increases in aggregate demand lead to increases in real output or instead to increases in prices (inflation). In the diagram, an increase in any of the components of AD (at any given P) shifts the AD curve to the right. This increases both the level of real production (Y) and the average price level (P).

But different levels of economic activity imply different mixtures of output and price increases. As shown, with very low levels of real gross domestic product and thus large amounts of unemployed resources, most economists of the Keynesian school suggest that most of the change would be in the form of output and employment increases. As the economy gets close to potential output (Y*), we would see more and more price increases rather than output increases as AD increases.

Beyond Y*, this gets more intense, so that price increases dominate. Worse, output levels greater than Y* cannot be sustained for long. The AS is a short-term relationship here. If the economy persists in operating above potential, the AS curve will shift to the left, making the increases in real output transitory.

At low levels of Y, the world is more complicated. First, most modern industrial economies experience few if any falls in prices. So the AS curve is unlikely to shift down or to the right. Second, when they do suffer price cuts (as in Japan), it can lead to disastrous deflation.

In Marxian economics, the equation of aggregate demand with expenditure on GDP or GNP is rejected as false, on conceptual and statistical grounds.

First, GDP as a measure of value added excludes purchases of all intermediate goods and services used up in production. Even so, gross value added cannot be simply equated with final demand, insofar as it excludes transfers, property income and most trade in second-hand items.

Second, Gross Output from which GDP is derived by deducting intermediate expenditures, encompasses only those flows of income or expenditure regarded as related to production. Property income in the form of certain types of interest, transfers, land rents and realised capital gains from asset sales are excluded from gross output and GDP. Therefore, if the amount of property income (or transfers) increases, although GDP remains constant, national income receipts can nevertheless increase, and consequently aggregate demand can also increase.

Fourth, GDP in principle excludes sales of second-hand assets except for those modified by some prior productive activity (e.g. reconditioned cars).

Finally, expenditure on GDP obviously disregards the creation of credit money by banks and governments, which boosts aggregate demand.

Thus, it is argued, the catch-all Keynesian notion of aggregate demand:

This perspective originates in, and is intimately tied to, the debt-deflation theory of Irving Fisher, and the notion of a credit bubble (credit being the flip side of debt), and has been elaborated in the Post-Keynesian school.[4] If the overall level of debt is rising each year, then aggregate demand exceeds Income by that amount. However, if the level of debt stops rising and instead starts falling (if "the bubble bursts"), then aggregate demand falls short of income, by the amount of net savings (largely in the form of debt repayment or debt writing off, such as in bankruptcy). This causes a sudden and sustained drop in aggregate demand, and this shock is argued to be the proximate cause of a class of economic crises, properly financial crises. Indeed, a fall in the level of debt is not necessary – even a slowing in the rate of debt growth causes a drop in aggregate demand (relative to the higher borrowing year).[6] These crises then end when credit starts growing again, either because most or all debts have been repaid or written off, or for other reasons as below.

From the perspective of debt, the Keynesian prescription of government deficit spending in the face of an economic crisis consists of the government net dis-saving (increasing its debt) to compensate for the shortfall in private debt: it replaces private debt with public debt. Other alternatives include seeking to restart the growth of private debt ("reflate the bubble"), or slow or stop its fall; and debt relief, which by lowering or eliminating debt stops credit from contracting (as it cannot fall below zero) and allows debt to either stabilize or grow – this has the further effect of redistributing wealth from creditors (who write off debts) to debtors (whose debts are relieved).