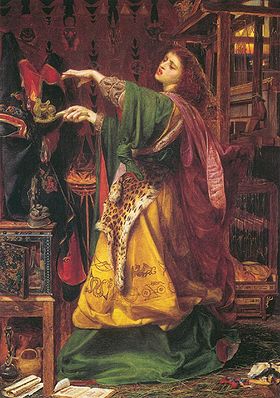 Morgan le Fay /ˈmɔrɡən lə ˈfeɪ/, alternatively known as Morgane, Morgaine, Morgana and other variants, is a powerful sorceress in the Arthurian legend. Early works featuring Morgan do not elaborate her character beyond her role as a fay or magician. She became much more prominent in the later cyclical prose works such as the Lancelot-Grail and the Post-Vulgate Cycle, in which she becomes an antagonist to King Arthur and Queen Guinevere. She is said to be the daughter of Arthur's mother, the Lady Igraine, and her first husband, Gorlois, Duke of Cornwall, so that Arthur (son of Igraine and Uther Pendragon) is her half brother.

The early accounts of Geoffrey of Monmouth and Gerald of Wales refer to Morgan in conjunction with the Isle of Apples (later Avalon) to which the fatally-wounded Arthur was carried. To the former she was an enchantress, one of nine sisters, while to the latter she was the ruler and patroness of an area near Glastonbury and a close blood-relation of King Arthur. In the early romances of Chrétien de Troyes, also, she figures as a healer.

Though in later stories she becomes an adversary of the Round Table when Guinevere discovers her adultery with one of her husband's knights, she eventually reconciles with her brother, and even retains her original role, serving as one of the four enchantresses who carry the king to Avalon after his final battle at Camlann. She has at least two elder sisters, Elaine and Morgause, the latter of whom is the mother of Gawain and foster mother of the traitor Mordred; Morgan le Fay and Arthur's' illegitimate son . In Sir Thomas Malory's Le Morte d'Arthur and elsewhere, she is married, unhappily, to King Urien of Gore and Ywain is her son.

As her epithet "le Fay" (from the French la fée, meaning fairy) indicates, the figure of Morgan appears to have been originally a supernatural being. While later works make her specifically human, she retains her magical powers.[1]

Inspiration for her character came from earlier Welsh mythology and literature; she has often been compared with the goddess Modron, a figure derived from the continental Dea Matrona and featured with some frequency in medieval Welsh literature. Modron appears in Welsh Triad 70, in which her children by Urien, Owain and Morfydd, are called the "Three Blessed Womb-Burdens of the Island of Britain,"[2] and a later folktale preserved in Peniarth MS 147 records the story behind these conceptions more fully.[3]

Urien is Morgan le Fay's husband in the continental romances, while Owain mab Urien is the historical figure behind their son Ywain. Additionally, Modron is called "daughter of Avallach," a Welsh ancestor deity whose name can also be interpreted as a noun meaning "a place of apples".[4] In fact, in the story of Owain and Morvydd's conception in Peniarth 147, Modron is called the "daughter of the king of Avallach." This is similar to Avalon, the "Isle of Apples" with which Morgan le Fay has been associated since her earliest appearances. Additional speculation sometimes connects Morgan with the Irish goddess Morrígan, though there are few similarities between the two beyond the spelling of their names.

Morgan first appears by name in Geoffrey of Monmouth's Vita Merlini, written about 1150. Purportedly an account of the wizard Merlin's later adventures, it elaborates some episodes from Geoffrey's more famous earlier work, Historia Regum Britanniae. In the Historia, Geoffrey explains that after Arthur is seriously wounded at the Battle of Camlann, he is taken off to Avalon, the Isle of Apples, to be healed. In the Vita Merlini he describes this island in more detail and names "Morgen" as the chief of nine magical sisters who dwell there. Morgan retains this role as Arthur's otherworldly healer in much later literature.

Before the cyclical Old French romances, appearances of Morgan are few. Chrétien de Troyes mentions her in his first romance Erec and Enide, completed around 1170; he says one guest at the titular characters' wedding, a certain Guigomar, lord of the Isle of Avalon, is a friend of Morgan. She is later mentioned in the same poem when Arthur provides a wounded Erec with a healing balm made by his sister Morgan; this episode both affirms her early role as a healer and provides the first mention of Morgan as Arthur's sister. Chrétien again refers to Morgan as a great healer in his later romance Yvain, the Knight of the Lion, in an episode in which two ladies restore the maddened hero to his senses with a concoction provided by Morgan. However, while Modron is the mother of Owain in Welsh literature, and Morgan would be assigned this role in later French literature, this first continental association between Ywain and Morgan does not imply they are son and mother. The Arthurian tale, Geraint son of Erbin, based on Chretien de Troyes's Erec, mentions King Arthur's "chief physician", Morgan Tud; it is believed that this character, though considered a male in Gereint, may be derived from Morgan le Fay (though this has been a matter of debate among Arthurian scholars since the 19th century. The epithet Tud may be a Welsh or Breton cognate or borrowing of Old Irish tuath, "north, left, sinister, wicked", also "fairy, elf").[5][6]

Morgan's role is greatly expanded in the 13th-century Lancelot-Grail (Vulgate Cycle) and the subsequent works inspired by it. The youngest of Gorlois and Igraine's daughters, she is sent to a convent when Uther Pendragon kills her father and marries her mother. There she begins her study of magic, but is interrupted when Uther betroths her to his ally Urien. Unhappy with her husband, she takes a string of lovers until she is caught by a young Guinevere, who expels her from court in disgust. Morgan continues her magical studies under Merlin, all the while plotting against Guinevere. In subsequent chapters she uses her skills to foil Arthur's knights, especially Lancelot, whom she alternately tries to seduce and to expose as Guinevere's adulterous lover. In the Prose Tristan, she delivers to Arthur's court a magic drinking horn from which no unfaithful lady can drink without spilling, hoping to reveal the infidelity.

Thomas Malory mostly follows the portrayal of Morgan in the Vulgate and Post-Vulgate Cycles in his book Le Morte d'Arthur, though he expands her role in some cases. Through magic and mortal means, she tries to arrange Arthur's downfall, most famously when she arranges for her lover Accolon to obtain the sword Excalibur and use it against Arthur in single combat. Failing in this, Morgan throws Excalibur's protective scabbard into a lake. The Fay turns up throughout the High and Late Middle Ages, generally in works related to the cycles of Arthur or Charlemagne. At the end of Sir Gawain and the Green Knight, it is revealed that the entire supernatural episode has been instigated by Morgan as a test for Arthur and his knights, and to frighten Guinevere. Morgan's importance to this particular narrative has been disputed and called a deus ex machina [7] and simply an artistic device to further connect Gawain's episode to the Arthurian story.

In the legends of Charlemagne she is most famous for her association with Ogier the Dane, whom she takes to her mystical island palace to be her lover. In the chanson de geste of Huon de Bordeaux, Morgan is the mother of the fairy king Oberon by none other than Julius Caesar.

The stereotypical image of Morgan is often that of a villainess: a seductive, megalomaniacal sorceress who wishes to overthrow Arthur. Contemporary interpretations of the Arthurian myth (notably the film Excalibur) sometimes assign to Morgan the role of seducing Arthur and giving birth to the wicked Mordred, though traditionally Mordred's mother was Morgause, another sister. In these works Mordred is often her pawn, used to bring about the end of the Arthurian age. In Mark Twain's A Connecticut Yankee in King Arthur's Court Morgan le Fay is an archetypical corrupt and cruel feudal aristocrat, keeping prisoners for decades in her dungeon.

Starting in the later 20th century, however, some feminists adopted Morgan as a representation of female power or of a fading form of feminine spirituality supposedly practised by the Celts or earlier peoples.[8] These interpretations draw upon the French romances which portray Morgan as a "benevolent figure" with extraordinary healing powers.[8] This has led to Morgan's expanded role in feminist Arthurian literature such as Marion Zimmer Bradley's The Mists of Avalon (where she is called Morgaine), which goes so far as to give her credit for the major events of the traditional story.[9] The character appears in the BBC television series Merlin with the name Morgana Pendragon, where she is Uther's ward, and is later revealed to be his illegitimate daughter, and Arthur's half sister. But when she realizes she has magic and angered by Uther's actions against people, as of the third series she turned to darkness. In the TV mini-series The Mists of Avalon as Morgaine. Morgan Le Fay was also depicted as one of the Ascenced Ancients on the TV series "Stargate SG-1", where she aided the main characters in their quest for the holy grail.

Mary Knickle's opera Morgan le Fay follows this 20th century tradition in portraying Morgan as representing female power on an isle threatened by fearful male Christian fanatics exploiting Mordred's unconcern with women's welfare. She is also hostile to Uther as the murderer of Gorlois, and to her own mother. She has an uneven relationship with her sister Elaine, who (coerced by the clerics) convinces her to return to Britain. Merlin appears as her lover, but she refuses him to save Avalon by withdrawing it from the world. Much of the libretto is drawn from Celtic druidic chants, the Old Testament and modern spiritual eco-feminism conceptions of power drawn from contemplation, calm and enjoying nature.

"The Fata Morgana, As Observed In The Harbour Of Messina"

Morgan le Fay, or Fata Morgana in Italian, has been associated with Sicily since the Norman conquest of southern Italy.[10] As such she gave her name to the form of mirage common off the shores of Sicily, the Fata Morgana.[10] The medieval romance Floriant et Florete places Morgan's mountain home of Montegibel on Sicily, and later Italian folklore describes Morgan as living in Mount Etna.[11]