pronunciation (help·info); Hungarian: Poprád, German: Deutschendorf) is a city in northern Slovakia at the foot of the High Tatra Mountains famous for its picturesque historic centre and as a holiday resort. It is the biggest town of the Spiš region and the tenth largest city in Slovakia with a population of approximately 55,000.

The Poprad-Tatry Airport is an international airport located just outside the city. Poprad is also the starting point of the Tatra Electric Railway (known in Slovak as Tatranská elektrická železnica), a set of special narrow-gauge trains (trams) connecting the resorts in the High Tatras with each other and with Poprad. Main line trains link Poprad to other destinations in Slovakia and beyond; in particular, there are through trains running from Poprad to Prague in the Czech Republic.

Poprad itself, the first written reference to which dates from 1256, was for 690 years (up until 1946) just one of several neighbouring settlements, which currently make up the modern city. The other parts of the current municipality are Matejovce (first reference 1251), Spišská Sobota (1256), Veľká (1268), and Stráže pod Tatrami (1276). The most significant of these original towns was Georgenberg (or Szepesszombat, now: Spišská Sobota), which preserved its dominant position in the area until the late 19th century.

Poprad is situated on the Poprad River in the Sub-Tatra Basin, and is a gateway to the High Tatras. Mountain ranges around the city include the Levoča Hills in the east, Kozie chrbty in the south, and the Low Tatras in the southwest. The drainage divide between the Black Sea and Baltic Sea lies a bit to the west, near the village of Štrba.

Poprad lies in the north temperate zone and has a humid continental climate (Köppen Dfb) with four distinct seasons. It is characterized by a significant variation between warm summers and cold winters. 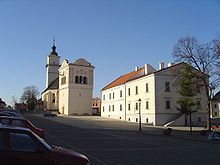 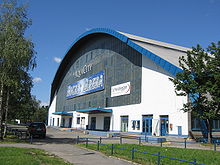 The historical centre is concentrated around the St. Egidius square (Námestie svätého Egídia), which is rimmed with houses predominantly from the 18th and 19th centuries. Churches in the city include the early-Gothic Catholic Church of St. Egidius from the late 13th century.

Another historical centre near Poprad is in Spišská Sobota, which was declared in 1953 to be a Town Monument Reserve. A significant landmark there is the Church of St. George, with five late-Gothic side altars and a main altar from the workshop of Master Paul of Levoča.

Since 2003, the mayor is Anton Danko (former international ice-hockey referee).

The city is divided into six boroughs for the purpose of municipal administrative division:

Poprad has hockey clubs HK ŠKP Poprad and HC LEV Poprad, the latter competing in the KHL since 2011. There is a number of former and current hockey players in NHL who were born Poprad[citation needed].

The city's system of primary education consists of 12 public schools, and one religious primary school, enrolling in total 5,464 pupils.[3] Secondary education is represented by four gymnasia with 1,800 students,[4] three specialized high schools with 1,566 students,[5] and four vocational schools with 2,045 students (data as of 2007).[6]

Poprad is a gateway of the High Tatra mountain range, which is a popular tourist destination. The city lies on the main road (E 50) and railway connecting western and eastern Slovakia.

Poprad-Tatry railway station links Poprad with other major destinations on Slovakia's standard gauge rail network, and with the mountains via the metre gauge Tatra Electric Railway.