Brewing is big business in Colorado. According to The Beer Institute, the state ranked number one in terms of gross beer production, producing over 23,370,848 barrels in 2006.[1] It is also ranked fourth in the country in number of brewpubs and craft breweries according to The Brewers Associaion.[2] Denver ranks first in the nation in beer production per capita and second in the number of breweries.[3] Colorado is home to 4 of the top-50 brewing companies in the nation. There are 118 breweries statewide.[4] 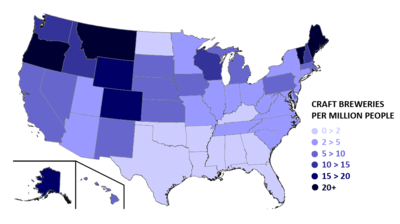 The following is a (partial) list of Colorado-based breweries

There are also many breweries and brewpubs that have gone out of business. Some recent examples include:

In Dumb and Dumber, Lloyd refers to Aspen, Colorado as "a place where the beer flows like wine". Denver, Colorado, has been nicknamed "the Napa valley of beer," only it's unclear how this nickname came to be. Referenced by the Denver Business Journal[6], it's rumored this nickname was created by the Sheraton Hotel chain as part of their "Chief Beer Officer" promotion in 2008[7]. However, it seems to have stuck.

According to legend, Denver's first permanent structure was a saloon[8]. While there is evidence of a saloon and brothel at 2009 Market Street[9] of historical significance, it seems likely that the true location of the first permanent structure is forever unknown. According to The City and The Saloon, Denver 1858-1916[10], there were numerous saloons in the Denver area during the city's early days.