The Cornwall Railway was a 7 ft 0 1⁄4 in (2,140 mm) broad gauge railway from Plymouth in Devon to Falmouth in Cornwall, United Kingdom. The section from Plymouth to Truro opened in 1859, the extension to Falmouth in 1863. The original section remains open as part of the London to Penzance main line, the Truro to Falmouth line being operated as a branch.[1] 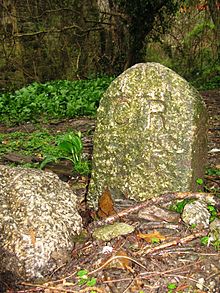 The first proposal for a railway to Falmouth came from London in 1835. Falmouth at that time was an important port for the Post Office Packet Service but the idea of such a long line was too complex and poorly thought out to succeed. A new proposal was advanced in 1839, this time led by Cornishmen, to link with other railways in Devon.[2]

William Moorsom was appointed as engineer and he surveyed a line from Falmouth to Torpoint where the Hamoaze would be crossed by a train ferry to join the South Devon Railway which was proposing to construct a line to there from Exeter. At this period no train ferry had ever been constructed and this was a serious contention when Parliament was considering the railway's bill.

An Act of Parliament was eventually obtained on 3 August 1846 under the guidance of Isambard Kingdom Brunel, who had replaced the train ferry with a novel bridge at Saltash, higher up the River Tamar.

The passing of the Act was soon followed by an economic depression caused by the railway mania. Although work on construction had started at various places, it was suspended in 1848.

The Associated Companies of the South Devon Railway, Bristol and Exeter Railway and Great Western Railway had already provided much of the finance in return for a guarantee of a broad gauge line into Cornwall, and they again bailed out the Cornwall company to enable a new start to be made in 1852. A further lack of funds before the line was completed allowed the Associated Companies to tighten their grip on the company and force them to postpone the opening of any section until the line was laid across the bridge at Saltash, despite the line between Truro and Lostwithiel being ready to receive tracks much earlier. This financial arrangement also meant that the Cornwall Railway would be leased to the Associated Companies from opening day and operated by a Joint Committee of directors from the three companies plus the Cornwall Railway itself.[3]

HRH Prince Albert opened the Royal Albert Bridge at Saltash on 2 May 1859, and the line itself was opened on 4 May. 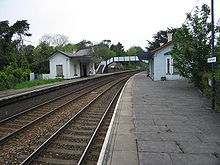 The inhabitants of Falmouth soon put pressure on the company to extend the line to their town as originally intended. In order to pay for this yet more money was needed from the Associated Companies, who forced the original short-term lease to be converted into one for 1,000 years. The extension opened on 24 August 1863. After the West Cornwall Railway was converted to broad gauge in 1867 the Truro to Falmouth line tended to be operated as a branch, with the trains from London Paddington station operating to Penzance instead.

The Bristol and Exeter Railway and South Devon Railway amalgamated with the Great Western Railway in 1876 which left this company as the majority vote in the Joint Committee. The Cornwall Railway made moves to amalgamate also, but this was not achieved until 1 July 1889. In the meantime there was a long-running dispute between the Cornwall and the Great Western over the cost of replacing Brunel's original and distinctive timber viaducts with more permanent masonry structures. The lease precluded the conversion of the line to standard gauge (which by this time had reached from London as far as Exeter), and the Cornwall Railway refused to pay for the widening of the viaducts during rebuilding to accommodate a double line of standard gauge tracks (it had been built as a single-track line).[4]

Following the amalgamation, plans were put in place for the gauge conversion, which took place over the weekend of 21 May 1892.

During the following years all the viaducts were replaced, those between Saltash and St Germans being replaced by a deviation line, the remainder being either rebuilt in situ or having a replacement viaduct built immediately alongside. Because of this, many of Brunel's original piers still remain today. Other original structures which are largely intact are the Royal Albert Bridge, many smaller masonry bridges, and the stations at Liskeard and St Germans. The stations standing at Par and Saltash were also built by the Cornwall Railway, although these were later constructions. The footbridge at St Austell is a rare example of a Great Western Railway footbridge that still retains a roof. On the Falmouth extension there is an original goods shed at Perranwell and a group of 20 workers' cottages at Falmouth.

Apart from a short branch at Keyham opened on 20 June 1867 to serve the naval dockyards, no branches were ever built by the Cornwall Railway. Independent railways did however form junctions: the West Cornwall Railway to Penzance (1859), Lostwithiel and Fowey Railway (1869), and the Newquay and Cornwall Junction Railway (1869). Other lines were proposed but failed during the economic depression following the collapse of the Overend, Gurney and Company bank, notably the Saltash and Callington Railway, and the Bodmin and Cornwall Junction Railway. The Cornwall Loop was opened at Plymouth on 17 May 1876 to avoid reversing trains in the terminus at Millbay. It was mainly used by London and South Western Railway trains at first but later found use for fast passenger and perishable goods trains. 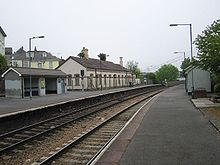 Saltash station was rebuilt in the 1880s

Note that stations opened after 1889 were opened by the Great Western Railway or British Railways. 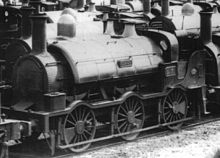 The locomotives were provided under a contract with Messrs Evans, Walker and Gooch. This enabled the expensive equipment to be provided without a huge capital outlay.[9]

Carriages and wagons were bought by the Cornwall Railway and maintained at workshops established at Lostwithiel. These workshops also had equipment for preparing timber for the viaducts and permanent way.[7]

At the opening of the line there was provided 8 first class, 18 second, 16 third, and 4 composite carriages; in 1861 a post office sorting carriage was provided. These were all six-wheel vehicles. By 1889 there was 1 less second class but 3 more third class carriages plus 6 luggage vans. Initially 30 mineral and 20 cattle trucks were provided, along with 8 brake vans, 10 carriage trucks, 8 ballast trucks, and 2 timber trucks. By 1889 this fleet had grown to 421 vehicles. There were also 15 vans for carrying meat, and 9 horse boxes.[1]