The Battle of Dakar, also known as Operation Menace, was an unsuccessful attempt in September 1940 by the Allies to capture the strategic port of Dakar in French West Africa (modern-day Senegal), which was under Vichy French control, and to install the Free French under General Charles de Gaulle there.

At the beginning of the war, the French fleet in the Mediterranean was to have countered the Italian Navy, thereby leaving the British Royal Navy free to concentrate on the German warships in the North Sea and Atlantic. After the defeat of France and the conclusion of the armistice between France and Nazi Germany in June 1940, there was considerable confusion as to the allegiance of the various French colonies. Some, like French Cameroun and French Equatorial Africa, joined the Free French, but others, such as French North Africa, French West Africa, Syria and French Indochina, remained under Vichy French control. The possibility that the French fleet might fall into German control led the British to attack the French Fleet at Mers-el-Kebir on 3 July 1940. While the British had eliminated a potential threat, the attack discouraged other units from joining the Free French and Allies.

De Gaulle believed that he could persuade the French forces in Dakar to join the Allied cause. Much would be gained by this. Another Vichy French colony changing sides would have great political impact. Also the gold reserves of the Banque de France and the Polish government in exile were stored in Dakar; and the port of Dakar as a naval base was far superior to Freetown, Sierra Leone, which was the only Allied port in the area.[3] 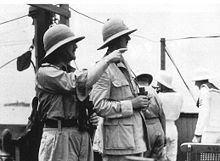 Thus, the Allies decided to send a task force to Dakar: an aircraft carrier (HMS Ark Royal), two battleships (HMS Resolution and Barham), five cruisers, ten destroyers, and several transports carrying 8,000 troops. Their orders were to negotiate with the French governor for a peaceful occupation, but if this was unsuccessful, to take the city by force.

The Vichy forces present at Dakar included the unfinished battleship Richelieu, one of the most advanced warships in the French fleet, then about 95% complete. She had left Brest, France on 18 June, just before the Germans reached the port. Before the establishment of the Vichy government, HMS Hermes, a British aircraft carrier, had been operating with the French forces in Dakar. Once the Vichy regime was in power, however, Hermes left port but remained on watch, and was joined by the Australian heavy cruiser HMAS Australia. Planes from Hermes attacked the Richelieu and had struck her once with a torpedo. The French ship was immobilized but was still able to function as a floating gun battery.

A force of three cruisers (Gloire, Georges Leygues, and Montcalm) and three destroyers had left Toulon in southern France, for Dakar just a few days earlier. Gloire was slowed by mechanical troubles and was intercepted by Australia who ordered it to sail for Casablanca. The other two cruisers and the destroyers outran the pursuing Allied cruisers and reached Dakar safely. Three Vichy submarines and several lighter ships were also at Dakar.

Course of the battle

HMS Ark Royal and some of its Fairey Swordfish

On September 23, the Fleet Air Arm dropped propaganda leaflets on the city of Dakar. Then, Free French aircraft flew off Ark Royal and landed at the airport, but their crews were immediately taken prisoner. A boat with representatives of de Gaulle entered the port, but were fired upon. At 10:00, Vichy ships trying to leave the port were given warning shots from Australia. As the ships returned to port the coastal forts opened fire on Australia. This led to an engagement between the British fleet and the forts. In the afternoon Australia intercepted and fired on the Vichy destroyer L'Audacieux, setting it on fire and causing it to be beached.

Also in the afternoon, an attempt was made to set Free French troops ashore on a beach at Rufisque, to the south-east of Dakar. The attack failed due to fog and heavy fire from strongpoints defending the beach.[4] General de Gaulle declared he did not want to "shed the blood of Frenchmen for Frenchmen" and called off the assault.

During the next two days, the Allied fleet continued to attack the coastal defences and the Vichy forces continued to defend them. Richelieu was hit by two 15" shells from Barham. On the first day of action guns 7 and 8 in turret number 2 of Richelieu failed on the first round. For day 2, the crews were switched and main turret number 1 was used. Lower propellant charges were used but these gave a significant reduction in range and caused problems of fire control. Over the two days Richelieu fired a total of 24 rounds. No hits were recorded by Richelieu.

During these engagements, two Vichy submarines (Cape Town. During most of this conflict, bombers of the Vichy French Air Force (Armée de l'Air de Vichy), based in North Africa, bombed the British base at Gibraltar. On September 24 about 50 aircraft dropped 150 bombs while on September 25 about 100 aircraft dropped 300 bombs on the harbor and dockyards. Most of the bombs missed. Some damage, but few casualties were caused. Only the British armed trawler HMT Stella Sirius was sunk by direct hits.[5] Finally, the Allies withdrew, leaving Dakar and French West Africa in Vichy hands.

The effects of the Allied failure were mostly political. De Gaulle had believed that he would be able to persuade the Vichy French at Dakar to change sides, but this turned out not to be the case, a result that damaged his standing among the Allies. Even his success in the Battle of Gabon two months later did not wholly repair this damage.

English novelist Evelyn Waugh participated in the expedition as an officer in the Royal Marines. The battle has a role in his semi-autobiographical novel Men at Arms, which forms the first part of his Sword of Honour trilogy.