In chemistry, a lactone is a cyclic ester[1] which can be seen as the condensation product of an alcohol group -OH and a carboxylic acid group -COOH in the same molecule. It is characterized by a closed ring consisting of two or more carbon atoms and a single oxygen atom, with a ketone group =O in one of the carbons adjacent to the other oxygen.

Lactones are usually named according to the precursor acid molecule (aceto = 2 carbons, propio = 3, butyro = 4, valero = 5, capro = 6, etc.), with a -lactone suffix and a Greek letter prefix that specifies the number of carbons in the heterocyle — that is, the distance between the relevant -OH and the -COOH groups along said backbone. The first carbon atom after the carbon in the -COOH group on the parent compound is labelled α, the second will be labeled β, and so forth. Therefore, the prefixes also indicate the size of the lactone ring: α-lactone = 3-membered ring, β-lactone = 4-membered, γ-lactone = 5-membered, etc.

The other suffix used to denote a lactone is -olide, used in substance class names like butenolide, macrolide, cardenolide or bufadienolide.

The name lactone derives from the ring compound called lactide, which is formed from the dehydration of 2-hydroxypropanoic acid (lactic acid) CH3-CH(OH)-COOH. Lactic acid, in turn, derives its name from its original isolation from soured milk (Latin: lac, lactis). An internal dehydration within the same molecule of lactic acid would have produced alpha-propiolactone, a lactone with a 3-membered ring.

Lactones (specifically 3-methyl-4-octanolide) are found in oak trees as well as many other plants, and impart flavour to whisky.[citation needed]

Many methods in ester synthesis can also be applied to that of lactones. In one industrial synthesis of oxandrolone the key lactone-forming step is an organic reduction - esterification:[2][3] 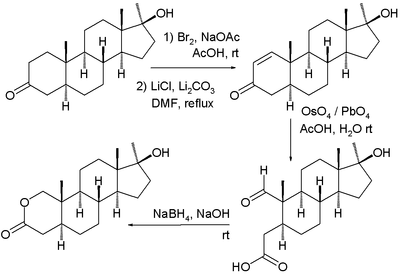 In halolactonization, an alkene is attacked by a halogen via electrophilic addition with the cationic intermediate captured intramolecularly by an adjacent carboxylic acid (See also iodolactamization), for example in this iodolactonization:[4]

A recent study has isolated β-lactones from bromination of 2,3-dimethylmaleate and/or 2,3-dimethylfumarate disodium salts, under ambient and aqueous conditions. The carboxylate groups of the maleate and fumarate moieties exhibit neighbouring group effects and alpha-lactones are proposed in the detailed mechanism.[5]

The most stable structure for lactones are the 5-membered γ-lactones and 6-membered δ-lactones because, as in all organic cycles, 5 and 6 membered rings minimize the strain of bond angles. γ-lactones are so stable that, in the presence of dilute acids at room temperature, 4-hydroxy acids (R-CH(OH)-(CH2)2-COOH) immediately undergo spontaneous esterification and cyclisation to the lactone. β-lactones do exist, but can only be made by special methods. α-lactones can be detected as transient species in mass spectrometry experiments.[6]

The reactions of lactones are similar to those of esters, as exemplified by gamma-lactone in the following sections:

Lactones can be reduced to diols using lithium aluminium hydride in dry ether. The reduction reaction will first break the ester bond of the lactone, and then reduce the carboxylic acid group (-COOH) to the alcohol group (-OH). For instance, gamma-lactones will be reduced to butan-1,4-diol, (CH2(OH)-(CH2)2-CH2(OH).

Lactones also react with ethanolic ammonia, which will first break the ester bond and then react with the acidic -COOH group, because of the basic properties of ammonia, to form a difunctional group, i.e. alcohol and amide. Gamma-lactones will react to yield CH2(OH)-(CH2)2-CO-NH2.

Sesquiterpene lactones, found in many plants, can react with other molecules via a Michael reaction.

Brominated furanones have been shown to be somewhat effective at preventing the formation of biofilm. One species has specifically been shown to increase Salmonella enterica serovar Typhimurium's susceptibility to antimicrobial treatments.[7]