The Subaru Forester is an all-wheel drive station wagon, now crossover, manufactured since 1997 by Fuji Heavy Industries. Available in Japan from 1997, in the United States from 1998, the Forester shared its platform with the Impreza up to the third generation and now features a hybrid platform of the Japanese Impreza wagon and the rear platform of the U.S.-spec Impreza sedan.[1] The Forester was designed and built with four-wheel drive (AWD) as standard equipment. Currently, the Forester is a station wagon version of Impreza, in which the wagon version is dropped and replaced with the 5-door crossover hatchback.

The Forester was introduced at the Tokyo Motor Show November 1995 as the "Sutoriga" (Stalker) concept, and made available for sale February 1997 in Japan, and to the US market in 1998 using the Impreza platform but with the larger 2.5 liter DOHC EJ25D four-cylinder boxer engine from the Outback, making 165 hp (123 kW) at 5600 rpm and 162 lb·ft (220 N·m) of torque at 4000 rpm. In Japan, the Forester replaced the Subaru Impreza Gravel Express, known in the USA as the Subaru Outback Sport. The Forester appeared after the introduction of the Nissan Rasheen in Japan with a similar appearance, and the Forester's Japanese competitors include the Toyota RAV4, the Honda CR-V, the Mitsubishi RVR, and the Suzuki Grand Vitara. The name "forester" is meant to imply the vehicle is "of the forest". Due to the Forester's low center of gravity, it meets the United States federal safety standards for Passenger Vehicles, and does not require a risk of rollover warning label on the driver's visor. Size and price wise it fits between the shared Impreza platform, and the larger Legacy.

As with all Subaru models marketed in the United States and other international markets since the early 1990s, the Forester is equipped with an all-wheel drive drivetrain. Subaru advertising employed the slogan "SUV tough, Car Easy" to appeal to the SUV-oriented market; and to this end, the Forester from its inception had features associated with SUVs such as a large, space-efficient cargo area, higher h-point seating and more ground clearance while based on unibody rather than body-on-frame construction. In some sense, the Forester met the criteria of the term crossover before the term appeared. However, the Forester is still referred to as a station wagon.

The trim levels were the basic model, followed by the "L" and the fully equipped "S" for the USA versions.

The Forester had four main models available in Australia:

A second generation was introduced in 2003, based on the new Impreza platform, featuring several fine-tune improvements over the past model. The 2003 Forester features weight-saving refinements such as an aluminum hood, perforated rails, and a hydro-formed front sub-frame. The most noticeable change was the offering of 2.5 L versions (normally aspirated and turbocharged) and in the U.S. the introduction of the turbo charged 2.5L model.

In the U.S., in 2003, a turbocharged Forester, the XT, was released alongside the naturally aspirated X and XS in the United States as a 2004 model. However, the same model had been available since the late 1990s elsewhere in the world. The X and XS models feature a 2.5 L SOHC engine, while the XT model features a 2.5 L turbocharged DOHC engine. Both engines have timing belt driven camshafts.[6] The XT model uses the same Mitsubishi TD04 turbocharger used in the Subaru Impreza WRX. The engine in the 2004 to 2005 Forester XT is identical to the American market Subaru Impreza WRX STi except for using the smaller TD04 turbocharger from the WRX, a smaller intercooler, different exhaust system, and different engine management programming. Those seeking additional power for their Forester XT can replace the turbocharger and intercooler with used STI components which are readily available. All Forester 2.5 L engines are of the interference engine type.

In 2004, Subaru launched an STI variant of the Forester, the Forester STI for the Japanese Market. It shared the same engine as the 2005 Subaru Impreza WRX STI, but thanks to different tuning generated 320 bhp (240 kW). 2005 also the introduction of Subaru's AVCS system as standard on all engines used in the Forester.

In 2006, the turbocharged engine (powering the Forester XT) was awarded International Engine of the Year.[7][8] This engine is also used in the Subaru Impreza WRX, as well as the re-badged Saab 9-2X.

All of the 2.5-liter 4-cylinder engines have a timing belt made of rubber and cord. This belt must be replaced at 105,000 miles. These engines are zero-tolerance engines, meaning that if this belt snaps the pistons will hit the valves, resulting in having to rebuild the engine. Also, if this belt is replaced around 105,000 miles, it is a good idea to change the water pump, thermostat, belt tensioner and all the idler pulleys for this belt. The water pump and thermostat are behind this belt. It makes sense to replace them at this time. In Australia for the Series II (MY06) cars, the Subaru changed the recommended service interval for the timing belt replacement from the 100,000 kilometers to 125,000 kilometres. The 3.0-liter 6-cylinder engines do not have this belt; they have a timing chain. This does not have to be replaced at 105,000 miles. The 2.5-liter 4-cylinder engine in the first-generation cars had a problem with head gaskets. For 2003 and later, they fixed this issue.

The U.S. Market was not offered the car with the 2.0L (aspirated and turbocharged) versions. Only two versions were commercialised:

The Forester had three main models available in Australia until July 2005:

The Forester at the time had three main models available in Australia from August 2005 Series II:

The Luxury Pack edition was an option on all models - allowing for leather seats and a sunroof. These options were also included with the Columbia edition. The Weekender edition included fog lamps, roof racks and alloy wheels. Standard with the Manufacture Year 2006 (MY06) Forester came with larger side mirrors with indicator lights, curtain airbags giving a 5 star safety rating, remodelled centre console and exterior with a new look nose, lights and bumpers and the rear lost the large Suburu badge under the rear window.

The Forester was sold in India as a Chevrolet alongside other unique Chevrolet models sold there. However since General Motors no longer holds an ownership stake in Subaru's parent company, Fuji Heavy Industries, sales in India of the Chevrolet-badged Forester have ended.

The MY2008 Forester was unveiled in Japan on December 25, 2007. The North American version debuted at the 2008 North American International Auto Show in Detroit.

The third generation Forester was styled by Subaru Chief Designer Mamoru Ishii.[1] The dimensions derive from engineers using the basic body structure of the Japanese-spec Impreza wagon with the rear platform of the U.S.-spec Impreza sedan.[1] The Forester's wheelbase has increased 3.5 inches (89 mm), with overall increases of 3.0 inches (76 mm) in length, 1.8 inches (46 mm) in width and 4.3 inches (110 mm) in height.[1] Notably, the third generation Forester forgoes the frameless side windows used on Subarus since the early 1970s. The third generation embraces the car based SUV, and leaves behind the older wagon design; it's larger in nearly every dimension, taller, and features a sloping roof line with more cargo space.

The independent double wishbone rear suspension has been redesigned for better handling and a smoother ride over the previous generation. "Sportshift" has been included with the four-speed computer-controlled automatic transmission. The in-dash, touch-screen satellite navigation system is Bluetooth compatible, and has the premium stereo integrated. Subaru also offers the six-speaker premium stereo, with surround sound enhancement, separate from the navigation system.

The Forester is available in Europe with the popular 2.0 liter EJ20 gasoline engine with Active Valve Control System (AVCS) matched to either 5-speed manual or 4-speed automatic gearbox, and the all-new diesel-powered horizontally opposed (boxer) engine, called the Subaru EE and six-speed manual gearbox, which was introduced at the 2008 Paris Motor Show in October.[9] The diesel engine produces a power output of 147 PS (145 hp / 108 kW).

In the UK, the gasoline-powered Forester is offered in the popular X and XS models, while trim level for the diesel models are X, XC, and XS NavPlus. 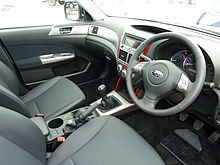 There are seven specifications with various trim and performance levels:[10]

Summary of standard trim and equipment over different Australian models.

The Forester trim levels are the 2.5X, the 2.5X Premium, the 2.5X Limited and the 2.5XT and 2.5XT Limited both with turbo. The interior colors are either black or light gray with three upholstery selections, including leather.[13] Nine exterior colors are offered, with four colors offered with a pearlescent appearance.

The USA 2.5X model has been certified PZEV emissions (Rated 175 hp (130.5 kW) instead 170 hp (126.8 kW)), and a badge has been attached to the rear of the vehicle on the bottom left-hand side of the tailgate. All other USA models have been certified LEV2. The PZEV Forester is available for sale in all fifty states, unlike other manufacturers who only sell PZEV certified vehicles in states that have adopted California emission standards. The engine without the turbo runs on unleaded gasoline rated at 87 octane, and the turbo uses premium fuel rated at 91 octane.

Safety equipment includes front airbags with side curtain airbags and front passenger side airbags (for a total of six airbags) and brake assist that detects panic-braking situations and applies maximum braking force more quickly. Problems with the ABS and OEM tires came to light during the 2010/2011 winter driving season in North America. This problem led to drivers overshooting their stopping point when the ABS reduced braking in slippery conditions to a far lower level than would have been possible without the ABS and OEM tires. Typically this problem was fixed by replacing the OEM tires with purpose-built winter tires. [15]

The manual transmission is equipped with Incline Start Assist which allows the car to remain stopped on an incline by only depressing the clutch pedal, instead of both the clutch and brake pedal.

The 2.5 XT comes with the premium stereo standard, as well as 17 inch alloy wheels, and the panoramic moonroof. The 2.5 XT Limited adds leather upholstery with heated front seats, in-dash navigation, a rear spoiler, and automatic climate control. For 2009, XT models come only with a 4-speed Automatic with Sport Shift.

Subaru produced a specialized vehicle for the National Ski Patrol based on 2.5XT turbo.[17] It includes diamond plate floor, rear steel walls, a 9,500-pound winch and a roof-mounted toboggan. The vehicle was unveiled in 2008 SEMA show.[18][19]

For 2011, the Subaru Forester gets a new grill, and the XT receives a new exclusive rear spoiler. The naturally aspirated Foresters adone a new DOHC 2.5l FB25 and 2.0l flat four FB20.