Crash Test Dummies
This article is about the band. For the mannequins, see Crash test dummy.

The band is most identifiable through Brad Roberts (vocals, guitar) and his distinctive bass-baritone voice. During its heyday, the band consisted of Roberts, Ellen Reid (co-vocals, keyboards), Brad's brother Dan Roberts (bass guitar), Benjamin Darvill (harmonica, mandolin), and Mitch Dorge (drums, percussion). Today, only Brad Roberts and Ellen Reid have appeared on every album with the other members being busy pursuing their own projects. However, the full band (minus Ben Darvill) reunited for a show in October 2010.[1]. Brad Roberts, Ellen Reid and Stuart Cameron have continued to tour throughout 2010/2011.

In many ways, the origin of the Crash Test Dummies is tied to the history of two Winnipeg nightspots, the Spectrum Cabaret and the Blue Note Cafe, owned by Curtis Riddell.

In the mid-1980s, Riddell joined with Brad Roberts to form the decidedly less-than-serious bar band Bad Brad Roberts and the St. James Rhythm Pigs. Over time, the band evolved into the Crash Test Dummies, a name suggested by a friend of the band who was in medical school. The diagnostic mannequin, known colloquially as a crash test dummy, was known to the public already by this time. Ellen Reid and Benjamin Darvill became permanent additions. George West, the original bass player, quit and was replaced by Dan Roberts, Brad's brother. Riddell was replaced by Vince Lambert, who was fired and replaced by Mitch Dorge just before the release of The Ghosts that Haunt Me.

After signing with BMG Records, the band signed with manager Jeff Rogers (Swell).[2]

The band first began to achieve commercial success in Canada with the release of The Ghosts that Haunt Me in 1991. The album eventually reached sales of 400,000 in Canada, largely due to the overwhelming popularity of the hit single "Superman's Song", which earned the band the 1991 Juno Award for Group of the Year.

The band did not receive much international recognition until the 1993 release of their second album, God Shuffled His Feet. Particularly instrumental in increasing the band's exposure in the American market was the appearance of a new type of radio format, adult album-oriented alternative rock (AAA). These stations put the first single "Mmm Mmm Mmm Mmm" in high rotation and the song peaked at #4 in the US Hot 100. "Mmm Mmm Mmm Mmm" did even better in the United Kingdom, where it was a #2 hit, and Australia where it peaked at #1.

In their native Canada, "Mmm Mmm Mmm Mmm" was a comparative disappointment on the charts, only peaking at #14. Two other songs from the album went top 10 in Canada: "Swimming In Your Ocean" and "Afternoons & Coffeespoons". This latter song was also a top 40 hit in Australia and the United Kingdom and hit the lower portion of the US Hot 100. The result was that by mid-1994 the album had passed the platinum sales mark (one million) in the United States and had also earned the band three Grammy nominations and three more Juno nominations. To date, God Shuffled His Feet has sold more than five and a half million copies worldwide.

In January 1995, the band released "The Ballad of Peter Pumpkinhead" (a cover of XTC's 1992 track) as a single and on the soundtrack of the Jim Carrey and Jeff Daniels comedy Dumb and Dumber. The single, credited to The Crash Test Dummies and Ellen Reid, charted at No. 30 in the UK singles chart and was a #4 hit in Canada. 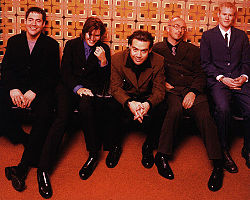 In 1996, the Dummies' third album, A Worm's Life, was released to mixed critical and moderate commercial success. The guitar-heavy singles were warmly received in some markets (lead single "He Liked To Feel It" hit #2 in Canada), but internationally nothing matched the runaway success of either "Superman's Song" or "Mmm Mmm Mmm Mmm". Still, the album went platinum in Canada in less than one month.

Give Yourself A Hand, the Dummies' fourth album, was released March 23, 1999. The album showcased a new sound for the Dummies, as it featured Ellen Reid singing lead vocals on three tracks, and Brad Roberts singing in a falsetto on several others. The whole sound of the album was much more electronic than the previous recordings. Once again, the lead single ("Keep A Lid On Things") was a top 10 hit in Canada.

During a hiatus between albums, Benjamin Darvill became the first Dummy to release solo material. Under the name Son Of Dave, Darvill first brought out the album B. Darvill's Wild West Show, followed with 01, both released on Benjamin's own label, Husky Records.[2]

The less-than-stellar commercial success of both A Worm's Life and Give Yourself a Hand resulted in the band feeling much more restricted by their label BMG, especially after the label rejected 35 songs during the production of Give Yourself a Hand. As a result, the band and the label parted ways, and Brad Roberts formed his own independent label "Cha-Ching Records" (later renamed to "Deep Fried Records").[3]

Free from major-label restrictions, the Dummies surprised their fans in 2001 by putting their solo projects on hold for a fifth studio album and tour. After suffering a near-fatal car accident in the fall of 2000, Brad found himself recuperating in the town of Argyle, Nova Scotia. It was there that he met some local "lobster fishermen" who happened to be quite musically inclined - Kent Greene, Dave Morton, and Danny MacKenzie. Together, they recorded the bulk of I Don't Care That You Don't Mind, which was to have been Brad's first solo album. Later on, Ellen was brought in to record backing vocals for a few tunes, and Dan agreed to tour with Brad. When Ellen and Mitch agreed to tour as well, the Crash Test Dummies name was put on the record. This album saw the Dummies returning to their acoustic roots. Brad compared this album to the Dummies' first, The Ghosts That Haunt Me, though he calls it more atmospheric and polished.

Near the end of 2001, some new Dummies solo albums were released. First, Ellen Reid launched her debut solo effort, Cinderellen.

2002 opened with the surprise of Mitch Dorge's debut album, As Trees Walking. On the CD, Mitch played almost all of the instruments, took some of the photos for the liner notes, and won a Prairie Music Award for Best Instrumental Recording.

Brad, Dan, and Ellen returned as Crash Test Dummies at the end of 2002 with Jingle All the Way, a long-rumoured Christmas album.

In 2003, Puss 'n' Boots was released. Much like I Don't Care, the album began life as a Brad Roberts solo project. Co-written by Stuart Cameron, 13 songs were selected from a pool of 30. Ellen sang backing vocals and Dan played bass, though much of the music - funky grooves that would not have seemed out of place on Give Yourself A Hand - was performed by other musicians.

Songs of the Unforgiven, the eighth studio album under the Crash Test Dummies name, was recorded not long after Puss 'n' Boots.[2]

After releasing three records through his own label, Roberts began to realize that he was starting to lose money. As such, he decided to stop recording and touring and he laid low in his home of New York City, while working as a songwriting teacher, trying to break into voice-over work and becoming devoted to yoga, chanting and meditation (the latter influencing Robert's side-project Satsang Circus).[4]

Despite the hiatus, in 2006 Brad Roberts began to casually record the album that would become Oooh La La with producer and friend Stewart Lerman, using the optigan and omnichord. He initially thought that the results of the sessions would just be released via online download.[5]

In September, 2007 it was announced that Sony BMG would be releasing a "best of" compilation for the band. The following month, The Best of Crash Test Dummies was released, featuring twelve tracks selected from the band's entire catalog, including most of their singles and several album tracks. The compilation would later be re-released on March 10, 2008 as "Best of Crash Test Dummies - Collections" with two previously unreleased tracks: "Laid Back" and "You Said You'd Meet Me (In California)," the latter being an early version of a song that would later appear on Oooh La La.

In addition a new online store was opened allowing users to purchase downloads from all of the band's post-BMG releases, including Cape Breton Lobster Bash series; a growing collection of songs written about Brad Roberts' experiences within Cape Breton and an annual tradition known as the "Lobster Bash."

On November 11, 2008, Roberts announced in his featured blog on the band's website that he and Ellen Reid are presently recording a new album tentatively titled Toys, adding that the other three members of the band are busy with their families and are unable to commute to New York City to contribute. The following day, Roberts specified in a subsequent journal entry that he has "about 20 songs now, and must pick the best ten." He added Ellen Reid will feature as lead vocalist on one track, which he elaborated on November 18 as "achingly beautiful". On November 23, Roberts added that some "very accomplished, high-priced players and arrangers have volunteered to play on it for free, just because they think it is extremely unique" and the record is "falling into place like a finished crossword puzzle".[6] In July 2009, the title of the album was renamed from Toys to Oooh La La.[7]

A fourth song in the Cape Breton Lobster Bash series was released on July 27, 2009.

Oooh La La was released on May 11, 2010. The album's release was accompanied by the band touring in an "Acoustic Trio" format consisting of Roberts and Ellen Reid, accompanied by either Stuart Cameron or Murray Pulver on guitar.[8] On October 9, 2010, as part of the Canadian leg of the tour, Dan Roberts and Mitch Dorge joined Brad Roberts and Ellen Reid in the band's hometown of Winnipeg for the first performance by the original line-up in a decade. Ben Darvill wasn't present for the reunion, despite having played a solo show in town a few days earlier.[1] During the tour, Brad Roberts began the habit of taking photographs at random and posting them on his blog and the band's Facebook page.

In 2011, the band continued to tour in support of Oooh La La. On April 19, 2011, the band released Demo-litions: Cast-off Recordings 1996-97 featuring previously unreleased demos of songs written during the recording of Give Yourself a Hand.

One of the biggest influences for Brad Roberts was the band XTC and Andy Partridge in particular.[2] The band even went on to cover two of XTC's songs: "The Ballad of Peter Pumpkinhead" for the soundtrack to the film Dumb and Dumber, and "All You Pretty Girls" for the XTC tribute album A Testimonial Dinner.

The Grammy Awards are awarded annually by the National Academy of Recording Arts and Sciences of the United States. Crash Test Dummies received three nominations.[9]

The Juno Awards is a Canadian awards ceremony presented annually by the Canadian Academy of Recording Arts and Sciences. Crash Test Dummies won the 1992 Juno for Group of the Year and received an additional 10 nominations.