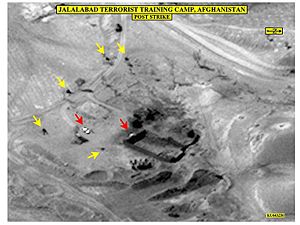 Surveillance photo of the Derunta training camp after U.S. bombardment. 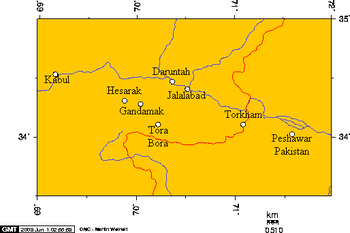 Daruntah, Kabul, Peshawar, and some cities in Nangarhar, Afghanistan.

The Derunta training camp (also transliterated as Darunta) was one of the most well-known of many military training camps that have been alleged to have been affiliated with al Qaeda.[1]

CNN published a story in which they claimed to have acquired videotapes showing al Qaeda experiments poisoning dogs with chemical weapons, at Derunta.[2]

The CIA provided intelligence, pinpointing Osama bin Laden's presence, that enabled Northern Alliance allies to bombard him in at the Derunta camp in 1999.[5]

The documents from some Guantanamo captives, such as Abbas Habid Rumi Al Naely, state that the Khalden training camp was also located in Darwanta.[6]

Some sources claim the director of the camp was Midhat Mursi.[7]

Dispute over whether Derunta was an al Qaeda camp

Other Guantanamo captives have reported that the similarly well-known Khalden training camp was not an al-Qaeda camp, and was shut down in 2000, at Osama bin Laden's request.