The Argentine National Gendarmerie (Gendarmería Nacional Argentina; GNA) is the gendarmerie and corps of border guards of Argentina.

The Argentine National Gendarmerie has a strength of 12,000.

The Gendarmerie is primarily a frontier guard force but also fulfils other important roles. The force functions from four regional headquarters at Campo de Mayo, Córdoba, Rosario and Bahía Blanca. 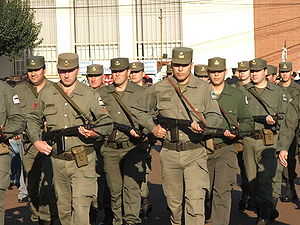 Argentine Gendarmes in Oberá in Misiones

The Gendarmerie was created in 1938 by the National Congress, and replaced the regiments of the Army which previously fulfilled the Gendarmerie's missions. The Gendarmerie was particularly tasked with providing security in isolated and sparsely populated frontier regions which had only been settled relatively recently. In many senses the Gendarmerie may still be considered an adjunct of the Argentine Army.

The Gendarmerie's mission and functions are concerned with both domestic security and national defense.

According to the Argentine Constitution, the armed forces cannot intervene in internal civil conflicts, so the Gendarmerie is subordinate to the Interior Ministry. It is defined as a civilian "security force of a military nature". It maintains a functional relationship with the Ministry of Defense, as part of both the National Defense System and the Interior Security System. It therefore maintains capabilities arising from the demands required by joint military planning with the armed forces.

The Gendarmerie's main missions are:

The Gendarmerie is also used for other security missions, which include:

Under the United Nations, the Gendarmerie has served in Guatemala, Bosnia and Herzegovina, Croatia, Angola, Lebanon, Rwanda and Haiti.

The ranks of the Argentine Gendarmerie, in ascending order, are:

The ranks up to and including Segundo Comandante are classified as Subaltern Officers (Oficiales Subalternos). Gendarmerie officers wear the same insignia as the equivalent Argentine Army rank. The National Director and his Deputy wear the insignia of an Argentine Lieutenant-General and Divisional General respectively, although they still have the rank of Commandant-General. (NB: Lieutenant-General is the highest Argentine Army rank.)