The constitution of Argentina is one of the primary sources of existing law in Argentina. Its first version was written in 1853 by a Constitutional Assembly gathered in Santa Fe, and the doctrinal basis was taken in part from the United States Constitution. It was then reformed in 1860, 1866, 1898, 1949, 1957 (which mainly derogated the 1949 reform), and the present version is the reformed text of 1994. 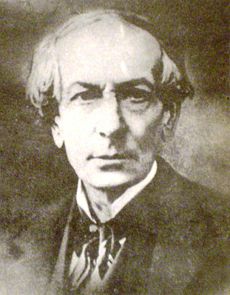 Juan Bautista Alberdi, the legal scholar who drafted the 1853 Constitution.

The first attempt to divide political power in Argentina was during the government created after the May Revolution: the Primera Junta could not create new taxes without the Cabildo's authorization.

Many revolutionary leaders, led by Mariano Moreno, wanted to declare independence immediately and to make a constitution in order to build an independent state. In October 1811, the Junta Grande, which succeeded the Primera Junta, enacted the Regulation for the Division of Power, but it was not accepted by the executive power. Nevertheless, the freedom of press and the Decree on Individual Security were accepted by November. In 1813, the General Constitutional Assembly was intended to declare a constitution but it could only declare the freedom for slaves' sons.

In 1819 and 1826 were declared two constitutions that eventually failed because of the disagreement between Federals and Centralists. Many other constitutional pacts existed between 1820 and 1853 (when the current Argentine Constitution was enacted). The most important of them are: the Treaty of Pilar (1820), the Treaty of the Cuadrilátero (1822), the Federal Pact (1831), the Palermo Protocol (1852), and the Treaty of San Nicolás (1852).

The Federal Pact urged all the provinces to call a General Federal Congress, however this would have limited Juan Manuel de Rosas's power who was the most powerful province governor, so the Congress was never called. When Rosas was defeated, in 1852, the Treaty of San Nicolás finally called the Constitutional Congress that, in Santa Fe, on May 1, 1853, sworn to make effective the federal Constitution. Consequently, the Province of Buenos Aires left the Argentine Confederation until 1859.

Reforms to the 1853 Constitution

The first constitutional amendment to the original 1853 text was performed in 1860 after Buenos Aires rejoined the Argentine Confederation. It consisted of several changes to many of the original articles. One of the major changes was the renaming of the state: according to the reform, the country would be officially named República Argentina ("Argentine Republic") and, for legal purposes, Nación Argentina ("Argentine Nation"), replacing the older Argentine Confederation denomination in all articles of the constitution. Another important inclusion was the constitutional recognizing of Buenos Aires' exclusive rights guaranteed by the Treaty of San Nicolás.

The following reform was done in 1866 and established that exportation and importation taxes would be destined to the National Treasury indefinitely, no longer until 1866 as the 1860 reform did.

In 1898, another minor constitutional amendment was approved. It allowed a more flexible ratio for proportional apportionment in the Chamber of Deputies and set the number of ministries to eight.

1949 reform during Juan Domingo Perón's government was a major revision of the constitution. Its goal was to modernize and adapt the text to the twentieth century's concepts of democracy, as for example, including a list of social rights including better working conditions for the working class, right to good education, etc. This also was included into the principles stated on the Preamble. Also, it permitted the indefinite reelection of the president.

During the military regime known as the Revolución Libertadora that had deposed Perón's government in 1955, in 1957 and before the elections that had to be held on 1958, a Constitutional Convention was elected to reform the constitution. This reform does not include 1949's, implicitly annulling it so the text was based on the 1898 one. The only changes done were to include a summary of Perón's social articles known as article 14 bis (existing currently) and to establish the necessity to have a Labour and Social Security Code.

In 1972, a "Constitutional Amendment" done by the military government led by general Alejandro A. Lanusse reformed the 1957 text. This had to last until 1977 but its application could be extended until 1981 if no Constitutional Convention in 1976 decided either to accept it or reject it definitively. This amendment was not fully applied by the democratic government of Perón in his third term nor by his wife Isabel Perón acting as President after his death. Some changes were related to the size of Senate and one-term reelection of president and vice-president. Also reduced presidential, senatorial and deputies' terms all to four years.

The last (and current) version of the Argentine Constitution was done by Carlos Saúl Menem in 1994. It included many of the modifications from the 1972 "amendment" as the growth of the Senate size (three per Province), one-term presidential reelection and reduction of its term to four years. It also made Buenos Aires City an autonomous entity with its own authorities. Other changes were done to ensure a softer presidentialist regime, the inclusion of a new chapter into the Bill of Rights related to politics, health and environment, and also the adoption of a much faster legislative procedure for creating laws.

The Argentine Constitution has four major division types; Parts, Titles, Divisions and Chapters, though these need not be present all the time. For example, the First Part is divided into Chapters but not into Titles nor Sections. The scheme of the Constitution is the following: 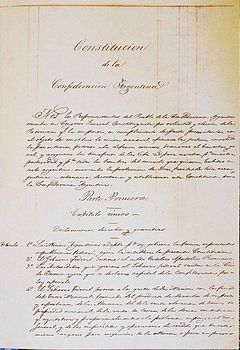 The Preamble of the Argentine Constitution states or implies, in short terms, a number of starting points for the conception of the nation, such as a representative government. It acknowledges previous agreements to create a constitution (in order to legitimize the gathering of the Assembly). Finally, it lays the foundations for the policy of support of immigration, by asking "for the protection of God, source of all reason and justice" for all people who desire to inhabit Argentina.

The Constitution establishes a Bill of Rights and Guarantees for all individuals, Argentine or foreign; the inviolability of the right of life, liberty, equality, security and property. The second chapter, added in 1994, deals with public ethics, political rights, environmental protection and consumer rights.

Civil rights are recognized to all inhabitants with no distinction of nationality. This is a consequence of the traditional interest of Argentina in the affluence of foreigners and foreign investment. Labor rights are also acknowledged (this is part of the legacy of Peronism, resulting in the 1949 and 1957 reforms). These include limited labor day, just salary, right of organization, social security benefits, etc.

The constitution declares that no one can be deprived of property, except in case of judicial sentence based on previously enacted legislation, or through expropriation for reasons of public utility, dully qualified by law and previously indemnified. The person, its judicial defense, its domicile and correspondence are inviolable.

What the law does not forbid is permitted. Individuals have complete freedom to do or refuse to do anything in private, except if that interferes with public order or morality, or causes damage to third parties.

The 1994 reform introduces several new legal figures: amparo judicial (an injunction), habeas corpus and habeas data. Injunctions are destined to protect citizens from actual or imminent damage; habeas corpus (known for a long time to Argentine jurisprudence, and related to the habeas corpus of Common Law) is to protect the citizen's physical freedom; and habeas data is a person's right to access information about himself or herself, and request its confidentiality, a change or a suppression.

Declarations state the basis that hold the nation's politics and define it as an independent entity, for example, Article 1 states that the government is representative, republican and federal and Article 35 lists the Country's official names.

They are institutional methods to protect the exercise of fundamental rights. They are so important that it is possible to say that a right can be held as long as it has a guarantee to protect it. Most of Guarantees are in the sections 18 and 43, between these are: habeas corpus, the abolition of death penalty and torture.

In Argentina, Freedom is one of the most important rights. Section 19 says that private actions of men that don't harm the public order or another man can not be judged by authorities. Moreover, it holds the "principle of legality": No inhabitant of the Nation will be forced to do what the law doesn't order nor forbidden to do what the law doesn't forbid. Equality is as important as freedom. Section 16 states that in the country there are no noble titles and "all its inhabitants are equal before the law"

According to the Constitution, Argentina is a representative federal republic, divided in provinces, municipalities, and the Autonomous City of Buenos Aires. Each province has the right and duty to dictate its own constitution, respecting the same principles as the national constitution. 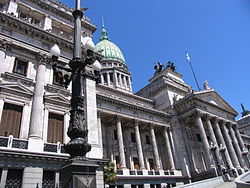 The Constitution mandates a strict separation of government powers, into three branches (Executive, Legislative, and Judicial) and the Public Ministry.

The Executive Branch is formed by the President (Art. 87). The Vice-president replaces the President in case of illness, absence from the capital, death, resignation, or removal.

The Vice-President doesn't belong to the executive branch. Curiously, it belongs to the legislative branch since he is also the president of the senate. (Art. 57)

The President promulgates the laws sanctioned by Congrees, and has veto power over them. The President directs international relations and is the Commander in Chief of the Army. In some cases, the President can issue emergency decrees.

The Legislative Branch is composed of the Vice-President, a bicameral Congress, the General Auditing Office of the Nation and the Ombudsman. Congress is divided in two Houses: Cámara de Diputados (Chamber of Deputies, the Lower House) and Cámara de Senadores (Senate, the Upper House).

The Vice-President belongs in the Legislative Branch since he (or she) is also the President of the Senate Chamber.

The General Auditing Office of the Nation is a technical advisory body of Congress with functional autonomy.

The Ombudsman is an independent body which works without receiving instructions from any authority. The mission of the Ombudsman is the defense and protection of human rights, civil rights and guarantees, and the control of the Administration.

The Judicial Branch is formed by the Supreme Court, and lower courts throughout the country. The Supreme Justices and all judges hold their offices as long as they are not deposed for misbehavior.

The Public Ministry is an independent body with functional autonomy and financial autarchy, with the function of promoting justice for the defense of legality, of the general interests of society, in coordination with the other authorities of the Republic.