The current Political Constitution of the Republic of Chile, approved by Chilean voters in a controversial and tightly controlled plebiscite on September 11, 1980, under the military dictatorship of Augusto Pinochet, partially effective March 11, 1981, fully effective 11 March 1990 and amended considerably on August 17, 1989 (via referendum) and on September 22, 2005 (legislatively), and also in 1991, 1994, 1997, 1999, 2000, 2001, 2003, 2007, 2008, 2009 and 2010, replaced the earlier constitution of 1925. In its original permanent dispositions, it gave the President of the Republic a large amount of power; however, some of these dispositions, such as the power of dissolving the Lower Chamber of Congress and serving eight year terms with possibility of reelection, were modified or eliminated after 1990, when the country regained its democracy and the Congress was reestablished. It created some new institutions, such as the Constitutional Tribunal and the controversial National Security Council (COSENA).

In its temporary dispositions, the document ordered the transition from the former military government, with Augusto Pinochet as President of the Republic, and the Legislative Power of the Military Junta (formed by the heads of the navy, air force, National Police, and a representative of the army, the head of the Army being president of the republic), to a civil one, with a time frame of eight years, during which the Legislative Power would still be the Military Junta. It set the first eight year presidential term for Pinochet, with a plebiscite in the eighth year, in which only one candidate, nominated by the Junta, would be accepted or not. The candidate, as expected, was Pinochet himself. While the steps to follow in the case of a triumph of the "yes" option, which the document obviously anticipated, were clearly delineated, the steps for the "no" triumph were less so, but still clear enough that no serious doubt emerged when the "no" option actually was victorious in the 1988 plebiscite.

After the plebiscite, several modifications to the Constitution were agreed and subjected to referendum, among them a simplification on the mechanism of future modification.

In 2005 over 50 reforms were approved, which eliminated some of the remaining undemocratic areas of the text, such as the existence of non-elected Senators (appointed senators, or senators for life) and the inability of the President to remove the Commander in Chief of the Armed Forces. These reforms led the President to controversially declare Chile's transition to democracy as complete. However, the anti-terrorist measures of it remained in force. 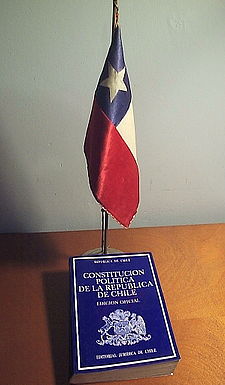 Political Constitution of the Republic of Chile of 1980