The Cornish Pirates (Cornish: An Vorladron Kernewek) are an English professional rugby union team who play in the Championship, the second level of the English rugby union pyramid, and are the premier Cornish rugby club. Formerly known as Penzance & Newlyn Pirates, the Cornish Pirates play their home games and train at their traditional home at Mennaye Field in Penzance.

There has been recent talk of plans to build a permanent 15,000 seat stadium which will be fit to host Premiership rugby, but at present the club is considering its options as the minimum entry requirements to the Premiership are constantly changing.

At the end of the 2004/05 season the Pirates finished in 4th position in National Division 1 which at the time was their highest league position since owner Dicky Evans became President and just 3 places below Premiership rugby status. To fulfill the club's aspirations of gaining promotion into the Premiership it is necessary to fulfill a number of criteria including becoming a Limited Company and playing home matches in a new capacity stadium.

The decision to relocate

In 2005 the Pirates moved away from their home at The Mennaye in Penzance, first to Kenwyn Rugby Ground, near Truro, and then to Camborne Recreation Ground. In examining the options it was viewed as imperative to increase the support base which led to a difficult decision for Dicky Evans and the supporters of the Pirates namely, should the team relocate to another site to play their home matches or not? The questions, concerns and sentiments arising from the proposals were thoroughly debated in the clubhouse and elsewhere. However, on 27 May 2005 at an emergency meeting held in a packed St Johns Hall the innovative plans were passed. They included:

Following the vote Richard Evans told members: "ten years ago I asked you to support me in taking this club into the professional era. At that time there were those were totally against this move, there are people that are against this latest move. However, it is my belief that we must try this venture". He expressed his personal happiness at the support expressed for the move and regarded it as a step towards a Premiership rugby club in Cornwall.

Cornwall Council is currently developing a business plan for a proposed Stadium for Cornwall, which could host both the Pirates and Truro City Football Club.[1] 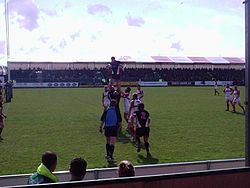 Following a highly successful 2005/6 season, (when crowds were increased and the Pirates finished 3rd in Division 1), it was decided to relocate again and over the next two seasons the Cornish Pirates will play their home rugby matches at Camborne RFC's recreation ground. Camborne's ground is seen as many to be the best rugby ground in Cornwall boasting a superb grandstand. 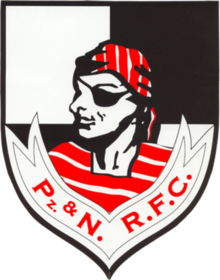 The Pirates say they intend to make match days an "event" as they did last year at Kenwyn and as the Camborne Recreation Ground accommodates over 9,000 people with a stand capacity of 780, and a new Family Stand of allowing for more than 1,000. There is also good banked standing, a 80-foot-long (24 m) marquee bar complete with Cadgwith Singers and ample parking at or near the ground.

Cornish Pirates continue to work towards developing a stadium that will be required to ensure Premiership status. They are reportedly working with Cornwall County Council, and other partners, and at various sites near Truro, Camborne, or points in between. The Camborne Rec is a popular and historic Cornish rugby venue, having hosted many top class games over the years against teams including the "All Blacks" and the "Wallabies".

On 15 April 2007, the Cornish Pirates won the EDF Energy National Trophy at Twickenham for the first time in the club's history, against Exeter Chiefs. The score was 19–16.

After the success of the 2006/7 cup win, the hope was that the club’s ambition could finally be realised, this hope was hampered by the loss of Viliami Ma'asi and Alberto Di Bernardo (to Leeds), these losses were offset in some degree by the signing of Canadian international scrum half Ed Fairhurst, former England U21 centre Simon Whatling from Worcester and seasoned professional Rob Elloway from Gloucester. At first the results were not good but after the world cup the team began to pick up and were joined by one of the stars of the tournament Tongan full back; Vunga Lilo. Unfortunately the side couldn’t live with the newly relegated Northampton Saints and were unlucky to draw them in the 1st round of the cup, going down 15–3 at home.

Note: Flags indicate national union as has been defined under IRB eligibility rules. Players may hold more than one non-IRB nationality.