Jizi (Chinese:箕子, Gija in Korean)[1] was a semi-legendary Chinese sage who is said to have ruled Gojoseon in the 11th century BCE. Early Chinese documents like the Book of Documents and the Bamboo Annals described him as a virtuous relative of the last king of the Shang dynasty who was punished for remonstrating the king. After Shang was overthrown by Zhou in the 1040s BCE, he allegedly gave political advice to King Wu, the first Zhou king. Chinese texts from the Han dynasty (206 BCE – 220 CE) onwards claimed that King Wu enfeoffed Jizi as ruler of Chaoxian (朝鮮, pronounced "Joseon" in Korean). According to the Book of Han (1st century CE), Jizi brought agriculture, sericulture, and many other facets of Chinese civilization to Joseon.

Gija (the Korean pronunciation of "Jizi") may have been the object of a state cult in sixth-century Koguryeo, and a mausoleum to him was established in Goryeo in 1102, but the first extant Korean text to mention Gija was the Samguk Sagi (1145). Starting in the late thirteenth century, Gija was fully integrated into Korean history, being described as a successor to the descendants of Dangun in the state of Old Joseon. Following the spread of Neo-Confucianism in Korea in the fourteenth century, scholars of the Joseon Dynasty (est. 1392) promoted Gija as a culture hero who had raised Korean civilization to the same level as China, and Gija became an integral part of Korean cultural identity.

Following the rise of Korean nationalism in the late nineteenth and early twentieth century, however, Korean intellectuals lost their pride in association with Gija and started to doubt the traditional account of his enfeoffment as ruler of Gojoseon. Shin Chaeho (1880–1936) questioned the extent of Gija's cultural contributions, in part because Gija, a Chinese, did not fit into Shin's view of Korean history as the history of the Korean minjok, or "race-nation." Postwar Korean scholars in both North and South Korea have also strongly criticized the story of Gija's migration to Korea in the eleventh century BCE.

The earliest known mention of Jizi is in the "Mingyi" 明夷 hexagram of the Book of Change.[2] According to other ancient Chinese texts like the Book of Documents, the Analects, and the Bamboo Annals, Jizi was a relative of King Zhou, the last ruler of the Shang Dynasty, and one of the three wise men of Shang, along with Weizi (微子) and Bigan.[3] Some[who?] identify him as Grand Tutor of the king. Jizi was either imprisoned or enslaved for remonstrating against King Zhou's misrule.[3] (One later version states that he pretended to be mad after Bigan had been killed by King Zhou.)[4] After Shang was overthrown by the Zhou dynasty in the mid eleventh century BC, Jizi was released by King Wu, to whom he gave advice on how to rule the new polity.[3]

These texts mention neither Joseon nor Jizi's descendants; they simply describe Jizi as a virtuous man who was trusted by King Wu of Zhou after having been mistreated by the last Shang king.[3]

Sima Qian's Records of the Grand Historian (Shiji; ca 100 BCE) was one of the earliest works to claim that Jizi was enfeoffed by King Wu of Zhou as ruler of Chaoxian (= Joseon).

The first texts that make an explicit connection between Jizi and Joseon date from the second century BC, under the Han dynasty.[5] The earliest known source stating that Jizi went to Joseon is the Shangshu dazhuan (尚書大傳), a commentary on the Book of Documents attributed to Fu Sheng (伏勝) of the second century BC.[3] In that account, King Wu enfeoffed Jizi as the ruler of Joseon and Jizi became the subject of King Wu.[6] In a similar story recorded in Sima Qian's Records of the Grand Historian (or Shiji, compiled between 109 and 91 BC), Jizi was enfeoffed by King Wu but did not become his subject.[5] Sima Qian did not mention Jizi in his section on contemporary Joseon (i.e. northwestern Korea), where Wei Man's kingdom had flourished since about 194 BC until it was conquered by the Han Dynasty in 108 BC.[5] Thus the location of Joseon as in these earlier sources is not clear. Among Han-Dynasty sources, the Hanshi waizhuan mentions to Jizi but not to Jizi's migration to Joseon.

The "Monograph on Geography" (Dili zhi 地理志) of the Book of Han (1st century AD) claimed that Jizi had taught the people of Joseon agriculture, sericulture, and weaving, as well as proper ceremony.[7] Jae-hoon Shim interprets the following sentence in that section of the Hanshu as claiming that Jizi also introduced the law of "Eight Prohibitions" (犯禁八條) in Joseon.[8] The Records of Three Kingdoms (first published in the early fifth century) claim that the descendants of Jizi reigned as kings of Joseon for forty generations until they were overthrown by Wei Man, a man from the state of Yan, in 194 BC.[9]

According to a commentary to the Shiji, Du Yu (first half of the 3rd century) stated that the tomb of Jizi was located in Meng Prefecture of the State of Liang (modern-day Henan). This suggests that the story of Jizi's association with Joseon was not necessarily prevailing although the narrative seen in the Hanshu later became common.

As historian Jae-hoon Shim concludes, only during the Han dynasty (206 BC – 220 AD) did Jizi begin to be associated with Joseon, and only after the Han were his descendants identified as the Joseon royal family.[5]

Interpretations of Gija in Korea 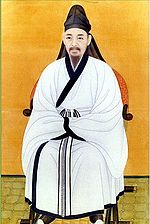 Yi I (1536–1584), an eminent Neo-Confucian scholar of the Joseon Dynasty, praised Gija as a culture hero who had brought Chinese civilization to Gojoseon in the eleventh century BCE.

The first extant Korean text to mention Gija (the Korean pronunciation of Jizi) was Kim Busik's Samguk Sagi (completed in 1145), which claimed that Gija had been enfeoffed in Haedong (海東: Korea) by the Zhou court, but commented that this account was uncertain because of the brevity of the sources.[10] Only in the thirteenth century did Korean texts start to integrate Gija more fully into Korean history. The Samguk Yusa (1281) explained that after being enfeoffed by King Wu of Zhou, Gija replaced Dangun's descendants as the ruler of Joseon, whereas Jewang Ungi (1287) identified Dangun and Gija as the first rulers of former and latter Joseon respectively.[10] Most premodern Korean historians after that accepted that Gija had replaced another indigenous power (represented by Dangun) in Old Joseon.[10]

In 1102, during the Goryeo Dynasty, Emperor Sukjong built a mausoleum to Gija in a place near Pyongyang that had been identified as Gija's tomb.[11] The mausoleum was rebuilt in 1324 and repaired in 1355, but the cult of Gija spread most widely after the establishment of the Joseon Dynasty in 1392. Because Joseon's state ideology was Neo-Confucianism borrowed from China, Joseon intellectuals promoted Gija as a culture hero who had raised Korean civilization to the same level as China.[12]

From the second half of the sixteenth century to the eighteenth century, Joseon scholars published a number of books on Gija. In 1580, Yun Dusu (尹斗壽) collated all available material on him and published his research as the Gijaji (箕子志; "Record of Gija").[12] On the same year, eminent scholar Yi I used Yun's book to compile the Gija Silgi (箕子實記), or True Account of Gija.[12] Yi praised Gija for introducing agriculture, sericulture, decorum, the well-field system, and the Eight Prohibitions.[13] Though he emphasized Gija's independence from King Wu of Zhou, Yi believed that Kija's teachings helped Korea to reach the same level of civilization as China.[14]

Although Korean scholars became more critical of Kija's role in the eighteenth and nineteenth centuries, this account of Gija as the "bearer of civilization from China" became widely accepted, so much that by the late Joseon, the worship of Kija "had become an integral part of Korean cultural identity."[15] Some Korean clans proudly claimed descent from Gija.[16] 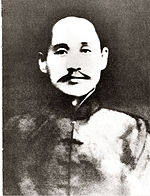 In his New Reading of History (1908), Shin Chaeho (1880–1936) denied Gija's civilizing role in Korea, because Gija's Chinese origin went against Shin's reinterpretation of Korean history as the history of the racially defined Korean minjok (nation).[17]

Following the decline of China's prestige and the rise of Korean nationalism in the early twentieth century, Korean intellectuals no longer took pride in their association with the Chinese Gija, and thus started to doubt the authenticity of his traditional story.[14] Shin Chaeho (1880–1936) was the first to question the extent of Gija's contributions.[14] In an essay titled Doksa Sillon ("New Reading of History"; 1908), he argued that Korean history was the history of the Korean minjok, a race-nation descended from Dangun, the mythical founder of the state of Gojoseon.[18] Gija, a foreigner, did not belong in Shin's racially defined view of Korean history.[19] Shin argued instead that Gija had become a vassal of the Kings of Buyeo and was only given control of a small territory.[20]

Going further than Shin, Choe Nam-seon (1890–1957) and Lee Byeong-do (1896–1989) started to notice discrepancies between pre-Qin Chinese records of Jizi/Gija, and later accounts (both Chinese and Korean) of his role in Joseon.[21] In 1973, archeologist Kim Cheong-bae (金貞培) denied Chinese influence on Korea because no ancient Chinese bronzes had been found on the peninsula.[22]

After the end of Japanese colonial rule in 1945, nationalist historians in both North and South Korea targeted Gija.[23] Ri Chirin, a leading North Korean historian of ancient Korea, argued that the Gija legend had been forged in Han times when the Chinese started to occupy part of Joseon.[24] Most North Korean scholars have followed Ri in doubting the authenticity of Gija's migration to Joseon.[25]

In South Korea, whether Gija and his state actually existed is a matter of controversy. Korean scholars deny its existence for various reasons.[26] These scholars point to the Bamboo Annals and the Confucian Analects, which were among the first works to mention Gija, but do not mention his migration to Gojoseon.[27] Detractors of the Gija Joseon theory also point out that the cultural artifacts found in the region do not appear to have Chinese origins. An example of such an artifact is found in a Gojoseon mandolin-shaped bronze dagger. Its shape and bronze composition are different from similar artifacts found in China.

The national-history textbook of high school education drove Gija's description out of the main text and he was marginally mentioned in a note.[28] The textbook of the latest 7th Curriculum completely eliminates Gija.

On the contrary, some South Korean historians believes that Gija Joseon coexisted with Dangun, and Gija Joseon was established at the west end of Gojoseon.

Because it is confirmed that early Chinese history books reflect historical facts at least from the late Shang Dynasty onwards, the Jizi described in pre-Qin sources is generally considered a real character. Cultural material evidences suggest that a small city state in Liaoning was ruled by Jihou (㠱侯) or Lord Ji under the Yan Kingdom.[29] Jihou may be the model of Jizi.

As for post-Qin sources, the story in the Weilüe is controversial because it contains information that cannot be found in preceding materials. Japanese scholar Imanishi Ryū presumed that this story had spread to China because of Chinese direct rule of the northwestern part of the Korean peninsula during the Han dynasty and that the source of information would have been the influential Chinese Han clan of the Lelang Commandery, who might have claimed themselves as descendants of Jizi.