The McCallie School is a boys college-preparatory school located on Missionary Ridge in Chattanooga, Tennessee, USA. The school was founded in 1905 and now educates a student body comprising 230 boarding students in grades 9-12 and 660 day students in grades 6-12. 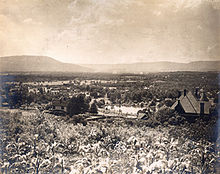 Brothers Spencer Jarnigan and James Park McCallie founded a school in 1905 because, as Park would later explain, they recognized that "education in the South desperately needed every help it could get."[1] Both McCallie brothers had backgrounds in education. Park had taught for two years at Culver Academy after receiving a doctorate from The University of Virginia. Spencer had taught science at Chattanooga High School and had served for two years as the superintendent of public schools in Cleveland, Tennessee before he pursued graduate work at The University of Chicago. The brothers wrote that they wanted to establish a "first class University school,"[2] and they began it with 40 acres (160,000 m2) of farm land, 2 houses, and a $2000 grant from their father.[3] The brothers, however, eschewed an exclusively academic model for education. They believed that moral and physical education should accompany academics, and since they could not finance this vision outright, they laid the foundation of a 30 by 60-foot (18 m) gymnasium with their own hands. The school opened on September 21, 1905 and by the end of the first term, enrollment had grown from 42 boys to 58.[4] Tuition was $50 a semester,[5] and teachers and headmaster alike earned $50 a month.[6] By the school's 15th anniversary in 1919 the student body had grown to 280 students.[7]

The McCallie School mission is to prepare its students for college and life. The school is dedicated to the academic, physical, spiritual and emotional growth of boys. It seeks to inspire and motivate them: to pursue excellence and take pride in their work and achievements, to lead lives of personal honor, to be responsible in family and personal relationships, and to manifest concern for others.[8] 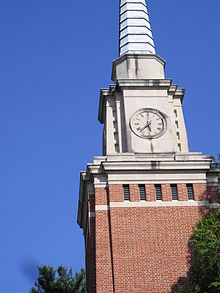 The student body adopted an honor code in 1906 which requires every student to write and sign his name to the following "Honor Pledge" whenever he submits a major assignment: This work is my own. I have neither given nor received any unauthorized help on this assignment.[9]

The Senate, a group of students elected each year by the student body, administers the Honor Code with the assistance of a faculty adviser. The code does not require students to turn one another in, and a boy must generally be convicted of two honor violations before he is expelled.

Students are required to take five to six classes per semester. At least four of these courses must be from the Core Program, which includes: English, Math, History, Foreign Language, and Science. The remaining course load may be filled with courses such as Public Speaking, Health, Bible, Fine Arts, or other elective courses.

McCallie’s 6-12th grade student body consists of 890 students. Of these, approximately 220 are boarding students hailing from 21 different states and 5 foreign countries. That number will soon increase with the starting construction on Burns Dormitory. All boarding students are in grades 9-12. 265 Middle School day students comprise grades 6-8.

McCallie's campus consists of 110 acres (0.4 km2) on the western slope of Missionary Ridge, the site of a major battle during the American Civil War. It is located 3 miles (4.8 km) east of downtown Chattanooga, and a major expansion program over the past few years has extended the campus southward and increased the number of athletic fields. The campus stretches from McCallie Avenue on the north to Main Street on the South and from the crest of Missionary Ridge on the East to Dodds Avenue on the West.

The second-newest building on campus is Pressly Hall, a 56-bed residence hall for freshmen that was completed before the beginning of the 2007-2008 school year. The newest building, Burns Hall, opened for the 2010-2011 school year. Burns, located adjacent to Pressly on the Ridge, is a 56-bed residence hall with an astonishing view over the city of Chattanooga. In the Spring of 2004, a 32,000-square-foot (3,000 m2) dining hall opened, and it more than tripled the amount of space available in the former dining facility (Alumni Hall).[10] The 1999 completion of McDonald Hall provided a new home for the Middle School and made room for McCallie’s first-ever sixth grade class.[11] The Hunter Arts Building and the 5-story Maclellan Academic Building opened their doors in 1976.[12]

McCallie’s most prominent facility may be the 180,000-square-foot (17,000 m2) Sports and Activities Center (SAC) completed in 1993. This building contains five basketball courts, a 25-yard (23 m)-by-25-meter pool, a wrestling room, a weight room, an indoor track, a racquetball court, and a climbing gym. Other athletic facilities include the 4,000-seat Spears stadium recently outfitted with artificial turf, a six-lane track, two indoor and twelve outdoor tennis courts, three baseball fields, 2 lacrosse fields, a soccer field, 2 intramural fields, and an outdoor recreational swimming area known as McCallie Lake. The diving tower, which rises out of the middle of the lake, is the oldest structure on the campus.[13] 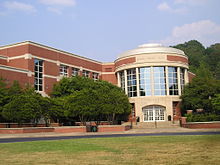 The Sports and Activities Center

In 2010, the football team was beaten by rival Baylor School for the third time in two years. Prior to the first loss, the team had had an 11-year winning streak.

S.P.I.R.I.T.U.A.L.S. is a student organization elected to lead chants at athletic contests. The group is notorious for Will Ferrel-style skits and jokes during assemblies. Their mission is to boost team spirit.

The school offers many opportunities to students who do not wish to compete on the varsity level. Almost every varsity team has some combination of a JV team, a B team, or a ninth-grade team that enable younger or less skilled athletes to develop their skills and enjoy competition. An intramural program offers opportunities such as karate, juggling, and racquetball, as well as intramural competition in traditional sports. This program is called "PFC" - Personal Fitness and Conditioning. The Outdoor Program offers students an opportunity to hike, kayak, and climb in the afternoons after class as well as on weekend and holiday trips.

In addition to athletic afternoon activities, students also have the opportunity to participate in a variety of artistic, intellectual, or service oriented activities. These include the annual Candlelight Concert, the spring musical, a series of dramas, debate, mock trial, the Honors Orchestra, the Jazz Band, the Chamber Singers, the Pep Band, the Community Service Organization, as well as the school newspaper, (The Tornado), the yearbook (The Pennant), and the literary magazine (The Argonaut).[14] In 2001, the American Scholastic Press Association named The Argonaut the “Best Multi-Issue High School Magazine.”[15]

The school maintains an ongoing rivalry with nearby Baylor School, which primarily manifests itself in athletic competitions such as football. In fact, both schools place a priority on "The McCallie-Baylor Game" in lieu of a "homecoming" game. The longest streak held by either team is 11 consecutive years by McCallie, from 1998 to 2009.