The Indian Creek massacre occurred on May 21, 1832, when a group of United States settlers in LaSalle County, Illinois, were attacked by a party of Native Americans. The massacre was sparked by the outbreak of the Black Hawk War, but it was not directly related to Sauk leader Black Hawk's conflict with the United States. Instead, the incident stemmed from a settler's refusal to remove a dam that jeopardized a food source for a nearby Potawatomi village. After the Black Hawk War began, between 40 and 80 Potawatomis and three Sauks attacked the settlement. Fifteen settlers, including women and children, were killed. Two young women kidnapped by the raiders were ransomed and released unharmed about two weeks later.

In the aftermath of the massacre, white settlers fled their homes for the safety of frontier forts and the protection of the militia. After the war ended, three Native men were arrested for the murders, but the charges were dropped after witnesses could not confirm that they had taken part in the massacre. Today, the site of the massacre is marked by memorials in Shabbona County Park in LaSalle County, about 14 miles (23 km) north of Ottawa, Illinois.

The Indian Creek massacre stemmed from a dispute between U.S. settlers and a Potawatomi Native American village along Indian Creek in LaSalle County, Illinois. In the spring of 1832, a blacksmith named William Davis dammed the creek to provide power for his sawmill.[1] Meau-eus, the principal chief of the small Potawatomi village, protested to Davis that the dam prevented fish from reaching the village. Davis ignored the protests and assaulted a Potawatomi man who tried to dismantle the dam. The villagers wanted to retaliate, but Potawatomi chiefs Shabbona and Waubonsie managed to keep the peace, convincing the villagers to fish below the dam.[2]

Meanwhile, in April 1832, a Sauk leader named Black Hawk led a group of Sauks, Meskwakis, and Kickapoos known as the "British Band" across the Mississippi River into the U.S. state of Illinois. Black Hawk's motives were ambiguous, but he was apparently hoping to avoid bloodshed while resettling on land that had been ceded to the United States in a disputed 1804 treaty.[3]

Hostilities in the Black Hawk War began on May 14, 1832, when Black Hawk's warriors soundly defeated Illinois militiamen at the Battle of Stillman's Run. Potawatomi chief Shabbona worried that Black Hawk's success would encourage Native attacks on American settlements, and that Potawatomis would be held responsible. Soon after the battle, Shabbona, his son, and his nephew rode out to warn nearby American settlers that they were in danger.[8] Many people heeded the warnings and fled to Ottawa for safety, but William Davis, the settler who had built the controversial dam, decided to stay. Davis convinced some of his neighbors that danger was not imminent.[9] Twenty-three people remained at the Davis settlement, including the Davis family, the Hall family, the Pettigrew family, and several other men.[10]

On the afternoon of May 21, 1832, a party of about forty to eighty Potawatomis attacked the Davis house.[11] Three Sauks from Black Hawk's band accompanied the Potawatomis.[12] It was late afternoon when the inhabitants at the settlement saw the group of Native American warriors approach the cabin, vault the fence and sprint forward to attack.[13] When the attack began, a number of men and boys were working in the fields and in the blacksmith's shop. Several men rushed to the house during the attack and were killed, but six of the young men escaped the slaughter by fleeing.[14] In all, fifteen settlers were killed and scalped.[15] "The men and children were chopped to pieces," writes historian Kerry Trask, "and the dead women were hung up by their feet" and their bodies mutilated in ways too gruesome for contemporary observers to record in writing.[16]

Most modern scholars do not name a leader of this attack. According to historian Patrick Jung, the attack was led by the Potawatomi man who had been assaulted at the dam by Davis, but Jung did not identify this Potawatomi by name.[17] Historians Kerry Trask and John Hall identified the man who had been assaulted as Keewassee, but they did not specifically describe him as taking part in the attack, nor did they name a leader of the attack.[18] Historian David Edmunds wrote that the attack was led by Toquame and Comee, two Potawatomi warriors. According to Jung, however, Keewasse, Toquame, and Comee were three Sauk warriors who accompanied the Potawatomis during the attack.[19]

In 1872, amateur historian Nehemiah Matson wrote that the raid was led by a man named Mike Girty, who was supposedly a mixed race son of Simon Girty.[20] But a 1960 profile of Matson stated that "Because of his indiscriminate mixing of fact and legend, however, scholars generally discount his books as valid sources."[21] In a 1903 book, Frank E. Stevens dismissed Matson's story, writing that "The statement by Matson that one Mike Girty was connected with the Indian Creek massacre is incorrect."[22] Modern scholarly accounts of the Black Hawk War and the Indian Creek massacre make no mention of Mike Girty.

Two young women from the settlement, Sylvia Hall (age 19) and Rachel Hall (age 17),[25] were spared by the attackers and taken northwards. At one point, Sylvia fainted when she recognized that one of the warriors carried her mother's scalp.[26] After a hard journey of about 80 miles,[27] they arrived at Black Hawk's camp.[28] The Hall sisters were held for eleven days. Most of the time was spent at Black Hawk's camp where they were treated well.[13] In his memoirs dictated after the war, Black Hawk insisted that the three Sauks with the Potawatomis had saved the Hall sisters' lives. Black Hawk recounted:

They were brought to our encampment, and a messenger sent to the Winnebagoes, as they were friendly on both sides, to come and get them, and carry them to the whites. If these young men, belonging to my band, had not gone with the Pottowittomies [sic], the two young squaws would have shared the same fate as their friends.

A Ho-Chunk chief named White Crow negotiated their release.[29] Like some other area Ho-Chunks, White Crow was trying to placate the Americans while clandestinely aiding the British Band.[30] U.S. Indian agent Henry Gratiot paid a ransom for the girls of ten horses, wampum, and corn. The Hall sisters were released on June 1, 1832.[13]

The Indian Creek massacre was one of the most famous and well publicized incidents during the Black Hawk War.[31] The killings triggered panic in the white population nearby. People abandoned settlements and sought refuge inside frontier forts, such as Fort Dearborn in Chicago. 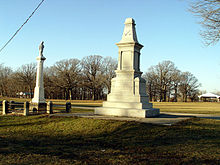 Monuments at the massacre site in Shabbona County Park, the older monument is on the left.

On May 21 or 22, the people in Chicago, including those who had fled there, dispatched a company of militia scouts to ascertain the situation in the area between Chicago and Ottawa, along the Chicago to Ottawa trail. The detachment, under the command of Captain Jesse B. Brown, came upon the mangled remains of the 15 victims at Indian Creek on May 22. They buried the dead and continued to Ottawa where they reported their grisly discovery.[32] As a result, the Illinois militia used the event to draw more recruits from Illinois and Kentucky.[31]

After the war, three Natives were charged with murder for the Indian Creek massacre and warrants were issued at the LaSalle County Courthouse for Keewasee, Toquame, and Comee. The charges were dropped when the Hall sisters could not identify the three men as part of the attacking party. In 1833, the Illinois General Assembly passed a law granting each of the Hall sisters 80 acres (320,000 m2) of land along the Illinois and Michigan Canal as compensation and recognition for the hardships they had endured.[33]

In 1877, William Munson, who had married Rachel Hall, erected a monument where the victims of the massacre were buried.[34] The monument, located 14 miles (23 km) north of Ottawa, Illinois, cost $700 to erect.[34] In 1902, the area was designated as Shabbona Park, and $5,000 was appropriated by the Illinois legislature for the erection and maintenance of a new monument.[34] On August 29, 1906, a 16-foot granite monument was dedicated in a ceremony attended by four thousand people.[34] Shabbona County Park, not to be confused with Shabbona Lake State Park in DeKalb County, is located in northern LaSalle County, west of Illinois Route 23.[35]