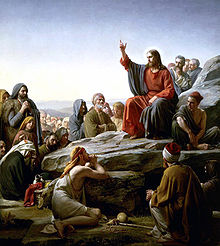 Jesus is considered by scholars such as Weber to be an example of a charismatic religious leader.

In his writings about charismatic authority, Weber applies the term charisma to "a certain quality of an individual personality, by virtue of which he is set apart from ordinary men and treated as endowed with supernatural, superhuman, or at least specifically exceptional powers or qualities. These are not accessible to the ordinary person, but are regarded as of divine origin or as exemplary, and on the basis of them the individual concerned is treated as a leader [...] How the quality in question would be ultimately judged from an ethical, aesthetic, or other such point of view is naturally indifferent for the purpose of definition."[1]

Charismatic authority is 'power legitimized on the basis of a leader's exceptional personal qualities or the demonstration of extraordinary insight and accomplishment, which inspire loyalty and obedience from followers'.[2] As such, it rests almost entirely on the leader; the absence of that leader for any reason can lead to the authority's power dissolving. However, due to its idiosyncratic nature and lack of formal organization, charismatic authority depends much more strongly on the perceived legitimacy of the authority than Weber’s other forms of authority. For instance, a charismatic leader in a religious context might require an unchallenged belief that the leader has been touched by God, in the sense of a guru or prophet.[3] Should the strength of this belief fade, the power of the charismatic leader can fade quickly, which is one of the ways in which this form of authority shows itself to be unstable. In contrast to the current popular use of the term charismatic leader, Weber saw charismatic authority not so much as character traits of the charismatic leader but as a relationship between the leader and his followers — much in the same way that Freud would transform Gustave Le Bon's crowd psychology through the notion of identification and of an Ideal of the Ego. The validity of charism is founded on its "recognition" by the leader's followers (or "adepts" - Anhänger). This recognition "is not (in authentic charism) the grounds of legitimity, but a duty, for those who are chosen, in virtue of this call and of its confirmation, to recognize this quality. "Recognition" which is, psychologically, a completely personal abandon, full of faith, born either from enthusiasm or from necessity and hope. No prophet has seen his quality as depending from the crowd's opinion towards himself", although his charisma risks disappearing if he is "abandoned by God" or if "his government doesn't provide any prosperity to those whom he dominates".

Note that a Weber-style charismatic leader need not be a positive force;[4] Furthermore, sociology is axiologically neutral (Wertfreie Soziologie) towards various forms of charismatic domination: it does not differentiate between the charisma of a Berserker, of a shaman or of that displayed by Kurt Eisner. For Weber, sociology considers these types of charismatic domination in "an identical manner to the charisma of heroes, prophets, the "greatest saviours according to common appreciation".

Charismatic authority almost always evolves in the context of boundaries set by traditional or rational (legal) authority, but by its nature tends to challenge this authority and is thus often seen as revolutionary.[7][8] However, the constant challenge that charismatic authority presents to a particular society will eventually subside as it is incorporated into that society. The way in which this happens is called routinization.

Some leaders may employ various tools to create and extend their charismatic authority; for example utilizing the science of public relations.

As in the example of Christianity, a religion which evolves its own priesthood and establishes a set of laws and rules is likely to lose its charismatic character and move towards another type of authority upon the removal of that leader.

In politics, charismatic rule is often found in various authoritarian states, autocracies, dictatorships and theocracies. In order to help to maintain their charismatic authority, such regimes will often establish a vast personality cult, which can be seen as an attempt to gain legitimacy by an appeal to other forms of authority. When the leader of such a state dies or leaves office and a new charismatic leader does not appear, such a regime is likely to fall shortly thereafter unless it has become fully routinized.

Weber’s model of charismatic leadership giving way to institutionalization is endorsed by several academic sociologists, such as Eileen Barker. In a book written for the general public Barker discusses the tendency for new religious movements to have founders or leaders who wield considerable charismatic authority and are believed to have special powers or knowledge. Charismatic leaders are unpredictable, Barker says, for they are not bound by tradition or rules and they may be accorded by their followers the right to pronounce on all aspects of their lives. Barker warns that in these cases the leader may lack any accountability, require unquestioning obedience, and encourage a dependency upon the movement for material, spiritual and social resources.[9] George D. Chryssides asserts that not all new religious movements have charismatic leaders, and that there are differences in the hegemonic styles among those movements that do.[10]

Len Oakes, an Australian psychologist who wrote a dissertation about charisma, had eleven charismatic leaders fill in a psychometric test, which he called the adjective checklist, and found them as a group quite ordinary. Following the psychoanalyst Heinz Kohut, Oakes argues that charismatic leaders exhibit traits of narcissism and also argues that they display an extraordinary amount of energy, accompanied by an inner clarity unhindered by the anxieties and guilt that afflict more ordinary people. He did however not fully follow Weber's framework of charismatic authority.[11]