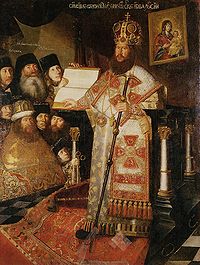 Nikon (Russian: Ни́кон, Old Russian: Нїконъ), born Nikita Minin (Никита Минин; 7 May 1605 Valmanovo, Tsardom of Russia—17 August 1681), was the seventh patriarch of the Russian Orthodox Church. This was one of the most important periods in the Church's history, as Nikon introduced many reforms which eventually led to a lasting schism known as Raskol in the Russian Orthodox Church.

Son of a Mordovian peasant farmer named Mina, he was born on 7 May 1605 in the village of Valmanovo, 90 versts (96 km or 60 miles) from Nizhny Novgorod. Misery pursued the child from his cradle, and prematurely hardened a character not naturally soft; he ran away from home to save his life from an inhumane stepmother. But he gave promise betimes of the energy and thoroughness which were to distinguish him throughout life, and contrived to teach himself reading and writing. When he was but twenty his learning and talents obtained for him a cure of souls. 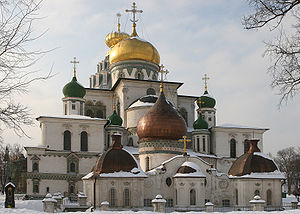 Nikon's residence at the New Jerusalem Cloister is representative of his austere aesthetic views.

His eloquence attracted attention, and, through the efforts of some Moscow merchants, he was transferred to a populous parish in the capital. Shortly afterwards, seeing in the loss of his three little children a providential warning to seek the higher life, he first persuaded his wife to take the veil and then withdrew himself first to a desolate hermitage on the isle of Anzersky on the White Sea. Having quarreled with the father superior, he attempted to flee southward, but a tempest broke out and his boat was cast ashore on Kiy Island, where he would later establish a great monastery. He eventually reached the Kozhezersky monastery, in the diocese of Novgorod, of which he became abbot in 1643.

On becoming a monk he took the name of Nikon. In his official capacity he had frequently to visit Moscow, and in 1646 made the acquaintance of the pious and impressionable Tsar Alexei I, who fell entirely under his influence. Alexius appointed Nikon archimandrite, or prior, of the wealthy Novospassky monastery at Moscow, and in 1648 metropolitan of Great Novgorod. Finally (1 August 1652) he was elected patriarch of Moscow. It was only with the utmost difficulty that Nikon could be persuaded to become the arch-pastor of the Russian Church, and he only yielded after imposing upon the whole assembly a solemn oath of obedience to him in everything concerning the dogmas, canons and observances of the Orthodox Church.

Nikon's attitude on this occasion was not affectation, but the wise determination of a would-be reformer to secure a free hand. Ecclesiastical reform was already in the air. A number of ecclesiastical dignitaries, known as the party of the protopopes (deans), had accepted the responsibility for the revision of the church service-books inaugurated by the late Patriarch Joasaph, and a few other very trivial rectifications of certain ancient observances. But they were far too timid to attempt anything really effectual. 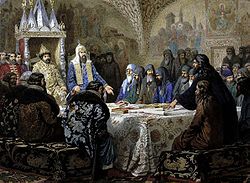 Nikon was much bolder and also much more liberal. He consulted the most learned of the Greek prelates abroad; invited them to a consultation at Moscow; and finally the scholars of Constantinople and Kiev convinced the eyes of Nikon that the Muscovite service-books were heterodox, and that the icons actually in use had very widely departed from the ancient Constantinopolitan models, being for the most part imbued with the Polish baroque influences. Later research was to vindicate the Muscovite service-books as belonging to a different recension from that which was used by the Greeks at the time of Nikon, and the unrevised Muscovite books were actually older and more venerable than the Greek books, which had undergone several revisions over the centuries and ironically, were newer and contained innovations.

Nikon at once (1654) summoned a synod to re-examine the service-books revised by the Patriarch Joasaf, and the majority of the synod decided that "the Greeks should be followed rather than our own ancients." A second council, held at Moscow in 1656, sanctioned the revision of the service-books as suggested by the first council, and anathematized the dissentient minority, which included the party of the protopopes and Paul, bishop of Kolomna. The reforms coincided with a great plague in 1654 and Russians were also greatly concerned about the upcoming year 1666 which many considered the year of the apocalypse.

Heavily weighted with the fullest ecumenical authority, Nikon's patriarchal staff descended with crushing force upon those with whom he disagreed. His scheme of reform included not only service-books and ceremonies but the use of the new-fangled icons, for which he ordered a house-to-house search to be made. His soldiers and servants were charged first to gouge out the eyes of these heretical counterfeits and then carry them through the town in derision. He also issued an ukase threatening with the severest penalties all who dared to make or use such icons in future. Construction of tent-like churches (of which Saint Basil's Cathedral is a prime example) was strictly forbidden, and many old uncanonical churches were demolished to make way for new ones, designed in the "Old Byzantine" style. This ruthlessness goes far to explain the unappeasable hatred with which the Old Believers, as they now began to be called, ever afterwards regarded Nikon and all his works. 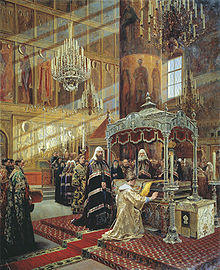 Nikon had Metropolitan Philip canonized and his relics transferred to the Moscow Kremlin as a reminder to the tsars about the crimes they had committed against the church (painting by Alexander Litovchenko).

From 1652 to 1658, Nikon was not so much the minister as the colleague of the tsar. Both in public documents and in private letters he was permitted to use the sovereign title. Such a free use did he make of his vast power, that some Russian historians[who?] have suspected him of the design of establishing a particular national papacy; and he himself certainly maintained that the spiritual was superior to the temporal power.[citation needed] He enriched the numerous and splendid monasteries which he built with valuable libraries. His emissaries scoured Muscovy and the Orient for precious Greek and Slavonic manuscripts, both sacred and profane.

But his actions raised up a whole host of enemies against him, and by the summer of 1658 they had convinced Alexius that the sovereign patriarch was eclipsing the sovereign tsar. Alexius suddenly grew cold towards his own bosom friend (as he called him).[citation needed] Nikon thereupon publicly divested himself of the patriarchal vestments and shut himself up in the Ascension Convent (19 July 1658). In February 1660 a synod was held at Moscow to elect a new Patriarch to the throne, vacant now for nearly two years. The synod decided not only that a new patriarch should be appointed, but that Nikon had forfeited both his archiepiscopal rank and his priests orders.

Against the second part of this decision, however, the great ecclesiastical expert Epifany Slavinetsky protested energetically, and ultimately the whole inquiry collapsed, the scrupulous tsar shrinking from the enforcement of the decrees of the synod for fear of committing mortal sin. For six years longer the Russian Orthodoxy remained without a patriarch. Every year the question of Nikon's deposition became more complicated and confusing. Almost every contemporary Eastern Orthodox scholar was consulted on the subject, and no two authorities agreed. At last the matter was submitted to a local council[specify], which opened its sessions on 18 November 1666 in the presence of the tsar.

On 12 December the council pronounced Nikon guilty of reviling the tsar and the whole Muscovite Church, of deposing Paul, bishop of Kolomna, contrary to the canons, and of beating and torturing his dependents. His sentence was deprivation of all his sacerdotal functions; henceforth he was to be known simply as the monk Nikon. The same day he was put into a sledge and sent as a prisoner to the far northern Ferapontov monastery. Yet the very council which had deposed him confirmed all his reforms and anathematized all who should refuse to accept them, like protopope Avvakum. Nikon survived the tsar (with whom something of the old intimacy was resumed in 1671) five years and was allowed to return to Moscow, expiring on his way there, after crossing the Kotorosl River in Tropino on 17 August 1681.