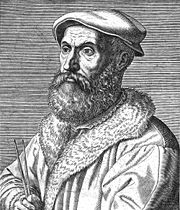 Niccolò Fontana Tartaglia (1499/1500, Brescia – 13 December 1557, Venice) was a mathematician, an engineer (designing fortifications), a surveyor (of topography, seeking the best means of defense or offense) and a bookkeeper from the then-Republic of Venice (now part of Italy). He published many books, including the first Italian translations of Archimedes and Euclid, and an acclaimed compilation of mathematics. Tartaglia was the first to apply mathematics to the investigation of the paths of cannonballs; his work was later validated by Galileo's studies on falling bodies. He also published a treatise on retrieving sunken ships.

Niccolò Fontana was the son of Michele Fontana, a rider and deliverer. In 1505, Michele was murdered and Niccolo, his two siblings, and his mother were impoverished. Niccolò experienced further tragedy in 1512 when the French invaded Brescia during the War of the League of Cambrai. The militia of Brescia defended their city for seven days. When the French finally broke through, they took their revenge by massacring the inhabitants of Brescia. By the end of battle, over 45,000 residents were killed. During the massacre, a French soldier sliced Niccolò's jaw and palate with a saber. This made it impossible for Niccolò to speak normally, prompting the nickname "Tartaglia" ("stammerer").

There is a story that Tartaglia learned only half the alphabet from a private tutor before funds ran out, and he had to learn the rest for himself. Be that as it may, he was essentially self-taught. He and his contemporaries, working outside the academies, were responsible for the spread of classic works in modern languages among the educated middle class.

His edition of Euclid in 1543, the first translation of the Elements into any modern European language, was especially significant. For two centuries Euclid had been taught from two Latin translations taken from an Arabic source; these contained errors in Book V, the Eudoxian theory of proportion, which rendered it unusable. Tartaglia's edition was based on Zamberti's Latin translation of an uncorrupted Greek text, and rendered Book V correctly. He also wrote the first modern and useful commentary on the theory. Later, the theory was an essential tool for Galileo, just as it had been for Archimedes.

Tartaglia is perhaps best known today for his conflicts with Gerolamo Cardano. Cardano cajoled Tartaglia into revealing his solution to the cubic equations, by promising not to publish them. Several years later, Cardano happened to see unpublished work by Scipione del Ferro who independently came up with the same solution as Tartaglia. As the unpublished work was dated before Tartaglia's, Cardano decided his promise could be broken and included Tartaglia's solution in his next publication. Even though Cardano credited his discovery, Tartaglia was extremely upset. He responded by publicly insulting Cardano.

Volume of a tetrahedron

Tartaglia is also known for having given an expression (Tartaglia's formula) for the volume of a tetrahedron (incl. any irregular tetrahedra) as the Cayley–Menger determinant of the distance values measured pairwise between its four corners:

where d ij is the distance between vertices i and j. This is a generalization of Heron's formula for the area of a triangle.