The North Sea Canal (Dutch: Noordzeekanaal) is a Dutch ship canal from Amsterdam to the North Sea at IJmuiden, constructed between 1865 and 1876 to enable seafaring vessels to reach the port of Amsterdam.[1] This man-made channel terminates at Amsterdam in the closed-off IJ Bay, which in turn connects to the Amsterdam-Rhine Canal.

The drainage of the canal to the North Sea is done through the Spui Locks at IJmuiden, augmented by the largest pumping station in Europe. This system is vital to the groundwater management of the western Netherlands.

To improve the connection between the harbour of Amsterdam and the North Sea, the North Holland Canal was built in 1824. But this long and narrow canal was quickly inadequate to handle the growing boat traffic. A few decades later it was decided to dig a new canal at the narrowest point in Holland and thereby providing the shortest route to the sea.

Digging began on 8 March 1865, at the dunes of Breesaap and lasted until 1876. Since no Dutch company was willing to take on this task, the project was awarded to an English contractor.[citation needed]

The North Sea Canal was built by digging a channel through the old IJ Bay and lining it with dikes, after which the remaining portions of the IJ Bay were reclaimed and turned into polders. From this bay to the sea, a new canal was dug through the dunes at Velsen. To accommodate drainage of and shipping on the tributaries of the IJ, such as the Spaarne, the Zaan, and the Nauerna Canal, nine auxiliary canals needed to be dug as well (Side Canals "A" to "I").

A small set of locks (Zuidersluis) were built at the mouth in 1876 where the new town of IJmuiden (Dutch for "IJ Mouth") formed. In 1896 the Middle Locks (Middensluis) were built, followed by the North Locks (Noordersluis) in 1929, which were Europe's largest locks at that time.

Historic map of Velsen showing the western portion of the IJ and the planned route of the canal.

At the eastern end of the canal, east of Amsterdam, the IJ Bay was open to the Zuiderzee until 1872 when the Orange Locks (Oranjesluizen) were built. With the completion of these locks the North Sea Canal and IJ Bay were no longer open to the sea and a specific water level could be maintained.

The canal was dug using manual labour. The workers lived in horrid conditions, being housed in huts built from twigs, driftwood, sod, and straw, where disease, fights, and alcohol abuse were rampant. [2]

On 1 November 1876, the North Sea Canal was officially opened by King William III of the Netherlands. Over the years the canal has been widened and deepened several times.

The North Sea Canal and the IJ have 10 side canals (in Dutch: Zijkanaal), which connect to rivers and other canals which used to flow into the former IJ Bay before its reclamation. 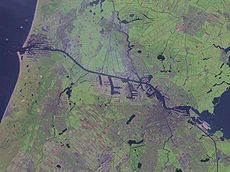 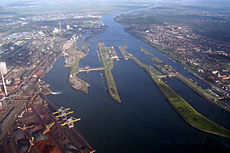 Mouth and locks at the North Sea. 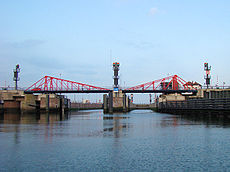 Entrance to the South Locks from sea. Being the oldest locks in the complex, they are now the main passage for recreational vessels and smaller inland ships.

There are four locks, of various sizes at the North Sea mouth of the canal: [3] When the north canal lock was opened in 1929 it was the largest canal lock in the world. [4]

Railway tunnels (with nearest train station on the south and north bank):

Road tunnels, from east to west:

The most western crossing is the road over the locks. The route depends on which of the locks is closed.

Several ferries. In Amsterdam there are several across the IJ; at least one is frequent, operating 24 hours a day, free of charge.