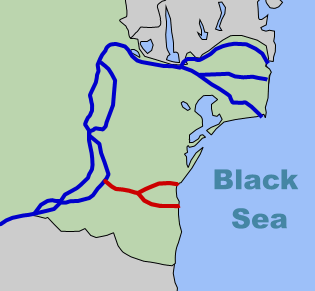 The Danube-Black Sea Canal ( _ro. Canalul Dunăre-Marea Neagră) is a in which runs from on the to (southern arm) and (northern arm) on the . Administrated from Agigea, it is an important part of the an canal system that links the to the Black Sea.

The Canal was notorious as the site of s in 1950s , when, at any given time, several tens of thousands worked on its excavation. The total number of people used as a workforce for the entire period is unknown, as is the number of people who died in the construction. Work was completed in 1984-1987, more than three decades after camps were disestablished.

The course of the canal follows the course of the former Carasu River. Therefore, hydrographically also has the function of conveying the runoff from a 1031 sq. km. drainage basin to the Black Sea.

The main branch extends from on the to Poarta Albă. On this reach it crosses the localities of , Ştefan cel Mare, Saligny, Mircea Vodă, , Castelu, , On this reach the canal is joined on the left bank by tributaries: Valea Plantaţiei, Valea Cişmelei, Agi Cabul, Castelu and Nisipari. On the left side it is joined by tributaries: Popa Nica, Medgidia, Siminoc and Şerplea

At Poarta Albă the canal bifurcates into two branches.

* The Northern Branch, also called Carasu Branch goes to . It crosses the localities of . On its reach it is joined by tributaries Nazarcea and Valea Adâncă, both from the left bank.

* The Southern Branch, also called Agigea Branch goes to . It crosses the localities of . On its reach it is joined on the left bank by tributaries Cocoş, Valea Seacă, Potârnichea, Lazu and on the right bank by the Agigea

The main reasons for the building of the canal were to circumvent the , which is difficult to navigate, to shorten the distance to the Black Sea, and several issues related to the loading and unloading of ships.

In its delta, the Danube is divided into three main branches, none of which is suited to optimal navigation: is the deepest, but its mouths were not stable, which made navigation dangerous; is not deep enough for maritime ships to navigate on it and it also used to be isolated from the railroad system; is shallow and sinuous.

At the time when decision to build the canal was taken, it was officially announced that works would also serve a secondary purpose, that of &mdash; with the drainage of es in the area. Also during the period, the Danube-Black Sea Canal was advertised as a fast and direct connection between the Soviet and .

In its final phase, the canal took over nine years to construct; 300 million m³ of soil were excavated (greater than the amount involved in building the Panama and Suez canals),

The earliest plans for building this canal were created ca. 1840-1845 (when the vision of Scottish diplomat possibly inspired the n scholar ).

In 1927, the Romanian engineer drafted a new set of plans; because of the , , and political turmoil in Romania ("see "), construction did not begin until 1949, after the establishment of a Romanian Communist regime.

Creation of the camps

The decision to build the Danube-Black Sea Canal was taken on May 25, 1949 by the of the Romanian Workers' Party and the executive.

"in accordance with art [icle] 72 of the Constitution of the People's Republic of Romania, the Council of Ministers decides: art [icle] 1 &mdash; preparatory work on the Danube-Black Sea Canal to begin."

A version of events, supported on one occasion by the Romanian leader and made popular through the literary works of , credited Soviet ruler with the idea for the Canal &mdash; a project which was supposedly based on the [Tismăneanu, p.139] (Communist leader , who, like her collaborator , opposed the project, told her family that Stalin personally "proposed" the Canal in late 1948).

In October 1949, the authorities established a General Directorate to oversee both the works and the penal facilities, answering directly to the national leadership. Its first head was the engineer , replaced in 1951 by , in turn replaced by (who held the position in 1952-1953). According to historian , all three were insufficiently trained for the task they were required to accomplish. By 1952, the Directorate came under the direct supervision of the Internal Affairs Ministry, and the was allowed direct intervention on the construction site.

Prison camps sprang up all along the projected canal route in the summer of 1949 and were quickly filled with political prisoners brought from jails from throughout the country. These first arrivals were soon joined by newly arrested people who were sent to the canal in ever increasing numbers. By 1950 the forced set up along the length of the planned canal were filled to capacity; that year alone, 40,000 prisoners were held in those camps.

"At the time, an estimated 1 million Romanians were imprisoned in dire conditions or engaged in often deadly slave labor, digging out the Danube-Black Sea Canal."

The construction effort surpassed the resources available to the Romanian economy in the 1950s. The canal was assigned inferior machinery, part of which had already been used on the Soviet , and building had to rely on primitive techniques (most work appears to have been carried out using s and s, which was especially hard in the rocky terrain of ). Detainees were allocated to brigades, usually run by common criminals &mdash; encouraged to use violence against their subordinates. In parallel, the region's , destined to assist in the building effort, was never accomplished.

Sums allocated for prisoner health, hygiene and nutrition declined dramatically over the years. Food rations were kept to a minimum, and prisoners would often resort to hunting mice and other small animals, or even consuming grass in an attempt to supplement their diet.

The prisoners comprised dispossessed farmers who had attempted to resist , former activists of the , the National Liberal Party, the Romanian Social Democratic Party, and the fascist , Zionist Jews, as well as Orthodox and Catholic priests.

One estimate places at over 200,000 the number of people who died as a result of exposure, unsafe equipment, , accidents, and other diseases, over-work, etc., of those working on the project between 1949 to 1953.

In parallel, authorities left aside sectors of employment for skilled workers &mdash; kept in strict isolation from all others, they were attracted to the site with exceptional salaries (over 5,000 lei per month), as well as for young people drafted in the and whose files indicated "unhealthy origins" (a family background). Their numbers fluctuated greatly (regular employees went from 13,200 in 1950 to 15,000 in 1951, to as little as 7,000 in early 1952, and again to 12,500 later in that year). At the same time, facilities meant to accommodate the projected influx of labor (including homes available on credit) were never actually completed. This was overlooked by the machine, which instead furnished stories, according to which work quotas were surpassed by as much as 170%. Authorities also made the claim that the construction site was offering training to previously unskilled workers (as many as 10,000 in one official communiqué).

Blame for the debilitating and unsuccessful works was eventually placed on a group of alleged conspirators, who were indicted in a (late 1952) &mdash; they faced various trumped-up charges (, , , and the of Zionism), in connection with a review of policies following Gheorghiu-Dej's maneuver against . The inquiry was orchestrated by .

Three people were executed (the engine driver , and the engineers and ); others were imprisoned for various terms. Defendants in a second group, around the engineer , were sentenced to various harsh penalties (including three s). Torture was applied by a squad led by , as a means to obtain s.

On July 18, 1953, the project came to a discreet halt, all work being suspended for another 23 years [Tismăneanu, p.139, 300] (according to some sources, the closure had been ordered by Stalin himself, as early as 1952). The canal camps remained in existence for another year, and their prisoners progressively relocated, to similar conditions at other work sites in . Penal facilities on the canal site were shut down in mid-1954.

In 1976, the project was restarted by , who had previously ordered the rehabilitation of people sentenced in the 1952 trial, and who aimed to withdraw the Lower Danube from Soviet control (which had been consecrated by the 1948 ). In official , where the 1950s precedent was no longer mentioned, the canal was referred to as the "Blue Highway" ("Magistrala Albastră"). New and large machinery, produced inside Romania, was introduced to the site. The southern arm was completed in 1984 (delayed by poor quality in construction), with the northern arm being inaugurated in 1987.

The cost of building the canal is estimated to be around 2 billion s, and was supposed to be recovered in 50 years. However, as of 2005, it has a yearly profit of only a little over 3 million s. [ [http://www.hotnews.ro/articol_23177-Canalul-Dunare-Marea-Neagra-isi-va-scoate-banii-in-633-de-ani.htm Marian Cosor, "Canalul Dunăre-Marea Neagră îşi va scoate banii în 633 de ani" ("The Danube-Black Sea Canal Will Absorb Its Construction Cost in 633 Years")] , on Radio Constanţa, May 26, 2005]

For much of the 1950s, the Danube-Black Sea Canal was celebrated in literature (notably, in 's 1950 reportage "Începutul epopeii", "The Beginning of the Epic", and in 's "", "Dustless Road"), music ('s "Dunărea se varsă în mare", "The Danube Flows to the Sea"), and film ('s 1951 "Canalul Dunăre-Marea Neagră, o construcţie a păcii" - "The Danube-Black Sea Canal, a Construction of Peace"). During the 1980s, the song "Magistrala Albastră", performed by and and using the Canal as its setting, was frequently broadcast in official and semi-official contexts.

During the period of preceding the "", literature was allowed to make several references to the Canal's penitentiary history. Examples include 's "" and, most likely, 's "Principele" (by means of an , set during the 18th century Phanariote rules).

Inmates of the labor camps