Dyirbal (also Djirubal) is an Australian Aboriginal language spoken in northeast Queensland by about 5 speakers of the Dyirbal tribe.[citation needed] It is a member of the small Dyirbalic branch of the Pama–Nyungan family. It possesses many outstanding features that have made it well known among linguists.

In the years since the definitive Dyirbal grammar was published in 1972, the language has grown steadily closer to death as younger community members fail to learn their language.[1] 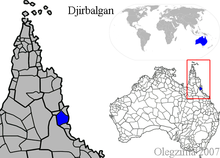 Dyirbal actually has only four places of articulation for the stop and nasal consonants—this is fewer than most other Australian Aboriginal languages, which have six. This is because Dyirbal lacks the dental/alveolar split typically found in these languages. Like the majority of Australian languages, it does not make a distinction between voiced consonants (such as b, d, g, etc.) and voiceless consonants (the corresponding p, t, and k, etc. respectively). Like Pinyin, standard Dyirbal orthography uses voiced consonants, which seem to be preferred by speakers of most Australian languages since the sounds (which can often be semi-voiced) are closer to English semi-voiced b, d, g than aspirated p, t, k.

The Dyirbal vowel system is typical of Australia, with three vowels: /i/, /a/ and /u/, though /u/ is realised as [o] in certain environments and /a/ can be realised as [e], also depending on the environment in which the phoneme appears. Thus the actual inventory of sounds is greater than the inventory of phonemes would suggest. Stress always falls on the first syllable of a word and usually on subsequent odd-numbered syllables except the ultima, which is always unstressed. The result of this is that consecutive stressed syllables do not occur.

The language is best known for its system of noun classes, numbering four in total. They tend to be divided among the following semantic lines:

The class usually labelled "feminine" (II), for instance, includes the word for fire and nouns relating to fire, as well as all dangerous creatures and phenomena. This inspired the title of George Lakoff's book Women, Fire and Dangerous Things. Some linguists distinguish between such systems of classification and the gendered division of items into the categories of "feminine", "masculine" and (sometimes) "neuter" that is found in, for example, many Indo-European languages.

Dyirbal shows a split-ergative system. Sentences with a first or second person pronoun have their verb arguments marked for case in a pattern that mimics nominative–accusative languages. That is, the first or second person pronoun appears in the least marked case when it is the subject (regardless of the transitivity of the verb), and in the most marked case when it is the direct object. Thus Dyirbal is morphologically accusative in the first and second persons, but morphologically ergative elsewhere; and it is still always syntactically ergative.

There used to be in place a highly complex taboo system in Dyirbal culture. A speaker was completely forbidden from speaking with his/her mother-in-law, child-in-law, father's sister's child or mother's brother's child, and from approaching or looking directly at these people[citation needed]. In addition, when within hearing range of taboo relatives a person was required to use a specialised and complex form of the language with essentially the same phonemes and grammar, but with a lexicon that shared no words with the non-taboo language. This phenomenon, commonly called mother-in-law languages, was common in indigenous Australian languages. It existed until about 1930 when the taboo system fell out of use.