Robert Ford (outlaw)
This article is about an American outlaw. For other people named Robert Ford, see Robert Ford (disambiguation).

Robert Newton "Bob" Ford (January 31, 1862 – June 8, 1892) was an American outlaw best known for killing his gang leader Jesse James in 1882. Ford was shot to death by Edward O'Kelley in his tent saloon with a shotgun blast to the front upper body.[1] He was buried in Creede and later reburied at Richmond Cemetery in Ray County, with "The man who shot Jesse James" inscribed on his grave marker.[2]

Robert Ford was born in Ray County, Missouri, to James Thomas Ford and his wife Mary Bruin. As a young man, he became an admirer of Jesse James for his war record and his celebrated criminal exploits. In 1880, he finally met James. Ford's brother Charles is believed to have taken part in the James gang's Blue Cut train robbery[3] in Jackson County near Glendale, Missouri (now part of Independence), on September 7, 1881.[4]

In November 1881, James moved his family to St. Joseph, Missouri. He intended to give up crime but first wanted to stage one last robbery at Blue Cut, Missouri. The James gang had been greatly reduced in numbers by that time. Some had fled the gang in fear of prosecution, and many of the original members were either dead or in prison after a botched robbery in Northfield, Minnesota. After the train robbery, Frank James decided to retire from crime, settling in Lynchburg, Virginia.[5]

By the spring of 1882, with his gang depleted by arrests, deaths, and defections, James thought that he could only trust the Ford brothers.[6] Charles had been out on raids with James before, but Bob was an eager new recruit. The Fords resided in St. Joseph with the James family, where Jesse went by the alias of Thomas Howard. The Ford brothers passed themselves off as Bob and Charles Johnson, Howard's cousins.[citation needed]

Hoping to keep the gang alive, James invited the Fords to take part in the robbery of the Platte City Bank, but the brothers had already decided not to take part in the robbery in order to collect the $10,000 bounty placed on James by Missouri Governor Thomas T. Crittenden. Robert Ford had been brought into a meeting with Crittenden for being in the presence of Jesse James' cousin Wood Hite the day Hite was murdered. As a result, Crittenden promised Ford a full pardon if he would also kill Jesse James,[citation needed] who was by then the most wanted criminal in America. Crittenden had made capture of the James brothers his top priority; in his inaugural address he declared that no political motives could be allowed to keep them from justice. Barred by law from offering a sufficiently large reward, he had turned to the railroad and express corporations to put up a $5,000 bounty for each of them. President Ulysses S. Grant had also wanted James to be captured.[7]

Jesse James's home in St. Joseph, where he was shot

On April 3, 1882, after eating breakfast, the Fords and James went into the living room in preparation for the trip to Platte City. James had just learned of gang member Dick Liddil's confession for participating in Hite's murder while reading the daily newspaper, and grew increasingly suspicious of the Fords for never reporting this matter to him. According to Robert Ford, it became clear to him that James had realized they were there to betray him. However, instead of scolding the Fords, James walked across the living room to lay his revolvers on a sofa. He then turned around and noticed a dusty picture above the mantle, and stood on a chair in order to clean it. Robert Ford then drew his weapon, and shot the unarmed Jesse James in the back of the head.[8][9] James' wife Zerelda Mimms ran into the room and screamed, "You've killed him." Robert Ford's immediate response was, "I swear to God I didn't." After the assassination, the Fords wired Crittenden to claim their reward. They turned themselves in to the law, but they were dismayed to find that they were charged with first degree murder. In one day, the Ford brothers were indicted, pleaded guilty, and sentenced to death by hanging, but two hours later, Crittenden granted them a full pardon.[10] Despite the deal that was made with Crittenden, the Ford brothers received only a fraction of the money they were originally promised.[11]

Bob Ford earned his living by posing for photographs as "the man who killed Jesse James" in dime museums.[12] He also appeared on stage with his brother Charles, reenacting the murder in a touring stage show,[7] but his performance was not well received. Charles, terminally ill with tuberculosis and addicted to morphine, committed suicide on May 4, 1884.[13] Soon afterward, Bob Ford and Dick Liddil relocated to Las Vegas, New Mexico where they opened a saloon.[14] By early 1885, Bob Ford had become a Las Vegas city policeman.[citation needed] According to legend, Ford, unpopular with his constituents, was eventually goaded into a shooting contest with Jose Chavez y Chavez, a comrade-in-arms of Billy the Kid during the Lincoln County War. Ford shot at and missed a coin on a signpost, while Chavez hit his target. Ford claimed the match had been unfair, and Chavez promptly challenged him to a duel. Ford declined and immediately left town.[15]

On December 26, 1889, Ford survived an assassination attempt in Kansas City, Kansas when an assailant tried to slit his throat.[16]

Within a few years, Robert Ford had settled in Colorado, where he opened a saloon-gambling house in Walsenberg. When silver was found in Creede, Ford closed his saloon and opened one there.[17]

On the eve of Easter 1892, Ford and gunman Joe Palmer, a member of the Soapy Smith gang, were drinking in the local saloons and proceeded to shoot out windows and street lamps along Creede's Main Street. With the help of friends and business partners of Smith, they were soon allowed to return. Ford purchased a lot and on May 29, 1892, opened Ford's Exchange, said to have been a dance hall.[18] Six days later, the entire business district, including Ford's Exchange, burned to the ground in a major fire. Ford opened a tent saloon until he could rebuild. 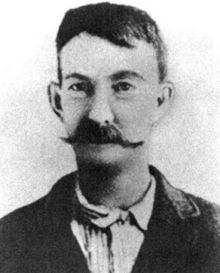 Three days after the fire, on June 8, 1892, Edward O'Kelley entered Ford's tent saloon with a shotgun. According to witnesses, Ford's back was turned. O'Kelley said, "Hello, Bob." As Ford turned to see who it was, O'Kelley fired both barrels, killing Ford instantly. O'Kelley became "the man who killed the man who killed Jesse James." O'Kelley's sentence was commuted because of a medical condition, and he was released on October 3, 1902.[1] O'Kelley was killed on January 13, 1904 while trying to shoot a policeman.

Ford was buried in Creede, but later was exhumed and reburied in Richmond, Ray County, Missouri, at Richmond Cemetery.[2]