Conwy Castle (Medieval English: Conway Castle; Welsh: Castell Conwy) is a castle in Conwy, on the north coast of Wales. It was built between 1283 and 1289 [1] during King Edward I's second campaign in North Wales.

Conwy replaced Deganwy Castle, an earlier stronghold built by Henry III that had been destroyed by Llywelyn the Last in 1263.

The defences are in a linear arrangement because, like Caernarfon Castle, it was built on a rock promontory.[3] This was to prevent undermining and also guard the entrance to the River Conwy. The promontory, which is about 15 metres (49 ft) high, was originally surrounded by the river on two sides. With the advent of the North Wales Coast railway in the 19th century, land reclamation around the castle has isolated it from the river. 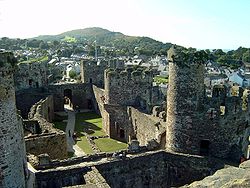 The outer ward of Conway Castle.

The castle was designed to have an outer and inner ward. Each ward was protected by four towers more than 70 feet (21 m) high, 30 feet (9.1 m) in diameter and consisting of several floors. The inner ward's towers also had the additional defence of archers' turrets.

Access to the castle was originally up a stepped ramp - of which, a small part remains - across a drawbridge, through a gateway with portcullis and into the barbican. Entrants then turned left through the main gateway into the outer ward. This housed the main living quarters for the garrison and the prison tower.

The inner ward was separated from the rest of the castle by a 15 feet (4.6 m) thick wall with enfilading arrow slits. It also had a deep rock gully and an indirect gateway. In the event of attack, these measures would create a lethal bottleneck because the inner ward gateway was positioned at a right-hand turn to the wall. The extra defence was reflected in the inner ward's status. It contained Edward I's heated Royal Apartments and the castle's Great Hall. At the rear of the fortress, another barbican guarded the postern entrance from the River Conwy.

In the 13th century, a watchtower was built on the site of Bodysgallen Hall. Its purpose was to act as a lookout towards the north an area not easily watched from Conwy itself. Some of the stone used in construction of Conwy Castle has been linked to a quarry at Bodysgallen.[citation needed]

Construction at Conwy ceased in 1289. Six years later Edward I was besieged here during the rebellion of Madog ap Llywelyn. The siege lasted for several months and supplies ran low. However the castle and town were not captured. In the 14th century alterations were carried out under Edward, the Black Prince. 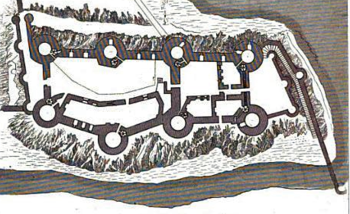 On 12 August 1399, after returning from Ireland, the unpopular king Richard II made his way to Conwy Castle where he met the Earl of Northumberland for negotiations to give up his crown.[4] A week later he surrendered to Henry Bolingbroke at Flint Castle promising to abdicate if his life was spared.[5] Richard II was briefly imprisoned in the Tower of London, and then transferred to Pontefract Castle, where he died in February 1400.

In 1403 Welsh forces led by Rhys ap Tudur and his brother Gwilym, sons of Tudur ap Gronw, and the cousins of Owain Glyndwr, captured the castle and its English garrison. The fortress and the soldiers were later ransomed back to Henry IV. Tudur ap Gronw was the forefather of Henry Tudor. During the War of the Roses Conwy was taken by William Herbert, Earl of Pembroke under orders from Edward IV in 1461.

But by the early 17th century, the once great Royal Castle had become dilapidated and was largely unused. However at the outbreak of the English Civil War Conwy was again garrisoned for the King. It was captured after a three-month siege by the Parliamentary army in 1646. It was slighted and left as an empty shell.

Later the restored Charles II granted Conwy Castle to Edward Conway, 3rd Viscount Conway. In 1665 the remaining timber, iron and lead was removed from the castle by William Milward on behalf of the peer and sold.[6]

The castle is a Scheduled Ancient Monument and managed by Cadw. It is also part of the World Heritage Site entitled Castles and Town Walls of King Edward in Gwynedd.