Make (or MAKE) is an American quarterly magazine published by[1] O'Reilly Media which focuses on do it yourself (DIY) and/or DIWO (Do It With Others) projects involving computers, electronics, robotics, metalworking, woodworking and other disciplines. The magazine is marketed to people who enjoy making things and features complex projects which can often be completed with cheap materials, including household items.

Its first issue was released in January 2005, and, as of July 2011, 27 issues have been published. The magazine is subtitled "technology on your time" It is also available as an e-zine and Texterity digital edition on the Web, on subscription or free of charge to existing magazine subscribers. The HTML-based e-zine allows for searching and includes additional content such as videos, with freely accessible blogs, podcasts and forums also available in the website. The e-zine also allows limited sharing of articles with friends.

The Primer section is a frequent feature teaching skills in areas as diverse as welding, electronics and moldmaking. Another frequent feature is the MakeShift competition, which presents a situation where someone has to confront a life-threatening situation with limited equipment.

Make's founder and publisher is O'Reilly co-founder Dale Dougherty; the editor-in-chief is blogger and journalist Mark Frauenfelder, and the director of digital media is Shawn Connally. The magazine also has an eight-strong technical advisory board, including Gareth Branwyn.

For more details on this topic, see Maker Faire.

Makers (subtitled "All Kinds of People Making Amazing Things in Backyards, Garages, and Basements") is a spin-off hardback book. Based on the magazine section of the same name, it covers DIY projects and profiles their creators.[2]

In October 2006, a spin-off magazine, Craft, was created for art and craft activities, allowing Make to concentrate exclusively on technology and DIY projects. On 11 February 2009, e-mails were sent to Craft: subscribers explaining that due to rising production costs and shrinking ad markets, the print version of Craft: would be discontinued but would remain as an online presence. Also, all further printed content would be incorporated into Make:.[3]

Make: television is a television show produced by Twin Cities Public Television and hosted by John Edgar Park[4] which premiered in January 2009 on PBS stations[5]. The show features projects and informational guides as well as user produced videos which can be submitted online.[6]

Makezine teamed up with MakingThings, LLC, to produce the Make Controller Kit, an open source hardware solution for hobbyists and professionals to create interactive applications. It supports desktop interfaces via a variety of languages such as Max/MSP, Flash, Processing, Java, Python, Ruby, or anything that supports Open Sound Control.[7]

Possibilities includes the ability to plug in XBee modules for wireless communication capability. Xbee modules add the power of IEEE 802.15.4 network standard and Zigbee protocol to a MAKE Controller. 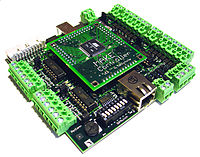