Processing is an open source programming language and integrated development environment (IDE) built for the electronic arts and visual design communities with the purpose of teaching the basics of computer programming in a visual context, and to serve as the foundation for electronic sketchbooks. The project was initiated in 2001 by Casey Reas and Benjamin Fry, both formerly of the Aesthetics and Computation Group at the MIT Media Lab. One of the stated aims of Processing is to act as a tool to get non-programmers started with programming, through the instant gratification of visual feedback. The language builds on the Java programming language, but uses a simplified syntax and graphics programming model. 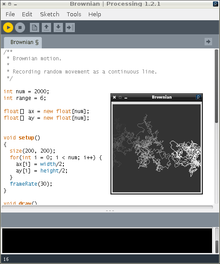 Processing includes a "sketchbook", a minimal alternative to an integrated development environment (IDE) for organizing projects.

Every Processing sketch is actually a subclass of the PApplet Java-class which implements most of the Processing language's features.

When programming in Processing, all additional classes defined will be treated as inner classes when the code is translated into pure Java before compiling. This means that the use of static variables and methods in classes is prohibited unless you explicitly tell Processing that you want to code in pure Java mode.

While the Java-like command

is a valid Hello World program in Processing, the following code is a better example of the look and feel of the language.

Output of the following example

The next example shows a map of the results of the 2008 USA presidential election. Blue denotes states won by Barack Obama, and red denotes those won by John McCain. (Note: this map does not show the Nebraska district in which Obama won an elector.)

Processing was based on the original work done on Design By Numbers project in MIT. It shares many of the same ideas and is a direct child of that experiment.

Processing has spawned another project, Wiring, which uses the Processing IDE together with a simplified version of the C++ programming language as a way to teach artists how to program microcontrollers. There are now two separate hardware projects, Wiring and Arduino, using the Wiring environment and language. Fritzing is another software environment of the same sort, which helps designers and artists to document their interactive prototypes and to take the step from physical prototyping to actual product.

In 2008, John Resig ported Processing to JavaScript using the Canvas element for rendering,[1] allowing Processing to be used in modern web browsers without the need for a Java plugin. Since then, the open source community including students at Seneca College have taken over the project.

Spde (standing for Scala Processing Development Environment) replaces Processing's reduced Java syntax and custom preprocessor with the off-the-shelf Scala language which also runs on the Java platform and enforces some of the same restrictions such as disallowing statics, while also allowing more concise code, and supporting functional programming.[2][3][4][5]

clj-processing is a wrapper for Processing in the Clojure language, a Lisp that runs on the Java platform.[6][7]

Processing Monsters is a project by Lukas Vojir intended to help people learn the language in an entertaining fashion. The "monsters" are simple graphical programs that are only black and white and are mouse reactive. As of May 3, 2010, there are 70 monsters featured on Vojir's site.[8]

In 2005 Reas and Fry won the prestigious Golden Nica award from Ars Electronica in its Net Vision category for their work on Processing.

"Drawing on a background in graphic design and computer science, Ben Fry pursues a long-held fascination with visualizing data. As Principal of Fathom Information Design in Boston, Fry develops software, printed works, installations, and books that depict and explain topics from the human genome to baseball salaries to the evolution of text documents. With Casey Reas, he founded the Processing Project, an open-source programming environment for teaching computational design and sketching interactive-media software. It provides artists and designers with accessible means of working with code while encouraging engineers and computer scientists to think about design concepts."

The IDE is licensed under the GNU General Public License.

Processing's 'core' libraries, the code included in exported applications and applets, is licensed under the GNU Lesser General Public License, allowing the programmer to release their original code with their license of choice.

Originally, Processing had the URL at proce55ing.org, because the "processing" domain was taken. Eventually, however, Reas and Fry acquired the domain. Although the name had a combination of letters and numbers, it was still pronounced "processing". They do not prefer the environment being referred to as "Proce55ing." But, despite the name change, Processing still uses the term "p5" sometimes as a shortened name. However, they specifically use "p5" and not "p55".