The Red Chord is an American grindcore band from Revere, Massachusetts, formed in 1999. The band is made up of vocalist Guy Kozowyk, guitarist Mike "Gunface" McKenzie, and bassist Greg Weeks. The band gained a fanbase with its 2002 debut album Fused Together in Revolving Doors. The second album, Clients, was released in 2005 and sold over 50,000 copies in the U.S. They released their third album, Prey for Eyes in 2007, which sold in between 4,000 and 5,000 copies and debuted at No. 198 on the Billboard 200 chart. Their latest album, 2009's Fed Through the Teeth Machine, debuted at No. 180 on the Billboard 200 chart.

Formation, Fused Together in Revolving Doors and Clients (1999-2006)

The Red Chord was formed in Revere, Massachusetts in 1999 by vocalist Guy Kozowyk and guitarist Kevin Rampelberg. One year later, the band was joined by second guitarist Mike "Gunface" McKenzie, bassist Adam Wentworth and drummer Mike Justian.[2] The band's name is derived from Alban Berg's opera Wozzeck, in which a schizophrenic man slits his lover's throat, then reverts to his normal self and asks, "My love, what is that red cord across your neck?"[3] The debut album Fused Together in Revolving Doors was recorded with producer Andrew Schneider in December 2001 and released by the Robotic Empire record label.[2] With the debut album, The Red Chord gained a substantial fanbase.[4]

In early 2004, Wentworth and Justian announced their withdrawal from The Red Chord and the band found replacements in bassist Gregory Weeks and drummer Jon Dow. In April that year, The Red Chord toured with Six Feet Under and others. The debut album was re-released with demo tracks, a full concert performance and the video clip for "Dreaming In Dog Years". In March, the band signed to Metal Blade. John Longstreth replaced Dow in May but exited in September. The Red Chord entered Planet Z Studios in Hadley, Massachusetts on November 1, with Brad Fickeisen as a new drummer, and recorded their second album Clients,[2][4] which subsequently sold over 50,000 copies in the US.[5]

2005 started with American tours and resumed on European tours in December. The band filmed a promotional video for the track "Antman" with director Dave Brodsky. The tour continued in North America through February 2006 until Ozzfest in June.[2][4]

Prey for Eyes and Fed Through the Teeth Machine (2007-present) 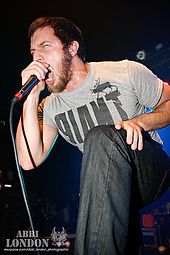 In February 2007, guitarist Jonny Fay decided to quit the band[6] and was replaced by Mike Keller. In May 2007, the band went on another tour to Europe. The third album, Prey for Eyes, was released on July 24.[2][4] The group parted ways with Keller in early September and decided not to replace him.[2]

The band's fourth album, Fed Through the Teeth Machine, was recorded in early to mid-2009 in Milford, New Hampshire, at Backyard Studios, which is owned by the band's former guitarist Jonny Fay.[7] The album was released on October 27, 2009.[8] Kozowyk says the new songs are more intense and mature than those the previous album. "It's faster and heavier, but it's definitely groove-oriented and melodic where it needs to be," he commented.[9] Fed Through the Teeth Machine sold around 2,700 copies in the United States in its first week of release and debuted at No. 180 on the Billboard 200 chart.[10][11]

In 2010, the release was followed by a headlining tour in the U.S.[12] Due to a volcano eruption on Iceland, The Red Chord was forced to miss a co-headlining European "Machines Of Grind" tour with Aborted and Rotten Sound,[13] who subsequently embarked on a "DIY Fuck The Volcano" tour without The Red Chord.[14] The band later performed in Japan with Between the Buried and Me.[15] Drummer Michael Justian rejoined the band in February 2010, shortly after Fickeisen departed.[16] Fickeisen commented his departure: "There is no easy way to go about leaving a busy band with plans in constant motion, but a little abruptly, I chose to depart from manning the kit for The Red Chord. I have had a great time for the past five years with these guys, and wouldn't exchange it for anything. Touring is tough; everyone who's done it knows that. (...) I want to thank Greg, Guy, and Mike, and wish them the best of luck in the future."[17] A music video for "Demoralizer", that was filmed in late 2009, was released in mid-February.[18]

Justian departed from The Red Chord in March 2011 and the band hired Jon "The Charn" Rice of Job for a Cowboy for the forthcoming tour.[19]

The majority of The Red Chord's music is composed by McKenzie and to a lesser degree by Weeks and other band members. The lyrics are written by Kozowyk.[20] The band's grindcore[20][21] and deathgrind-based sound[22] also incorporates elements of death metal,[4][21][23] metalcore and hardcore punk,[21][22][23] and is typically experimental.[22] The band helped popularize the "deathcore" genre.[1][24] The Red Chord typically uses frequent tempo changes,[23] technically proficient instrumental approach[22] and emphasizes the element of groove in their music.[25][26] The vocal style of Kozowyk uses deathgrind guttural growls with occasional spoken word[26] and is rather decipherable.[21] Kozowyk points out Frank Mullen from Suffocation as a vocal influence, Black Sabbath as a musical influence,[5] and Faith No More as a lyrical inspiration.[24]