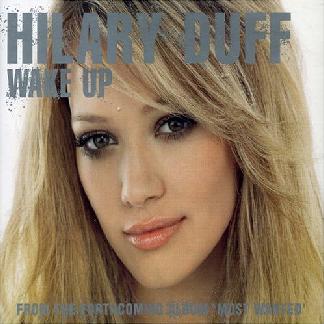 According to Duff, the song "makes you want to forget about all the pressure of dealing with your boss, or your teacher, or your mom, or [whoever] . It's about getting out and not forgetting to have some fun."

Bill Lamb of hailed it as the "pop anthem of summer 2005" and that "the singalong chorus is nearly perfect and a great one to share with friends". He gave it a 4.5 star rating, commenting that it is a perfect beach pop anthem. [Lamb, Bill. [http://top40.about.com/od/singles/gr/wakeuphduff.htm "Wake Up - Hilary Duff"] . . Retrieved .]

"Wake Up" was more successful outside the U.S. It was released in the UK in late October and debuted at number seven, Duff's highest position on the singles chart there; [Sexton, Paul. [http://www.billboard.com/bbcom/news/article_display.jsp?vnu_content_id=1001392548 "Westlife, Robbie Williams Top U.K. Charts"] . "Billboard". . Retrieved .] it stayed in the top forty for six weeks. In , it peaked inside the top five in its third week, and in , it reached number fifteen, remaining in the top forty for eleven weeks. Its success across most of was limited: in , it reached the top five, but it peaked outside the top twenty in (where it remained on the chart for nineteen weeks), and the , and it did not reach the top forty in , or . "Wake Up" is the Most Successful song by any artist in the Hollywood Records Label in the UK, with the highest peak position at #7.

The for "Wake Up" was directed by , who had directed videos for and . Duff said she was "a huge fan" of the bands with whom he had worked, so she "was really excited" about his participation in the video. She described the style of the video as "kind of grainy" and "a totally different look for me." Filmed in , [Staff report. [http://www.mtv.com/news/articles/1504107/20050614/jackson_michael.jhtml "For The Record: Quick News On Michael Jackson, Green Day, Primus, Tori Amos, Bjork, Jane's Addiction & More"] . . . Retrieved .] it shows Duff leaving her home and journeying to nightclubs and parties in , , and . Duff said the video "moves really quickly" and "has all [these] quick pops ... it just shows that no matter where you are, people want [to do] the same things: they dance and they party". In each different city she is seen sporting a different look; for example, in Tokyo she wears a black wig, the experience of which inspired her to dye her hair dark after her tour.