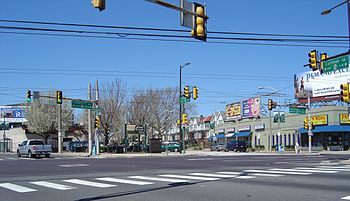 The intersection of Frankford and Cottman Avenues in Mayfair

Mayfair is a neighborhood located in the Lower Northeast section of Philadelphia, Pennsylvania centered on the intersection of Cottman and Frankford Avenues.[1] It is bordered by Tacony to the south and east, Holmesburg to the east, Pennypack Park to the north, and Oxford Circle and Rhawnhurst to the west.[2]

Before development in the 1920's, Mayfair was essentially farmland and home to The Edwin Forrest Home for Children (near present day Frankford and Shelmire Avenue) and The Oxford and Lower Dublin Poor House (west of present day Rowland and Sheffield Aves). First established in 1929, Mayfair came to fruition in the years following World War II as a community that provided fresher and more spacious living in an urban environment. It was constructed over farmland surrounded by the established neighborhoods of Tacony, Holmesburg and Fox Chase. Mayfair featured several groundbreaking concepts for city dwellers: bigger rowhomes with yards in the front and parking garages in the back. The automobile became the primary mode of transportation and shopping retail centers became available close to home, as shopping districts developed along Roosevelt Boulevard and Cottman Avenue. Development also served to connect the surrounding neighborhoods of the Northeast that had previously been isolated. In these regards, Mayfair was a forerunner to American suburbanization, an early part of the population shift from the inner city to its outer regions.

From October 1950 to September 1985, Concord Roller Rink was operated by the Lescas family at 7049 Frankford Avenue.

As of the 2000 census, the tracts covering most of Mayfair[3] had a population of 33,514 people, 95% white and mostly in owner-occupied rowhomes.[4] About 90 percent of the population was born in Pennsylvania.

Mayfair is widely known for its association with Irish-American culture and has long been a bastion of the Philadelphia Irish. During the 2000 census, 14,682 people noted Irish ancestry, including 11,100 who claimed it as their primary ancestry. Other claimed ancestries of note were German (7,069), Italian (6,067), Polish (3,512), and English (2,442).[5] Like most of the city's Northeast, the demographics of the area have experienced an increase in diversification since 2000, with the integration of Asians, Arabs, Blacks and Hispanics in the communities.