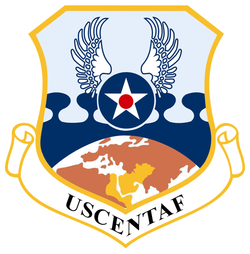 United States Air Force units were initially deployed to Saudi Arabia in August 1990, being assigned directly to CENTAF with a mission to defend the kingdom.

In November 1990 the decision was made to convert the CENTAF defense force into an offensive-capable force and additional units were ordered deployed to CENTAF. As a result CENTAF formed a table of organization which established provisional Air Divisions to prevent too many units reporting directly to HQ CENTAF:

After the end of combat operations, most of the combat forces of CENTAF returned to their home stations. The provisional organizations established were inactivated; their temporary nature meaning that no official lineage or history was retained by the USAF. The residual units remaining active in the CENTAF AOR, were placed under the newly-established 4404th Composite Wing (Provisional) that was formed at King Khalid Air Base, Riyadh, Saudi Arabia on 1 May 1991 to replace the provisional Air Divisions.

The units that remained in Saudi Arabia and Kuwait were charged with the mission to enforce the cease-fire agreement with Iraq which ended Operation Desert Storm; Operation Southern Watch. (Operation Provide Comfort and later Operation Northern Watch were commanded by the US European Command (EUCOM)). USAF units remained in Saudi Arabia until 26 August 2003, when U.S. officials transferred control of portions of Prince Sultan Air Base to Saudi officials at a ceremony and the 363d Air Expeditionary Wing was inactivated.

Headquarters: King Abdul Aziz Air Base, Jeddah, Saudi Arabia
20 B-52G Stratofortresses. The lead unit within the 1708th BW (P) was the 524th BS/379th BW from Wurtsmith AFB, Michigan. Aircraft and crews were also drawn from the 62d and 596th BS/2d BW Barksdale AFB, Louisiana; 69th BS/42d BW at Loring AFB, Maine; 328th BS/93d BW, Castle AFB, California, and the 668th BS/416 BW at Griffiss AFB, New York. B-52 operations at Jeddah were not possible prior to the initiation of combat so the wing gained its aircraft when the conflict began. Six aircraft from the 42d BW were moved to Jeddah from Diego Garcia on 17 January, and 10 more flew in from Wurthsmith, attacking targets en-route. Although launched from Wurtsmith and flown by 379th BW crews, three of the aircraft came from the 93d BW at Castle and two from the 42d BW at Loring.