The Loose Stream sometimes called the River Loose or Langley Stream is a tributary of the River Medway notable for the number of watermills that it powered in its short length. It rises in Langley, flows through Boughton Monchelsea, Loose and enters the Medway at Tovil. The river valley is deep sided, and there is much evidence of the paper and wool trades which once flourished here: the stream has been dammed in many places, resulting in many mill ponds. [1]

The ancient manor of Brishing Court was the site of a mill.[2]

This mill took its name from the shape of the mill pond. It was in the ownership of the Wilson family in the 1870s. In its later life the mill was converted into three cottages, now demolished. The head of water being some 12 feet (3.66 m) to 15 feet (4.57 m) indicates an overshot waterwheel.[3][4]

This was a corn mill, probably the one mentioned by Lambarde. It had an overshot waterwheel driving three pairs of millstones, and was working until the First World War but subsequently demolished.[2][5]

This mill was attached to the manor of Pymps Court in the sixteenth century. It was then a fulling mill. Later it was a paper mill and latterly a corn mill with was converted into a house in 1912, the waterwheel and machinery being scrapped.[2][5]

This was a fulling mill, later a paper mill. The overshot waterwheel was replaced by a turbine but the pentrough remained. Papermaking had ceased before the First World War. [5]

This was once a washing (fulling) mill, converted to corn milling by the mid nineteenth century. The present building dates from c.1880 and last worked c.1892, Mrs Marsham, the owner gave notice to the miller that she wished to terminate his tenancy in April 1891. The mill was extended and converted into a house shortly after. The last miller was a Mr. Wilson, with Tom Bates preceding him. A Mr. Rose, foreman at Little Ivy Mill was one of the first inhabitants of the converted mill. The mill pond was some 300 feet (91 m) long and 70 feet (21 m) wide, giving an area of 2,333 square yards (1,951 m2). The frame of the cast iron waterwheel, some 12 feet (3.66 m) diameter and 8 feet (2.44 m) wide remains under the building.[2][5][6][7] 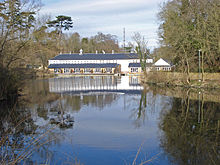 Hayle Mill from the South

This has been the site of a mill for many centuries. The last mill was a paper mill, built in 1808 and was noted for its hand-made paper until production ceased in 1987. The mill was bought by John Green in 1817 and remained in the Green family until 2002. In 1905, Herbert Green raised objections to the building of the Headcorn & Maidstone Junction Light Railway, the extension of the Kent & East Sussex Railway, a short portion of which was built as far as Tovil. His main objection was that the smoke from the locomotives would interfere with the operation of his mill. The eventual granting of the Light Railway Order involved a tunnel which was considerably longer than that which was originally proposed, a fact which pleased Mr. Green, who prophesised that "the longer the tunnel the less chance the line would be built." 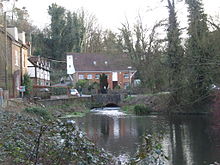 The seventeenth century structure latterly had a cast iron overshot waterwheel driving pumping machinery, working until the 1960s. The derelict waterwheel survived in the early 1970s and has now been restored, the mill buildings being house converted c.1975. Both the Crisbrook mills were the property of the dean and chapter of Canterbury. The ancient spelling of these mills was 'Christbrook/Chrisbrook'.[2][5][7][13]

This late eighteenth century mill housed an internal water wheel; it was a corn mill c.1719. It had an overshot waterwheel driving four pairs of millstones. The mill last worked in 1905 and the machinery scrapped some thirty years later. An earlier mill on this site was probably the mill leased by the prior of Canterbury to Robert De Hucham. Only parts of the walls remain today.[2][5]

A small stream enters the river at Loose, it powered a watermill.

Watermill on the tributary

Originally a fulling mill, then a paper mill, latterly a corn mill with an overshot waterwheel driving three pairs of stones. This mill was in the ownership of the Wilson family in the 1870s. It closed in 1908 and has since been demolished.[2][5]

Located to the south-east of Maidstone, the Loose Valley forms the boundary between the urban area of Maidstone and the surrounding countryside. Due to the large number of ponds, the Loose stream and extensive areas of semi improved grassland, it is a haven for wildlife.

The water quality of the stream has been classified by the Environment Agency as ‘very good’ close to its confluence with the River Medway at Tovil.

The eastern side of the Valley starts as heavily grazed horse pasture. It then becomes a series of long narrow fields bordered by scrub/woodland on the upper edges of the Valley, which are very lightly grazed by cattle. This section of the Valley is owned by the Loose Amenities Association and is managed purely for wildlife, landscape and recreation. It was designated a Conservation Area in Sept 2000. [15] The village pond in Loose was recently surveyed and contained a mixture of the following species: Water mint, Meadowsweet, Common reed mace, Water dropwort, Bittersweet, Yellow iris, Branched bur reed, Greater tussock sedge, Brooklime, Water figwort, Water forget-me-not, Great willowherb, Flag iris and Marsh marigold. [15]

On the dry calcareous semi improved grasslands of the upper valley Meadow vetchling, Meadow-pea, and Bird's-foot trefoil are found. In the transitional scrub, Hawthorn, Blackthorn and Rose are found. It is an extremely valuable habitat and supports species such as dormouse, warblers and butterflies.

The woodland of the Loose Valley contains species such as Oak, Ash, sycamore, Hazel and Sweet Chestnut.[15]