Shorepower (also known as cold ironing, shore power or shore supply, especially in the UK) is a power source from land used to power marine vessels when in a harbor. The term can also be applied to aircraft or land-based vehicles (such as campers, heavy trucks with sleeping compartments and tour buses ), which may have power requirements when main engines are not operating for idle reduction.

The source for land-based power may be an electric utility company, but also possibly a diesel driven generator. Shorepower may also be supplied by renewable energy sources such as wind or solar.

Some of the reasons for using shorepower are:

For small private boats, the power supply used is usually the same as regular household electric power. Some small craft may not need electric power while docked, or may have on-board generators or solar panels sufficient to run a small battery-operated system. Boats that are connected to shorepower only need sufficient battery capacity that last until the next shorepower connection.

Batteries on a vessel may be used to power an inverter (SMPS) capable of producing AC which can be used for appliances that requires AC power. 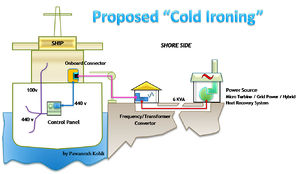 Cold ironing[1] (or AMP - Alternative Maritime Power) is the process of providing shoreside electrical power to a ship at berth while its main and auxiliary engines are turned off. Cold ironing permits emergency equipment, refrigeration, cooling, heating, lighting and other equipment to receive continuous electrical power while the ship loads or unloads its cargo.

Cold ironing is a shipping industry term that first came into use when all ships had coal-fired engines. When a ship tied up at port there was no need to continue to feed the fire and the iron engines would literally cool down, eventually going completely cold – hence the term "cold ironing".

A ship can cold iron by simply connecting to another ship's power supply – a process the US Navy and other navies have practised for many years – or from a shoreside power source. Recently cold ironing has been looked to as a means to mitigate air pollution by significantly reducing, and in some cases completely eliminating, harmful emissions from diesel engines.

Unlike navy vessels, commercial ships do not sustain long port stays, and stay on power generated internally through diesel powered generators (auxiliary engines). As ships traditionally were not subject to emissions control, since the days of diesel powered ships research was largely focused on using cheaper forms of fuel to run their engines.

As a result ships throughout the world have been using Heavy Fuel Oil – residual petroleum – as the optimal choice of fuel. This fuel, the reverse of gas oils (which are derived through distillation of crude oil), is high on particulate matter; and studies show that a single ship can produce emissions equal to the same amount as 50 million cars annually.

Further research [2] indicates 60,000 cardio-pulmonary mortalities due to particulate matter from ship emissions. These deaths have been detected far inland, due to prevailing wind conditions. The total world trading fleet stands at 50,000+ merchant ships (Lloyds data as of January 2008). Each ship spends some 100 days in port in a year.

For every kilowatt-hour (kW h) of electricity, about 200 gm of bunker fuel is consumed. Each 1kg of bunker oil =3.125kg of carbon dioxide. It is assessed that globally ships use 411,223,484 tonnes of fuel annually.

Keeping these reports in mind, new regulatory norms have been mandated by the International Maritime Organization (IMO). The level of sulphur is one of the benchmarks in measuring quality of fuel and Marpol Annex VI requires use of <4.5% sulphur fuel, effective 2010. The target is to reduce world maritime sulphur output to <0.5% by 2020. Some regions (e.g. California) already require ships switch to cleaner fuel when in their local waters.

Cold ironing does away with the need to burn fossil fuel onboard ships while they are docked. In this concept, ships visiting ports are hooked on to local grid power – or other – power sources which are already regulated by local pollution norms. This shore-sourced power serves the ship’s cargo handling machinery and hotelling requirements. Effectively, all generating sources are shut down and ship is hence cold-ironed.

This brings immediate relief from pollution by shipboard emissions and allows a more holistic maintenance schedule to be followed by ship operators, which are typically hard put to maintain planned maintenance schedules due to commercial operating pressures. 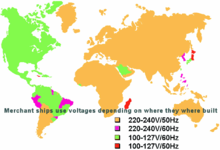 Different power forms may be used to transfer electrical energy from port to the ship:

High voltage reduces the overall conductor size required or overall mass of the cable, and so reduces handling labor. One obstacle is the use of different frequencies like 60 Hz instead of 50 Hz, which may cost 300 000 - 500 000 EUR to convert, where required. Some vessels are rated to run on both 50 Hz and 60 Hz, typically where this is the case only critical appliances and equipment will run, that are rated for both frequencies.

The amount of power for an ocean-going ship is usually 2,0 - 10 MW.[3] Cable to connect larger ships may cost 20 - 25 EUR/meter. Transformer substations cost 15 000 - 30 000 EUR. Operation and maintenance costs of the onboard auxiliary engines are estimated to be around 4 EUR/MWh for electricity generated. Fuel cost for sea diesel, with sulphur content less than 0,5% cost approximately 18 EUR/MWh (12 months sliding average in 2005).

To ensure that galvanic corrosion doesn't occur an isolation transformer that provides galvanic isolation should be used, because the power grid and on board earth potential may differ.[4]

Connecting or disconnecting 400 V AC cables can take between 30 minutes to a couple of hours due to cable bulkiness. Thus increasing the voltage and putting a portable transformer at the end might be worthwhile for the benefit of a lower cable area and thus lighter conductors can be used. This affects the minimum amount of time shore time required to make it worthwhile.[5]

Ships, built in diverse international yards, have no uniform voltage and frequency requirement. Some ships use 220 volts at 50 Hz, some at 60 Hz, some others use 110 volts. Primary distribution voltage can vary from 440 volts to 11 kilovolts.

Load requirement varies from ship to ship and ranges from a few hundred kW in case of car carriers to a dozen or more MW in case of passenger ships or reefer ships.

Connectors and cables are not internationally standardised, though work has progressed in this direction. There are other legal implications to outsourcing primary power source (see article).[1]

All these problems are addressable and work has already begun in reducing ship emissions by cold ironing.[6]

Shore power, as it relates to the trucking industry, is commonly referred to as "Truck Stop Electrification" (TSE). The US Environmental Protection Agency estimates that trucks plugging in versus idling on diesel fuel could save as much as 3240 US$ annually.[7] There are currently 138 truck stops[8] in the USA that offer on-board systems (also called Shore power) or off-board systems (also called single system electrification) for an hourly fee.

Similar to shore power for ships, a ground power unit may be used to supply electric power for an aircraft on the ground, to sustain interior lighting, ventilation and other requirements before starting of the main engines or the aircraft auxiliary power unit. This may be a self-contained engine-generator set, or it may convert commercial power to the voltage and frequency needed for the aircraft.