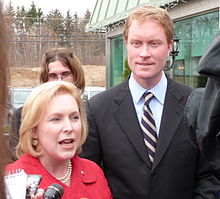 Kirsten Gillibrand was appointed to the United States Senate, replacing Hillary Clinton, who resigned to become United States Secretary of State. A special election was held to fill her House seat on March 31, with Republican James Tedisco and Democrat Scott Murphy the two candidates. After the two finished in a near tie on election night, absentee ballots turned up a 700 vote margin for Murphy, despite the ballots being sent out to far more Republicans than Democrats. Murphy won the seat.

John M. McHugh was nominated to become United States Secretary of the Army, necessitating a special election to fill his seat. Democratic Candidate Bill Owens won the special election on November 3, 2009 defeating the Conservative Candidate Doug Hoffman and the Republican Candidate Dierdre Scozzafava, which as a result, marks the first time that a Democrat represented parts of this district since the Civil War.[1]

There were no state-wide elections in 2009.

Albany Mayor Gerald Jennings is expected to run for reelection. However he will likely face a very competitive primary. Councilman Corey Ellis, President of the Common Council Shawn Morris and Reverend Valerie Faust will run against Mayor Jennings.

Buffalo Mayor Byron Brown is eligible to run for reelection.

Rochester mayor "Bob" Duffy will be running for reelection and said so on March 22, 2009. His opponent has not yet been announced