Nuclear magnetic resonance (NMR) in porous media covers the application of using NMR as a tool to study the structure of porous media and various processes occurring in them.[1] This technique allows the determination of characteristics such as the porosity and pore size distribution, the permeability, the water saturation, the wettability, etc. An example of this is the development of the NMR well logging device for measuring nuclear magnetic properties of fluids in underground porous sediments.[2]

Microscopically the volume of a single pore in a porous media may be divided into two regions; surface area S and bulk volume V (Figure 1). 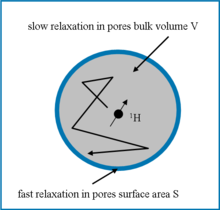 The NMR signal intensity in the T2 distribution plot reflected by the measured amplitude of the NMR signal is proportional to the total amount of hydrogen nuclei, while the relaxation time depends on the interaction between the nuclear spins and the surroundings. In a characteristic pore containing e.g. water, the bulk water exhibits a single exponential decay. The water close to the pore wall surface exhibits faster T2 relaxation time for this characteristic pore size

NMR techniques are typically used to predict permeability for ﬂuid typing and to obtain formation porosity, which is independent of mineralogy. The former application uses a surface-relaxation mechanism to relate measured relaxation spectra with surface-to-volume ratios of pores, and the latter is used to estimate permeability. The common approach is based on the model proposed by Brownstein and Tarr.[5] They have shown that, in the fast diffusion limit, given by the expression:

where ρ is the surface relaxivity of pore wall material, r is the radius of the spherical pore and D is the bulk diffusivity. The connection between NMR relaxation measurements and petrophysical parameters such as permeability stems from the strong effect that the rock surface has on promoting magnetic relaxation. For a single pore, the magnetic decay as a function of time is described by a single exponential:

where M0 is the initial magnetization and the transverse relaxation time T2 is given by:

Real rocks contain an assembly of interconnected pores of different sizes. The pores are connected through small and narrow pore throats (i.e. links) that restrict interpore diffusion. If interpore diffusion is negligible, each pore can be considered to be distinct and the magnetization within individual pores decays independently of the magnetization in neighbouring pores. The decay can thus be described as:

where ai is the volume fraction of pores of size i that decays with relaxation time T2i. The multi-exponential representation corresponds to a division of the pore space into n main groups based on S / V (surface-to-volume ratio) values. Due to the pore size variations, a non-linear optimization algorithm with multi-exponential terms is used to fit experimental data.[6] Usually, a weighted geometric mean, T2lm, of the relaxation times is used for permeability correlations:

T2lm is thus related to an average S / V or pore size. Commonly used NMR permeability correlations as proposed by Dunn et al. are of the form[7]:

where Φ is the porosity of the rock. The exponents b and c are usually taken as four and two, respectively. Correlations of this form can be rationalized from the Kozeny–Carman equation:

by assuming that the tortuosity τ is proportional to Φ1 − b. However, it is well known that tortuosity is not only a function of porosity. It also depends on the formation factor F = τ / Φ. The formation factor can be obtained from resistivity logs and is usually readily available. This has given rise to permeability correlations of the form:

Standard values for the exponents b = − 1 and c = 2, respectively. Intuitively, correlations of this form are a better model since it incorporates tortuosity information through F.

with the initial condition

where D0 is the self-diffusion coefficient. The governing diffusion equation can be solved by a 3D random walk algorithm. Initially, the walkers are launched at random positions in the pore space. At each time step, Δt, they advance from their current position, x(t), to a new position, x(t + Δt), by taking steps of fixed length ε in a randomly chosen direction. The time step is given by:

The new position is given by

represent the randomly selected direction for each random walker in spherical coordinates. It can be noted that θ must be distributed uniformly in the range (0,π). If a walker encounters a pore-solid interface, it is killed with a finite probability δ. The killing probability δ is related to the surface relaxation strength by:[10]

If the walker survives, it simply bounces off the interface and its position does not change. At each time step, the fraction p(t) of the initial walkers that are still alive is recorded. Since the walkers move with equal probability in all directions, the above algorithm is valid as long as there is no magnetic gradient in the system.

where γ is the ratio of the Larmor frequency to the magnetic field intensity. The total magnetization amplitude as a function of time is then given as:

NMR as a tool to measure wettability

NMR Cryoporometry (NMRC) is a recent technique for measuring total porosity and pore size distributions. It makes use of the Gibbs-Thomson effect : small crystals of a liquid in the pores melt at a lower temperature than the bulk liquid : The melting point depression is inversely proportional to the pore size. The technique is closely related to that of the use of gas adsorption to measure pore sizes (Kelvin equation). Both techniques are particular cases of the Gibbs Equations (Josiah Willard Gibbs): the Kelvin Equation is the constant temperature case, and the Gibbs-Thomson Equation is the constant pressure case. [13]

To make a Cryoporometry measurement, a liquid is imbibed into the porous sample, the sample cooled until all the liquid is frozen, and then warmed slowly while measuring the quantity of the liquid that has melted. Thus it is similar to DSC thermoporosimetry, but has higher resolution, as the signal detection does not rely on transient heat flows, and the measurement can be made arbitrarily slowly. It is suitable for measuring pore diameters in the range 2 nm–2 μm.

Nuclear Magnetic Resonance (NMR) may be used as a convenient method of measuring the quantity of liquid that has melted, as a function of temperature, making use of the fact that the T2 relaxation time in a frozen material is usually much shorter than that in a mobile liquid. The technique was developed at the University of Kent in the UK. [14] It is also possible to adapt the basic NMRC experiment to provide structural resolution in spatially-dependent pore size distributions,[15] or to provide behavioural information about the confined liquid.[16]