The Office of Federal Contract Compliance Programs (OFCCP) is part of the U.S. Department of Labor. OFCCP is responsible for ensuring that employers doing business with the Federal government comply with the laws and regulations requiring nondiscrimination. This mission is based on the underlying principle that employment opportunities generated by Federal dollars should be available to all Americans on an equitable and fair basis.

OFCCP administers and enforces three legal authorities that require equal employment opportunity: Executive Order 11246, as amended; Section 503 of the Rehabilitation Act of 1973, as amended; and the Vietnam Era Veterans' Readjustment Assistance Act of 1974, as amended, 38 U.S.C. 4212. These authorities prohibit Federal contractors and subcontractors from discriminating on the basis of race, color, religion, sex, national origin, disability, and protected veteran status. They also require Federal contractors and subcontractors to take affirmative action to ensure equal employment opportunity in their employment processes. Its regulations can be found at CFR Title 41 Chapter 60: Public Contracts and Property Management. 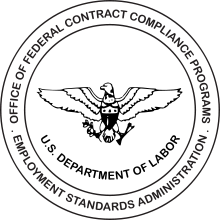 The origins of the agency trace back to President Franklin D. Roosevelt and World War II when he signed Executive Order 8802, preventing discrimination based on race by government contractors.

In 1961 President Kennedy issued Executive Order 10925 which created the President’s Committee on Equal Employment Opportunity. This called for people to take affirmative action to ensure that applicants are hired and employees are treated during employment without regards to race, creed, color or national origin.

Executive Order 11375 by President Richard Nixon in 1968 added sex discrimination to OFCCP’s mandate. In 1975 the name was changed from OFCC to OFCCP by President Gerald Ford. This reflected the addition of the responsibility to enforce laws prohibiting discrimination against the disabled and veterans.