The “Micromegas “ (Micro-MEsh Gaseous Structure) detector is a gaseous particle detector coming from the development of wire chamber. Invented in 1992[1] by Georges Charpak and Ioannis Giomataris, the Micromegas detectors are mainly used in experimental physics, in particular in particle physics, nuclear physics and astrophysics for the detection of ionising particles. 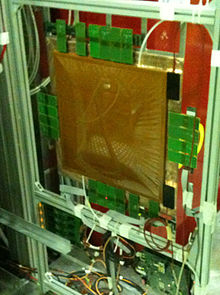 A Micromegas detector in function on the COMPASS spectrometer

The Micromegas are light detectors in order to minimize the perturbation on the impinging particle. From their small amplification gap, they have fast signals in the order of 100 nanoseconds. They are precise detectors with a spatial resolution below one hundred of micrometer[2]. Nowadays, the use of the Micromegas technology is growing over the different fields of experimental physics. 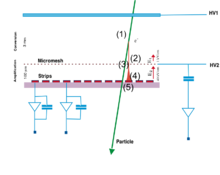 Working principle of a Micromegas detector.

A particle detector is used to detect a passing particle and obtain information such as its position, arrival time and momentum. In experimental physics, the particle is usually coming from a particle accelerator but it can also come from space (cosmic ray) or from a nuclear reactor.

The Micromegas detector, as every gaseous detector, detects particles by amplifying the charges that have been created by ionisation in the gas volume. In a Micromegas detector, this gas volume is divided in two by a metallic micro-mesh (“Micromesh” on the schematic) placed between 25μm and 150μm of the readout electrode (Strips on the schematic). The micro-mesh is the key element since it allows, at the same time, a high gain of 104 with and a fast signal of 100ns.

While passing through the detector, a particle will ionise the gas atoms by pulling up an electron creating an electron/ion pair (1). When no electric field is applied, the ion/electron pair recombines and nothing happen. But here, within an electric field in the order of 400V.cm − 1 the electron will drift (2) toward the amplification electrode (the mesh) and the ion toward the cathode. When the electron arrives closed to the mesh (3), it enters an intense electric field (typically in the order of 4kV.cm − 1) in the amplification gap. Accelerated by this field, the electron reaches enough energy to produce ion/electron pairs that will also ionise the gas, creating pairs; it’s the avalanche effect (4). By this mean, it’s several thousand of pairs that are created from an hundred of primary charges coming from by the interaction with the impinging particle. The primary charges need to be multiplied to create a significant signal. A last, we read the electronic signal on the readout electrode (5) by a charge amplifier. The readout electrode is usually segmented in strips and/or pixels in order to obtain the position of the impinging particle in the detector. The amplitude and the shape of the signal, read via the electronic on the readout electrode, gives information on the time and energy of the particle.

Analog signal of a Micromegas 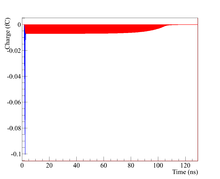 Signal induced on the readout electrode of a Micromegas detector (Simulation). The blue curve shows the part of the signal induced by electrons and the red one by ions.

The signal is induced by the movement of charges between the micro-mesh and the readout electrode (this volume is called the amplification gap). The 100 nanoseconds signal consists of an electron peak (blue) and an ion tail (red). Since the electron mobility in gas is over 1000 times faster than the ion mobility, the electronic signal is much shorter (below 3ns) than the ionic one. That is why it is used to measure precisely the time. The ionic signal caries more than half of the signal and is used to reconstruct the energy of the particle.

In 1991, to improve the detection of hadrons at the Hadron Blind Detector experiment[3], I. Giomataris and G. Charpak reduced the amplification gap of a parallel plate detector (a type of spark chamber) in order to speed up the signal. A 1 mm amplification gap prototype was build for the HDB experiment but the gain was not uniform enough to be used in the experiment. The millimetre gap was not enough controlled and created large gain fluctuations. Nevertheless the benefits of a reduce amplification gap has been demonstrated and the Micro-Mesh gaseous structure or Micromegas concept was born in October 1992, shortly before the announcement of the Nobel prize attribution to Georges Charpak for the invention of the wire chambers. Georges Charpak used to say that this detector and some other new concepts belonging to the family of micro-pattern gaseous detectors (MPGDs) will revolutionise nuclear and particle physics just as his detector did[4].

The Micromegas technology research and development

Since 1992, at the CEA Saclay and at CERN, the Micromegas technology has been developed in order to obtain more stable, reliable, precise and faster detectors. In 2001, twelve large Micromegas detectors plane of

) were used for the first time in a large scale experiment at COMPASS[5] situated on the Super Proton Synchrotron accelerator at CERN. Since 2002 they have been detecting millions of different particles per seconds and still continue today.

Another example of the development of the Micromegas detectors is the invention of the “bulk” technology. The “bulk” technology consists of the integration of the micro-mesh with the printed circuit board (that carries the readout electrodes) in order to build a monolithic detector. Such a detector is very robust and can be produce within an industrial process (a successful try has been conducted with the 3M firm in 2006[6]) allowing public applications. For instance, by modifying the micro-mesh in order to make it photo-sensitive to UV light, the Micromegas can be used to prevent forest fires[7]. 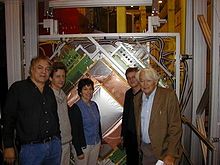 One the first experiment with Micromegas detectors: COMPASS. On this 2001 pictures, we see Georges Charpak and the COMPASS Saclay team in front of the large Micromegas chambers.

The Micromegas detectors are now used in several experiments :