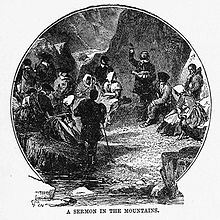 "A sermon in the mountains" 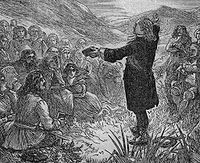 The Conventicle Act of 1664 was an Act of the Parliament of England (16 Charles II c. 4) that forbade conventicles (religious assemblies of more than five people outside the auspices of the Church of England). This law was part of the Clarendon Code, named after Edward Hyde, 1st Earl of Clarendon, which aimed to discourage nonconformism and to strengthen the position of the Established Church. However the Clarendon Code was not actually the work of Clarendon himself, who favoured a policy of greater tolerance towards dissenters.[2] These prohibitions led many, such as the Covenanters, to vacate their parishes rather than submit to the new Episcopal authorities. Just as the ministers left so too did the congregations, following their old pastors to sermons on the hillside. From small beginnings these field assemblies-or conventicles-were to grow into major problems of public order for the government.

Other statutes that were part of the Clarendon Code include:

The operation of these laws at least as far as Protestants were concerned was mitigated somewhat by Charles II's Royal Declaration of Indulgence in 1672, which suspended the execution of penal laws and allowed a certain number of non-conformist chapels to be staffed and constructed, with the pastors subject to royal approval.

The Conventicle Act and Five Mile Act were repealed in 1689.

(The '16 Charles II c. 2' nomenclature is reference to the statute book of the numbered year of the reign of the named King in the stated chapter. This is the method used for Acts of Parliament from before 1962.)

Although aimed at Nonconformists, when the Conventical Act was passed, the Jews led by their new rabbi, Jacob Sasportas, took their anxieties to Charles II, who told them, ‘laughing and spitting’, not to worry; later the Privy Council put it in writing that Jews could ‘promise themselves the effects of the same favour as formerly they have had, so long as they demean themselves peaceably and quietly, with due obedience to His Majesty’s laws and without scandal to his government’. Thus the English Jews, by an act of omission, as it were, became full citizens, subject to no more disabilities than those inherent in their own unwillingness, like Catholics and Nonconformists, to belong to the Church of England or, in their particular case, to swear Christian oaths.[3]