Mehrabad International Airport (Persian: فرودگاه مهرآباد) (IATA: THR, ICAO: OIII) is an airport that serves Tehran, Iran. It was the primary airport of Tehran in both international and domestic passenger traffic but has been replaced by Imam Khomeini International Airport (IKA) in most of its international flights. It is still by far the busiest airport in Iran in terms of passenger traffic and aircraft movements, handling 12,094,218 passengers in 2009. The airport is located inside the city boundaries and is thus much easier to access than IKA. 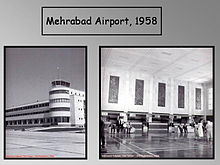 The airport was first time used as an airfield for aviation club planes in 1938, then after World War II along with becoming internationally recognized by joining Iran civil aviation organization to the ICAO in 1949, the airport also became an air force base. Newly delivered Republic F-84G Thunderjets (fighter) and Lockheed T-33A Shooting Star (trainer) arrived, May 1957 and April 1956, respectively. Iranian Air Force. In 1955 just after construction of first asphalt paved runway a new terminal building (Current Terminal 1) for both international and domestic flights was designed and constructed. Among the designers of the initial modern buildings of the airport was the famous architect William Pereira.[3][4] 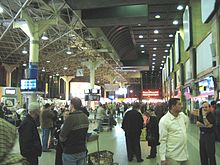 Mehrabad International Airport consists of six terminals, with Terminals 1, 3 and 5 only used during Haj and Umrah seasons. Most other airlines operate out of Terminals 4 and 6, except of Iran Air, Iran Air Tours and ATA Air, which are based at Terminal 2. Cargo flights are also handled at Terminal 2 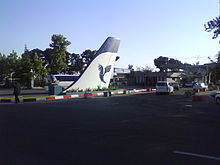 The airport has the head offices of Iran Air and the Iran Civil Aviation Organization.[5][6][7]