Therese Mathilde Amalie of Mecklenburg was born in Hanover the daughter of Duke Charles of Mecklenburg and his first wife Princess Friederike of Hesse-Darmstadt.

Therese married Karl Alexander, Hereditary Prince of Thurn and Taxis, son of Karl Anselm, 4th Prince of Thurn and Taxis and his wife Duchess Auguste of Württemberg, on 25 May 1789 in Neustrelitz, Mecklenburg-Strelitz.[1][2] Therese's paternal aunt Queen Charlotte and her husband George III of the United Kingdom helped broker the marriage, in particular ensuring that Therese would be able to keep her Protestant faith.[3] Therese and Karl Alexander had seven children:[1][2]

Therese also had illegitimate issue by Maximilian, Graf von und zu Lerchenfeld auf Köfering und Schönberg (München, 17 January 1772 – Kassel, 19 October 1809), who married on 25 May 1789 Maria Anna Philippine Walburga Groschlag von Dieburg, by whom he had one son; one was created Graf von Stockau; the others were surnamed von Stargard.[4] Children include:

In 1790 Anne-César, Chevalier de la Luzerne, the French ambassador to Great Britain, reported that Therese's husband was being considered for the new throne of the Austrian Netherlands and that Therese's aunt Queen Charlotte would support this; these turned out to be unfounded rumors, as Charlotte and her husband George III believed Karl Alexander of insufficient rank for kingship.[3] After the mediatization of the Principality of Thurn and Taxis to the Kingdom of Bavaria in 1806 during the German Mediatisations, the end of the Holy Roman Empire and creation of the Confederation of the Rhine, and the subsequent end of the Imperial Reichspost, Therese's initiative and negotiating skills were influential in maintaining the Thurn and Taxis-run postal system as the private company, Thurn-und-Taxis-Post. Like her sister, Louise, Queen consort of Prussia, she failed in their negotiations with Napoleon I of France, but during the Congress of Vienna, she was successful in enforcing the interests of the Thurn and Taxis family.

Therese and Karl Alexander had their first residence (until 1797) in the Palais Thurn und Taxis in Frankfurt am Main. Early on in their marriage, Therese took over her young husband's representational tasks. After her father-in-law's resignation as Post Master General and Principal Commissioner of the Perpetual Imperial Diet at Regensburg, Therese's husband Karl Alexander became Principal Commissioner in 1797. Therese took an active role in the administration of the Princely House and lands as well as the postal administration and was also devoted to art and literature.[6] She hosted in her salon poets and writers including Jean Paul, Friedrich Rückert, Johann Kaspar Lavater, and Friedrich Gottlieb Klopstock.[7] 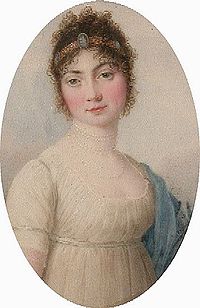 The Hereditary Princess of Thurn and Taxis, oil on canvas by Carlo Restallino, Regensburg in 1800.

Only with the predictable demise of the Imperial Reichspost, the German Mediatisations of 1803, the mediatization of the Princely House of Thurn and Taxis, and the loss of position of Post Master General in the time of Napoleon I of France, Therese became outwardly politically active, most especially after the death of her father-in-law in 1805. Since then, Therese reinforced the sovereignty of the Princely House of Thurn and Taxis and its traditional postal rights. In 1806, she and her husband negotiated with her brother-in-law Frederick William III of Prussia along with Karl Theodor Anton Maria von Dalberg, the former Archbishop-Elector of Mainz and Prince-Primate of Regensburg, and for the first time in 1807 with Napoleon. Likewise, they also negotiated with Maximilian I Joseph of Bavaria in Munich and proposed to him the nationalization of the Thurn and Taxis Lehnspost there. In 1808, Therese and her husband took the interests of the Princely House of Thurn and Taxis to the Congress of Erfurt. There, a secret meeting occurred between Charles Maurice de Talleyrand-Périgord and Alexander I of Russia in her salon.[8]

After fruitless negotiations in Erfurt were lost, Therese traveled at the end of 1809 to Paris, where she met with Napoleon concerning the future status of the Princely House of Thurn and Taxis, the withdrawal of the media, and the re-acquisition of rights to the postal system. From this trip survives a correspondence with her husband Karl Alexander in which he laments the impoverishment of the House of Thurn and Taxis and asks Therese to limit her expenses.[9] Through their negotiations with Napoleon, the Princely House of Thurn and Taxis was offered to relocate to Paris. The negotiations failed, however, perhaps because the correspondence with her sister Queen Louise of Prussia fell into the hands of the French authorities.[9]

After the defeat and exile of Napoleon, Therese took the interests of the Princely House to the Congress of Vienna in 1814 where many political negotiations took place between Talleyrand, Tsar Alexander I, Klemens Wenzel, Prince von Metternich, and other political leaders in her salon. Not least because of Article 17 of the Federal Act from the year 1815, the revenue of the former post offices of the House of Thurn and Taxis in several states of the German Confederation as a legitimate claim was established. Private postal services were established and were intended to have a reasonable compensation obligation to the Princely House of Thurn and Taxis.[10]

Duchess Therese died in Taxis, Regensburg, at the age of 65.

Media related to Therese of Mecklenburg-Strelitz at Wikimedia Commons