Diospyros kaki, better known as the Japanese Persimmon, Kaki Persimmon (kaki [柿]) or Asian Persimmon in North America, is the most widely cultivated species of the Diospyros genus. Although its first published botanical description was not until 1780,[1][2] the kaki is also among the oldest plants in cultivation, known for its use in China for more than 2000 years.

The persimmon (kaki) is a sweet, slightly tangy fruit with a soft to occasionally fibrous texture. This species, native to China, is deciduous, with broad, stiff leaves. Cultivation of the fruit extended first to other parts of east Asia, and was later introduced to California and southern Europe in the 19th century, to Brazil in the 1890s[3], and numerous cultivars have been selected. A variety is Diospyros kaki var. sylvestris Makino.

In many cultivars, known as the astringent varieties, the fruit has a high tannin content which makes the immature fruit astringent and bitter. The tannin levels are reduced as the fruit matures. It is not edible in its crisp firm state, but has its best flavor when allowed to rest and soften after harvest. It has a delicious soft jelly-like consistency, and is best eaten with a spoon. The Japanese cultivar 'Hachiya' is a widely grown astringent cultivar. Some cultivars, such as Fuyu, do not contain tannins when firm, and can be eaten like an apple, or can be allowed to go to any stage of ripeness, including to the jelly-like stage. These non-astringent varieties are considered to have a less complex flavor.[4]

When ripe, this fruit comprises thick pulpy jelly encased in a waxy thin skinned shell. "Sharon Fruit" (named originally after Sharon plain in Israel) is the trade name for D. kaki fruit whose astringency has been chemically removed.[5] It is also known as the "Korean mango". 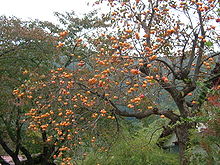 The kaki tree reaches a size of up to ten meters. It is similar in shape to an apple tree. Its deciduous leaves are medium to dark green, broadly lanceolate, stiff and equally wide as long. It blooms from May to June. Trees are typically either male or female, but some produce both types of flowers. Furthermore, the sexual expression of a tree may vary from year to year. Unusually, the kaki fruits are ripe when the leaves have already fallen off the tree are for the most part (October–November).

Kaki trees typically do not bear until they are 3 to 6 years old. The 2-2.5 cm wide flowers appear in the spring. Female flowers have a creamy yellow color and tend to grow singly while male flowers have a pink tint and tend to appear in threes. On occasion, bisexual flowers also occur. The flowers have four crown-shaped sepals and 4 petals. Some varieties (parthenocarpic) will produce seedless fruit in the absence of pollination but if their flowers are pollinated, they will produce larger fruit riddled with seeds.

The spherical to oval fruit bearing the indented stem and four sepals, can weigh up to 500 grams. The smooth, shiny and thin shell ranges in shade from yellow to red-orange. The slightly lighter fleshed fruits can contain up to eight seeds and may have an astringent taste. With increasing maturity, the fruit softens, similar to a kiwi.

The high content of tannin in the still-immature kaki provides a bitter component reminiscent of pear and apricot flavors, which becomes weaker with progressive maturation. The furry taste, caused by the tannins, is often reduced during the ripening process, or by frost. The very high proportion of beta-carotene (provitamin A) makes the kaki fruit nutritionally valuable. 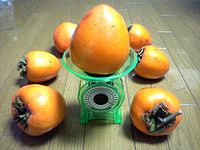 Variety "Koushu-Hyakume" (astringent - for making it a dried Kaki)

Kaki are grown worldwide, with 90 percent of production in China, Japan and Korea. In East Asia the main harvest time for kaki is in the months of October and November. The trees have already lost their leaves by the time of harvest. Occasionally, the brightly colored fruit is left unharvested on the tree as a decorative effect.

In China, kaki has been cultivated since time immemorial. It is considered to have four virtues: it lives long, it gives a large area of shade, it is used by the birds as a nesting place, and it is not attacked by pests. A vase adorned with a kaki cake, a pine branch and an orange is a symbol of the desire "great happiness in 100 affairs".

Throughout Asia, different healing properties are attributed to the kaki. They are said to be helpful against stomach ailments and diarrhea. Immature fruits are said to be a treatment for fever, if they ripen in containers until they are sweet as honey. The juice of unripe fruit is said to lower the blood pressure and the fruit stem to relieve a cough. To reinforce these effects, the fruit is peeled before use, exposed to the sunlight during the day and to the dew at night, until a white powder coating forms.

Cultivation of this species at first spread through East Asia. Since the 19th century, kaki partially replaced date-plum (Diospyros lotus, also known as Caucasian persimmon) in some countries of South Europe and West Asia, because kaki has bigger fruits than date-plum; cultivation in California also began at that time.

The "Sharon" is a variegated form of Kaki from Israel, named after the fertile Plain of Sharon. It does not contain seeds and tastes more mild, since it clearly contains less tannin. Cross cut, the Sharon shows a star-shaped pattern of lines with darker flesh.

In Spain, there is a variegated form of Kaki, the "Ribera del Xuquer" of the Valencia region.

Remove the leaves before serving. The skin can be eaten (especially when the fruit is ripe and the tannins are almost completely decomposed), but many also remove the skin before eating. Also dried (after skinning & rinsing with shochu or after leaving 24hrs in hot spring water). 2 fruits are attached by a string which is then hung over a pole.