Delčevo (Macedonian: Делчево) is a municipality in eastern Republic of Macedonia. Delčevo is also the name of the town where the municipal seat is found. Delčevo Municipality is part of the Eastern Statistical Region. 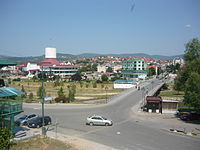 The town of Delčevo, seat of the municipality

Ethnic groups in the municipality include:

The number of inhabited places is 22, one town and 21 villages.