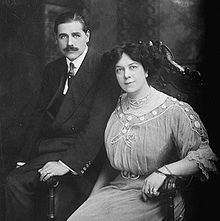 Land of Hope and Glory sung by Clara Butt in 1911

Dame Clara Ellen Butt DBE (1 February 1872 – 23 January 1936), sometimes called Clara Butt-Rumford after her marriage, was an English contralto with a remarkably imposing voice and a surprisingly agile singing technique. Her main career was as a recitalist and concert singer.

Clara Butt was born in Southwick, Sussex. Her father, Henry Albert Butt, was a sea captain who had been born in 1848 in Saint Martin, Jersey, Channel Islands. He married Clara Hook in 1869. She was born in Shoreham, the daughter of Joseph Hook, another mariner. (See the relevant British Census returns for 1861 and 1871.)

In 1880, the Butt family moved to the port city of Bristol in England's West Country, and Clara was educated at South Bristol High School, where her singing ability was recognised and her talent as a performer encouraged. At the request of her headmistress, she was trained by the bass Daniel Rootham and joined the Bristol Festival Chorus, of which he was musical director. Butt won a scholarship to the Royal College of Music in January 1890. During her fourth year of vocal lessons at the college she spent three months studying in Paris at the expense of Queen Victoria. She also studied in Berlin and Italy.

She made her professional début at the Royal Albert Hall in London in Sir Arthur Sullivan’s cantata The Golden Legend. This took place on 7 December 1892. Three days later, she appeared as Orfeo in Gluck’s Orfeo ed Euridice at the Lyceum Theatre. Then music critic Bernard Shaw wrote in The World that she ‘far surpassed the utmost expectations that could reasonably be entertained’ (14 December 1892).

She returned to Paris and undertook further studies with Jacques Bouhy (the teacher of two other deep-voiced female singers with international reputations, Louise Homer and Louise Kirkby Lunn). Later, she polished her skills in Berlin with the famous retired soprano Etelka Gerster. The French composer Camille Saint-Saëns heard her, and wanted her to study his opera Dalila, but due to laws then extant forbidding the representation of biblical subjects on the British stage, nothing came of it.

Soon she had acquired an excellent reputation for her vocal attributes back home in England, which was reinforced by her physical presence on the concert platform: she was 6 feet 2 inches tall. She made many gramophone recordings, often accompanied by the (uncredited) pianist Miss Lillian Bryant. Among Butt's recordings are several recordings of Arthur Sullivan's song "The Lost Chord",[1] and her friend Fanny Ronalds, in her 1916 will, bequeathed the original manuscript of the song to Butt.[2] She was primarily a concert singer and only ever appeared in two opera productions, both of Gluck's Orfeo ed Euridice, mounted in 1892 and 1920. Britain's leading composer of the era, Sir Edward Elgar, composed his Sea Pictures for contralto and orchestra with Clara Butt in mind as the soloist, and she sang at the first performance of the work at the Norwich Festival on 5 October 1899, with the composer conducting.

In 1900 she married the baritone Kennerly Rumford and, thereafter, would often appear with him in concerts. The couple eventually had three children, two sons and a daughter. Besides singing in many important festivals and concerts, she was honoured with royal commands to appear before Queen Victoria, King Edward VII, and King George V. She made tours of Australia, Japan, Canada, the United States and to many European cities.

During the First World War, she organised and sang in many concerts for service charities, and for this she was appointed Dame Commander of the Order of the British Empire (DBE) in the 1920 civilian war honours. That year she sang four performances of Gluck's Orfeo ed Euridice at Covent Garden, with Miriam Licette, under the baton of Sir Thomas Beecham.[3] According to The Times she 'played fast and loose with the time and spoilt the phrasing' and it appears not to have been a success. It was her only appearance in grand opera.

Butt's three sisters were also singers. One, Ethel Hook, became a famous contralto in her own right, made some solo recordings, and in 1926 appeared in an early sound film made in the Lee De Forest Phonofilm sound-on-film process.

In later life, Clara Butt was dogged by tragedies. Her elder son died of meningitis while still at school, and the younger one committed suicide. During the 1920s, she became seriously ill with cancer of the spine. She made many of her later records seated in a wheelchair. She died in 1936, age 63, at her home in North Stoke, Oxfordshire, reportedly as a result of an accident she had suffered in 1931. It is not clear how ill she was with the spinal cancer at the time of her death. Her voice can still be heard on CD transfers of her 78-rpm recordings.

Sir Thomas Beecham once said, jokingly, of Butt that: "On a clear day, you could have heard her across the English Channel".

Indeed, not all serious musicians admired her booming contralto voice, which can be mistaken for a man's on some recordings, or her rather 'populist' approach to her art. In his autobiography, conductor Sir Adrian Boult recounts an anecdote about two young music students going for a bicycle ride one afternoon. After a while they stopped and sat making idle conversation on a piece of grass. One rider looked at his bicycle and mused 'I am going to call it Santley because it is a Singer'. (Sir Charles Santley, a veteran baritone, was the most noted British singer of the day, and Singer was the maker of the bicycle.) The other responded 'I am going to call mine Clara Butt because it is not.' He then noticed as they rode home that a frosty atmosphere had developed. He realised the reason for the frostiness when, a short time afterwards, he read in the press that his companion, Robert Kennerly Rumford (1870-1957), was engaged to Clara Butt.